We project emotions on to crows. Being black, their feathers have the Western colour of mourning and they have become associated with impending doom.

Two paintings sum up this projection. In the first of these, Van Gogh’s Wheatfield with Crows of 1890 [1] the colouring is sombre and crows are flying towards us. Although I am not a fan of most of van Gogh’s work, this painting had a powerful impact on me when I first saw it and it is the crows, painted with crude strokes, that carry most of the threat of something bad about to happen. There are more than 40 of them (were they rooks, the close relatives of crows and known to be more social?) and they fly obliquely towards the observer from a distant point in the dark and threatening sky.

The second painting, Boy with a Crow, was completed in 1884 [2], six years earlier than the work by Van Gogh, when the artist, Akseli Gallen-Kallela was just nineteen years old. This painting is less well known than Wheatfield with Crows but it matches it, or even surpasses it, for the threat of bad times, especially as the victim of potential misfortune is also included. A young boy looks over a small patch of ground to something in the distance, but out of the picture. Meanwhile, a solitarily hooded crow is pecking at the ground and looking at the boy with its left eye. That patch of land, probably part of a larger plot, may be essential for grazing by animals and thus survival of a young family, for the climate in Finland is harsh for half of the year and the barefooted boy’s clothes show that his parents are poor. 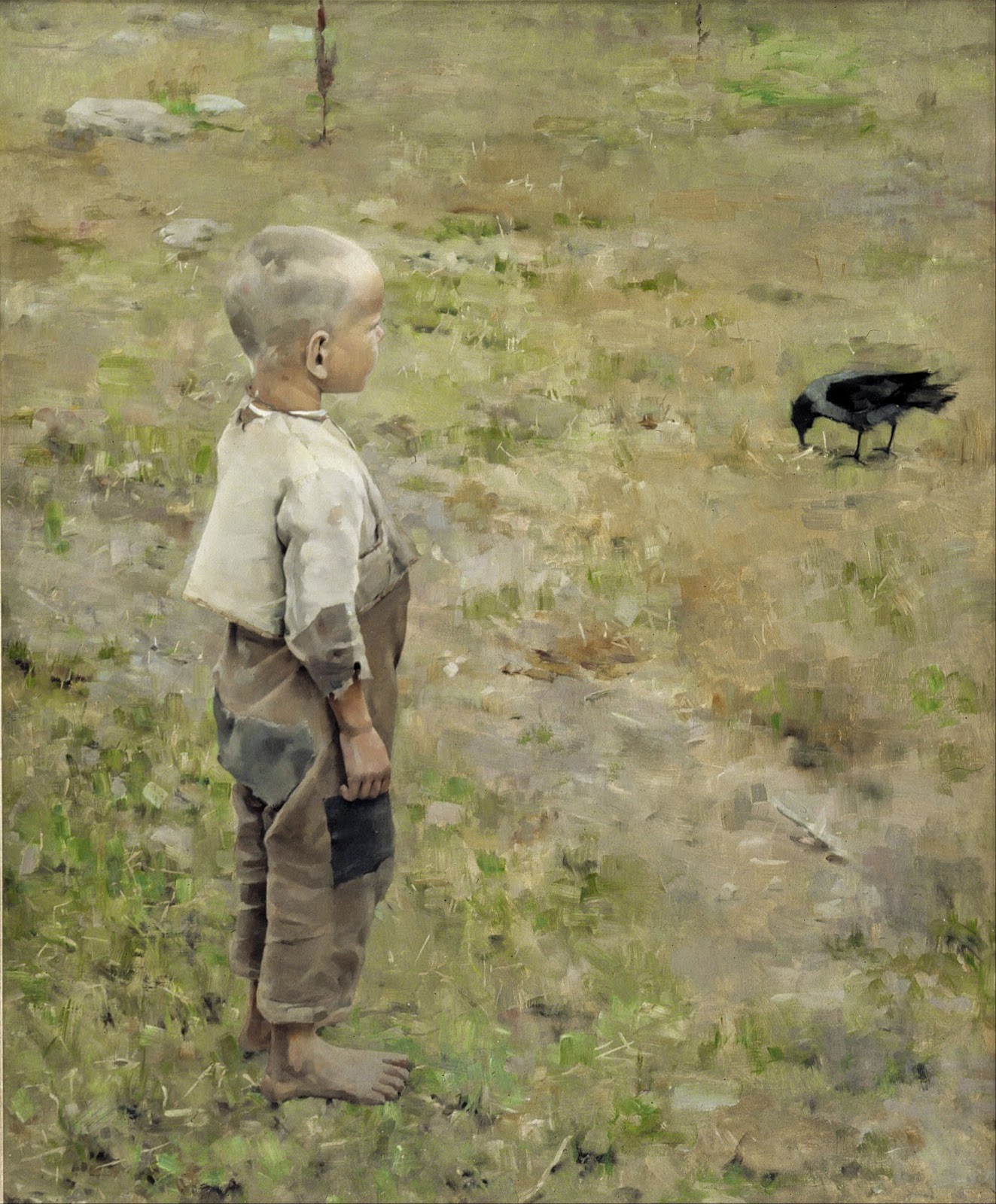 It is not only the black colour of crows that provides a sense of threat, but knowing that they, and their close relatives, feed on carrion, although this is only part of the diet [3, 4]. We have an aversion to carrion, and to animals that feed on dead bodies, while recognising that carrion feeding is an essential part of the normal functioning of ecosystems. Our feelings about feeding on already dead bodies is not confined to crows: compare our admiration for eagles capturing, and killing, their prey with our view of squabbling vultures at the remains of a lion kill and, while mentioning lions, compare our reaction to seeing these big cats bring down a zebra, or wildebeest, with our attitude towards hyenas finishing off the carcase and eating the bones. Eagles and lions are considered noble and powerful (they are even combined in mythical gryphons), whereas vultures and hyenas are somehow skulking and despicable.

Crows are intelligent and successful birds and, like vultures and hyenas, do not deserve their reputation. However, that reputation sticks. Imagine our reaction to Van Gogh’s painting if it was parrots flying towards us, or, in Gallen-Kallela’s masterpiece, if it was a duck that was looking askance at the boy?