A moving discovery in the Royal Albert Memorial Museum


Father and Son by Edmund Gosse is an account of the author’s difficult relationship with his father, the distinguished Natural Historian Philip Henry Gosse. It is regarded by many as an important work of English literature, despite Edmund’s reputation for inaccuracy, and is available as a Penguin Classic. The different personalities, and beliefs, of the two men caused a rift between them, but Edmund acknowledges that there was a time when they were very close. 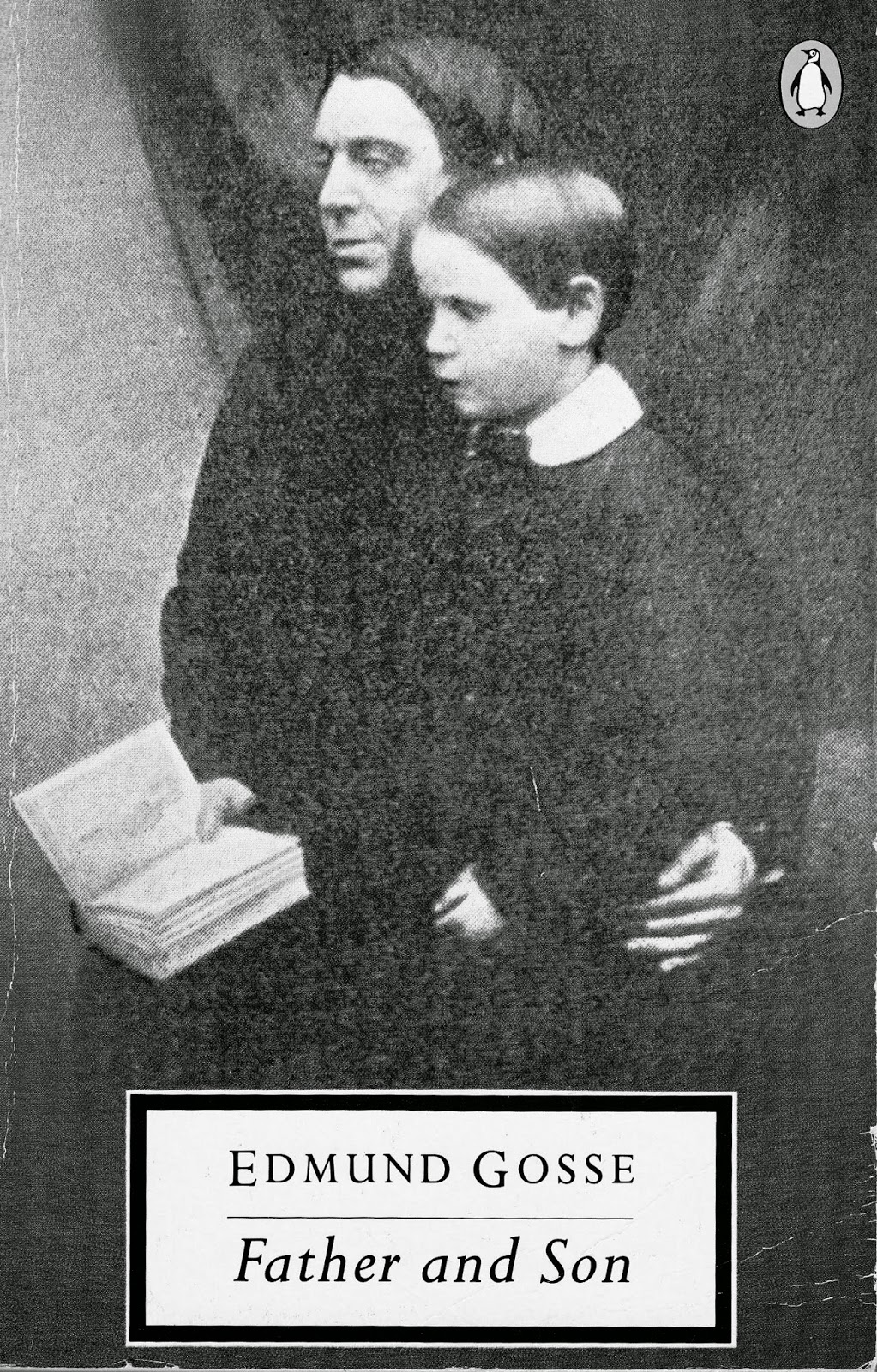 After the death of his wife, Emily, in 1857, Henry Gosse moved to Torquay with Edmund on 23rd September, two days after the boy’s eighth birthday. They lived in a new villa, named Sandhurst, and this had the advantage of being close to the sea and in an area with which Henry had become familiar on previous visits. If the grief of bereavement wasn’t enough to bear, there was also the hostile response to Henry’s book Omphalos, published in November 1857. This was an attempt to reconcile the developing ideas of geological time scales with the account of Creation in the book of Genesis in The Holy Bible, and it pleased neither the religious, or scientific, communities. It is little wonder that the two were drawn closely together and they spent much time collecting animals along the shore, many of which were brought back to Sandhurst and kept in tanks. As Ann Thwaite writes in her biography of Edmund [1]:

Day after day,..the middle-aged widower and the small boy combed the rock pools at Anstey’s Cove, at Oddicombe, at Petit Tor, or took longer excursions to Maiden Combe northwards or Livermead to the south. Edmund was ‘his constant and generally his only companion’.

When Henry was away from Torquay giving lectures, there was a loving correspondence between them, with hugs and kisses sent by both [2]. Then, on Henry’s return, the visits to the shore could re-commence. Once material had been collected, Henry became absorbed in studying them and in making illustrations that would lead to further books. While Henry was busy, Edmund used a small room at the top of the house as his own “study”. He modelled himself on his father and this is what he wrote [3]:

I, the son of a man who looked through a microscope and painted what he saw there, would fain observe for myself, and paint my observations. It did not follow, alas! that I was built to be a miniature-painter or a savant, but the activity of a childish intelligence was shown by my desire to copy the results of such energy as I saw nearest at hand.

In the secular direction, this now took the form of my preparing little monographs on seaside creatures, which were arranged, tabulated and divided as exactly as possible on the pattern of those which my Father was composing for his Actinologica Brittanica. I wrote these out upon sheets of paper of the same size as his printed page, and I adorned them with water-colour plates, meant to emulate his precise and exquisite illustrations. One or two of these ludicrous pastiches are still preserved, and in glancing at them now I wonder, not at any skill that they possess, but at the perseverance and the patience, the evidence of close and persistent labour. I was not set to these tasks by my Father, who, in fact, did not much approve of them. He was touched, too, with the ‘originality’ heresy, and exhorted me not to copy him, but to go out into the garden or the shore and describe something new, in a new way. That was quite impossible; I possessed no initiative. But I can now well understand why my Father, very indulgently and good-temperedly, deprecated these exercises of mine. They took up, and, as he might well think, wasted, an enormous quantity of time; and they were, moreover, parodies, rather than imitations, of his writings,..

Of these efforts by Edmund, Ann Thwaite writes [2]:

It was his greatest pleasure to imitate his father and produce little learned treatises of his own. They were for his father, as is obvious in one of his booklets on butterflies, written and illustrated when he was ten. Under the ‘Green veined White’ he has written: ‘It is common in most places in England, and has been taken in Newfoundland, (by yourself), Europe generally and Siberia.’ 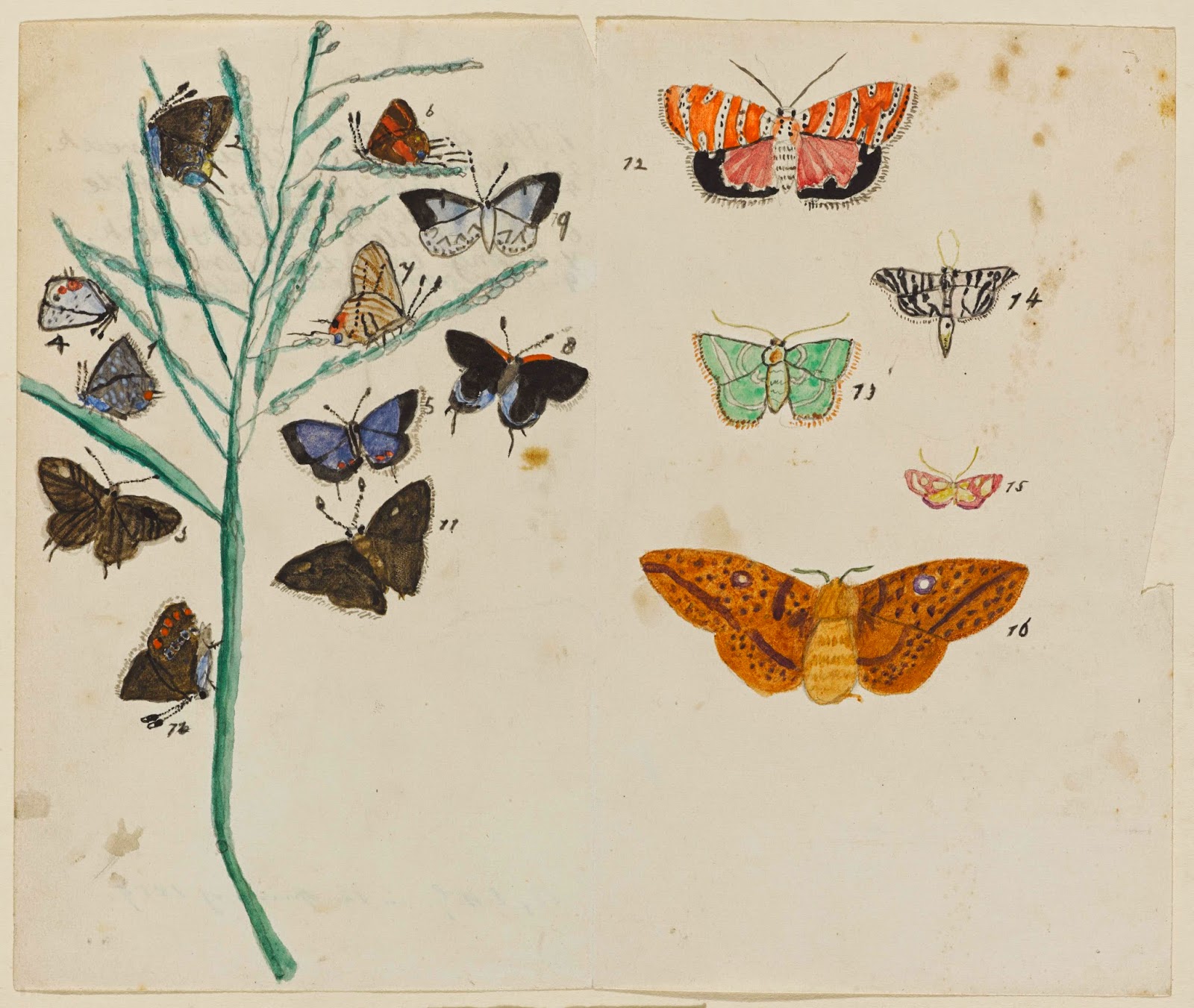 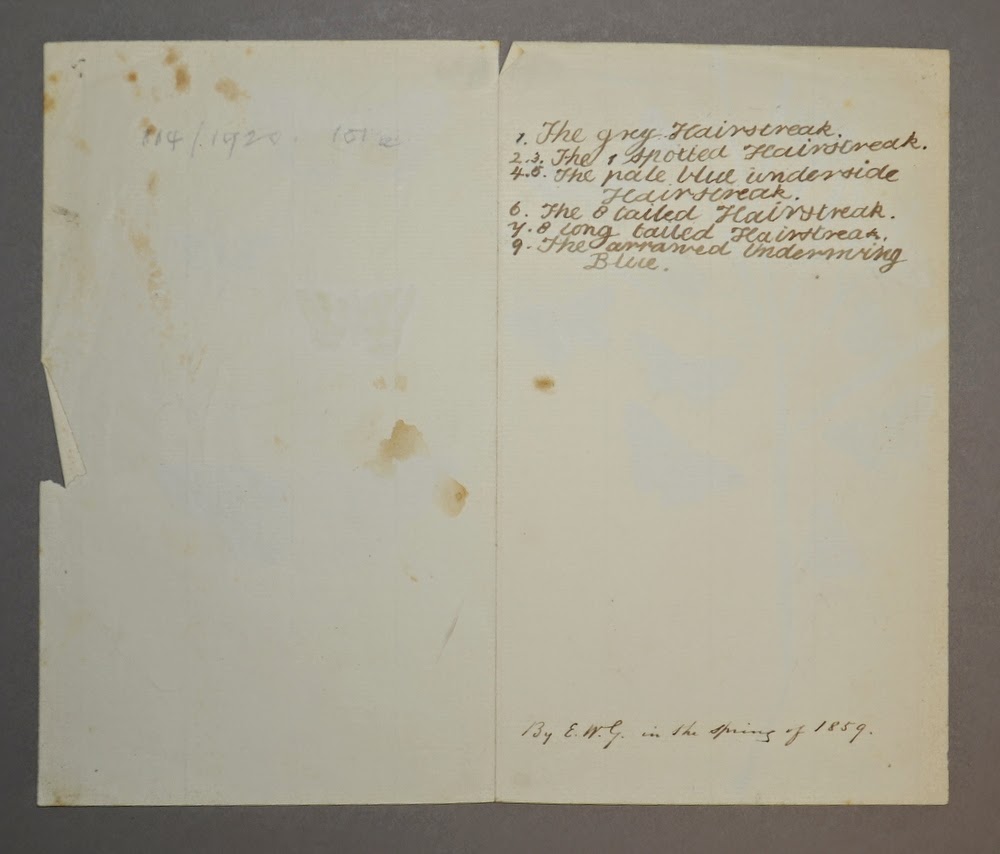 While examining the collection of art works by Henry Gosse held by the Royal Albert Memorial Museum in Exeter, Holly Morgenroth and I discovered one of the sheets of butterfly illustrations made by Edmund (see above). On the reverse, several of the butterflies are named in Edmund's handwriting and, at the bottom of the sheet, Henry wrote “By EWG in the spring of 1859”, so we know that Edmund was 9½ years old when the illustrations were made. They copy the style of unpublished work by Henry Gosse in Entomologia Terra Novae [4], a page from which is shown below. Henry made these paintings in 1833, when he was 23 years old, and they show well his accuracy and love of settings, in this case vegetation. Edmund is likely to have seen these illustrations and they probably formed the basis for his own efforts. Did Henry label, and keep, the sheet by Edmund because it reminded him of his early days, despite his reservations about its quality? 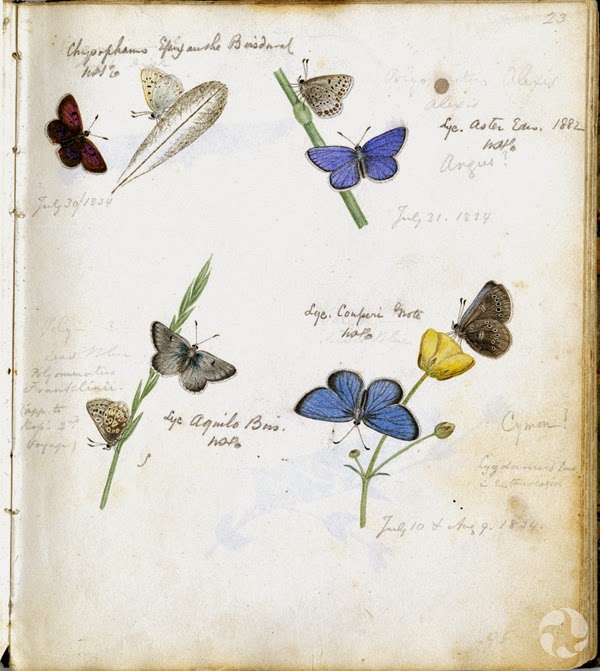 When looking at Edmund’s illustrations in the Museum in Exeter, it was impossible not to feel close to the story of Henry and Edmund in the late 1850s. In October 1859, Edmund was baptised as a member of the Brethren, fulfilling the last wish of his mother and an ever-present wish of his father, both being devout believers. In many ways, this marked a turning point, for it was the rigidity of Henry’s Christian faith, together with developing personality differences, that began the breakdown of the relationship between father and son. The sheet that Holly and I found in the Gosse collection at RAMM is a memento of an earlier, warmly affectionate, time and it is painful to know what was to come.

The illustration of the sheet by Edmund Gosse is reproduced with permission. ©The Royal Albert Memorial Museum, Exeter. Thanks to Holly Morgenroth, the Curator of Natural History, for letting me see the works by Henry and Edmund Gosse that led to this blog post.
Posted by Roger at 07:39