Giotto broke with the Byzantine tradition and used “naturalness” and 3-dimensional portrayals in his work. The sixteenth century biographer Giorgio Vasari writes colourfully about Giotto and his status in the History of Art [1]:

The gratitude which the masters in painting owe to nature - who is ever the truest model of him who, possessing the power to select the brightest parts from her best and loveliest features, employs himself unweariedly in the reproduction of these beauties - this gratitude, I say, is due, in my judgement, to the Florentine painter, Giotto, seeing that he alone - although born amidst incapable artists, and at a time when all good methods in art had long been entombed beneath the ruins of war - yet, by the favour of Heaven, he, I say, alone succeeded in resuscitating art, and restoring her to a path that may be called the true one.

Vasari goes on to describe how the young Giotto, drawing on stones while looking after his father’s sheep, was seen by Cimabue who marvelled at his natural skill and took him into his studio. Giotto soon eclipsed his master and later became much in demand as a painter of religious subjects in chapels and other holy places, among the most famous works being the frescoes in the Capella della Scrovegni (Arena Chapel) in Padua [2]. 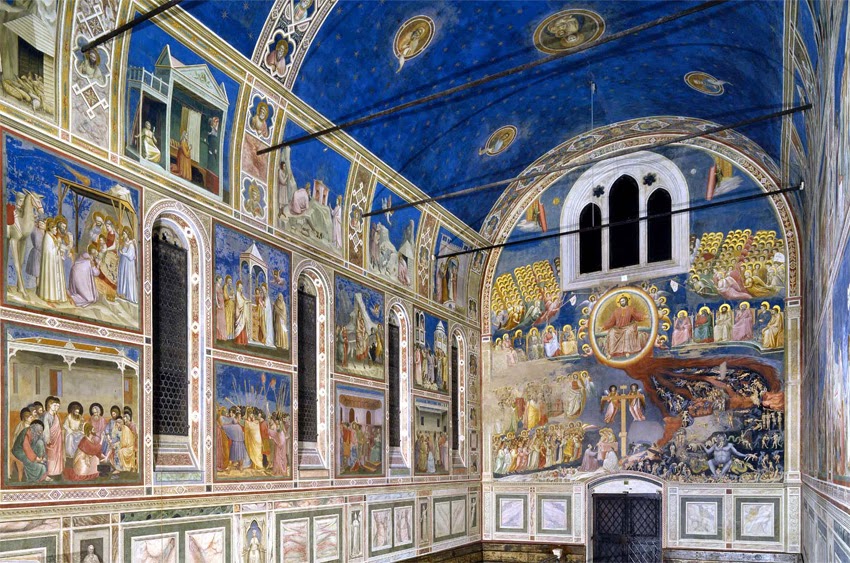 Although the main human figures in each of the frescoes demonstrate the ability of a great artist, I am drawn to the angels (some of which are shown below), especially those described by Anne Holmes that “float like modern hang-gliders” [3].

Having discussed the inability of angels to use flapping flight (unless they fly by mystical forces) [4], Giotto’s hang-glider angels are of special interest to me, as it is implied that they use gliding flight. Their costumes break up around their base as the angels fly rapidly toward Earth and this was probably intended to convey speed and not, as one wag suggested, the first signs of burning up on entry into the Earth’s atmosphere. Giotto liked “jests and witty retorts” [1] but this is unlikely to be one of them. He was a close observer of the sky and “painted the first naturalistic depiction of a comet in his scene of the Adoration of the Magi [see below]” [5], so it is not inconceivable that his idea for the breaking up of the angels’ costumes came from observations of meteors. 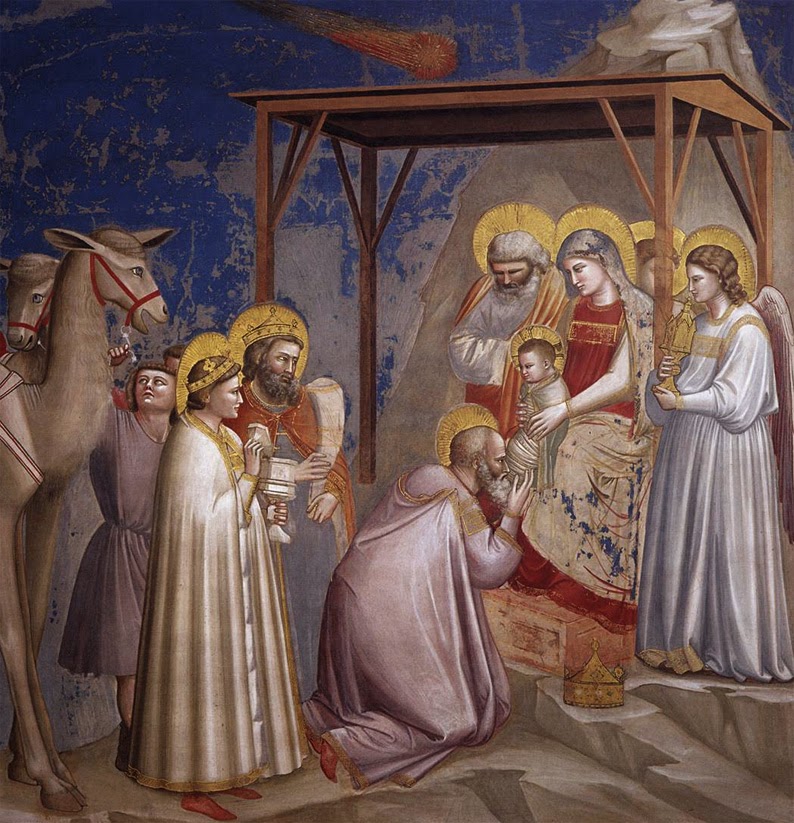 The late Sidney J. Blatt, the distinguished psychologist at Yale University, turned a psychoanalyst’s eye on the Giotto frescoes in Padua and on the artist’s use of naturalness [6].  He writes:

Giotto was influenced by the Franciscan Weltanschauung, and his narrative frescoes in the Scrovegni Chapel present biblical stories as human situations with which the viewer could identify. Saints were portrayed not only as remote, transcendental spirits but as people who experienced a wide range of emotions, from pleasure to anguish, joy to despair.. ..Giotto’s figures have depth and volume, are presented from various vantage points including profile, rear, and three-quarter views, and express vivid emotion in their gestures and facial expressions.. ..Giotto’s visual narratives enabled the illiterate to become more familiar with biblical stories. His realism reduced the distance between man and God by representing religious narratives not as sacred stories but as natural, spontaneous interactions among people.

The main focus of our attention in the frescoes are the events unfolding on Earth, but the angels also show facial expressions, albeit not in the detail of the figures on the ground. If Giotto was trying to convey emotions, what was going through the mind of the angel that seems to show pain, or horror, at having to pull up near vertically (see below)? The wag mentioned earlier suggested it might be because the angel was going into a dangerous stall and needed to recover, but this facetious comment does little to answer the question. 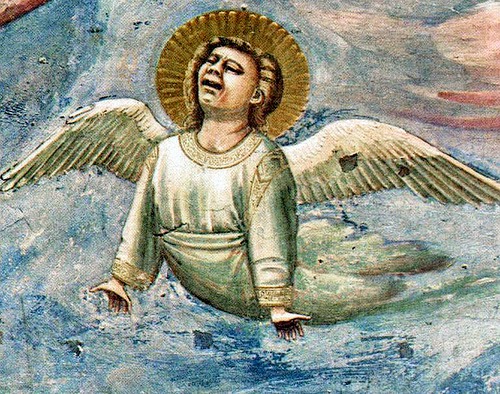 Further in his article, Blatt [6] points out that:

..Giotto alluded to infinity.. ..by using celestial blue as the background color of his Padua frescoes rather than the reflective, impenetrable gold used so often in medieval art.. ..The suggestion of infinity of nature in Giotto’s Padua frescoes was an important step in the replacement of the closed world of the ancients by the open world of the moderns. The Giotto frescoes implicitly encourage man not to be terrified of infinity or to leave it to God but to try to comprehend and use it as a fundamental concept in the study of nature, not only in art, but in literature, philosophy, mathematics, and science as well.

This is a profound comment and ties Giotto to the beginnings of the “Scientific Revolution” at the beginning of the Renaissance. However, religious subjects provide a challenge. For example, where was Heaven? The idea of angels with bird wings makes Heaven feel close to the Earth, and angels could then commute relatively easily. Winged angels appear in art from ancient times and Giotto continues that tradition, as did subsequent artists, and we are still happy with this imagery today. Does that mean we feel that Heaven is a real place - and are comforted that it is nearby? If so, where is it? 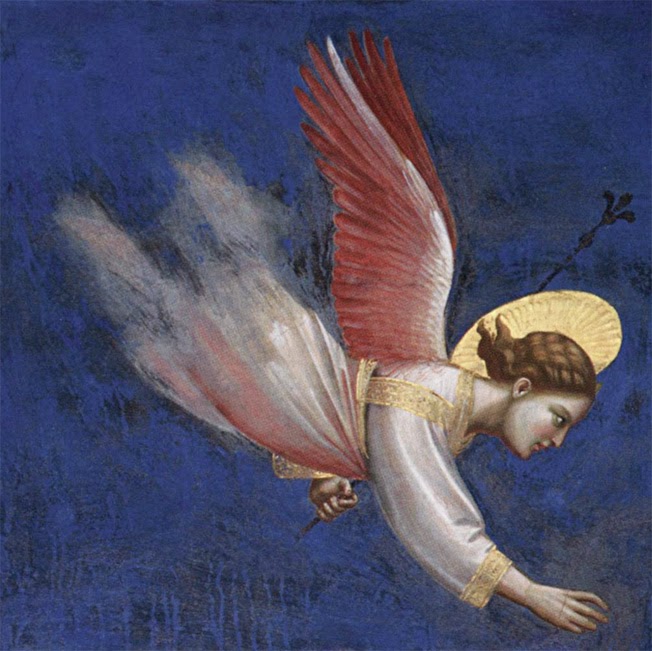 [6] Sidney J. Blatt (1994) A psychoanalytic appreciation of Giotto’s mode of artistic representation and its implications for Renaissance Art and Science. The Psychoanalytic Study of the Child 49: 365-393.