As a child, I was fascinated by Natural History, and visits to the shore and to the countryside were supplemented by watching programmes on our newly-acquired Radio Rentals black-and-white TV. David Attenborough’s Zoo Quest series were among my favourites, but it was another Attenborough programme that had the strongest effect on me: this was People of Paradise 2. Cargo Cult, first broadcast on 28th April 1960 [1]. I was thirteen years old when I first saw the programme; at a time when I was questioning my religious beliefs. Our family had always attended Winner Street Baptist Church in Paignton but, by April 1960, I had left the church as I found it too parochial. My father insisted that I should still attend some form of Christian worship, so I became a regular attendee at the local Crusaders Union sessions on Sunday afternoons in Paignton YMCA. 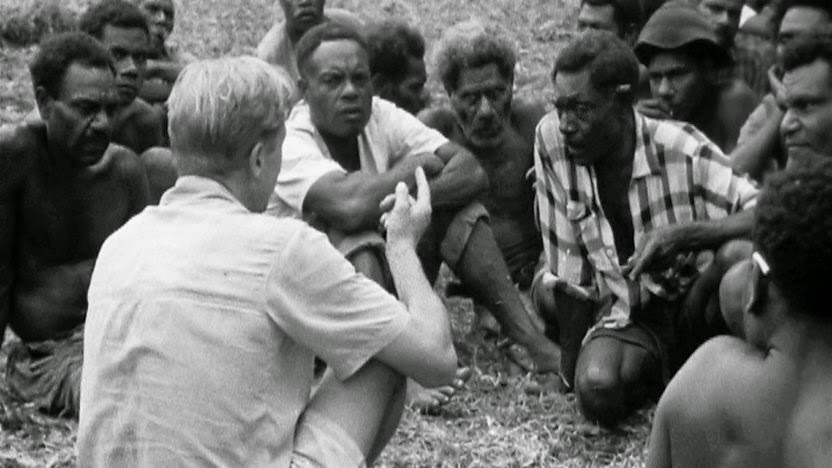 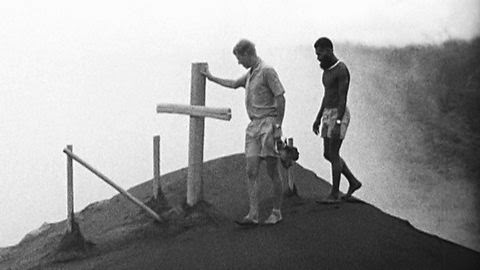 People of Paradise 2 focussed on the John Frum cult on Tanna in the New Hebrides (now Vanuatu) and Attenborough began by interviewing an Australian copra trader. He recalled an uprising of the John Frum cult members who carried bamboo models of carbines, complete with bayonets, and had USA painted in red on their chests (both practices continuing today, see below). As we travelled across the island in the programme, we were shown many clearings with red crosses surrounded by fences and near Sulphur Bay, a centre of the cult, a strange enclosure containing a statue of John Frum, a large model of an aircraft with four engines and a cage containing a crudely carved model of a winged rat. There followed an interview with “Nambas”, the chief of the community at Sulphur Bay who was the leader of the John Frum cult on the island. “Nambas” said that he was in contact with John Frum by radio and he had been told that Attenborough and his colleague would be arriving by fast ’plane. The radio was not like white-man’s radio as it did not have wires, but Attenborough was not allowed to see it. “Nambas” then explained that John Frum would come with cargo and this would be “everything” that white people had, the precursor being that all money had to be thrown away, which they had done. When asked about the cross on the lip of the active volcano, “Nambas” said that this was erected because there were many men (soldiers) inside the volcano and these were mostly white, but also contained some red and some black people (the crosses presumably acted as guides and the red colour was of the clothing, replicated among followers of the cult). 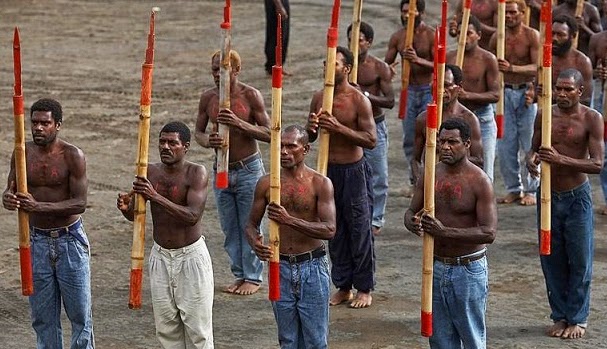 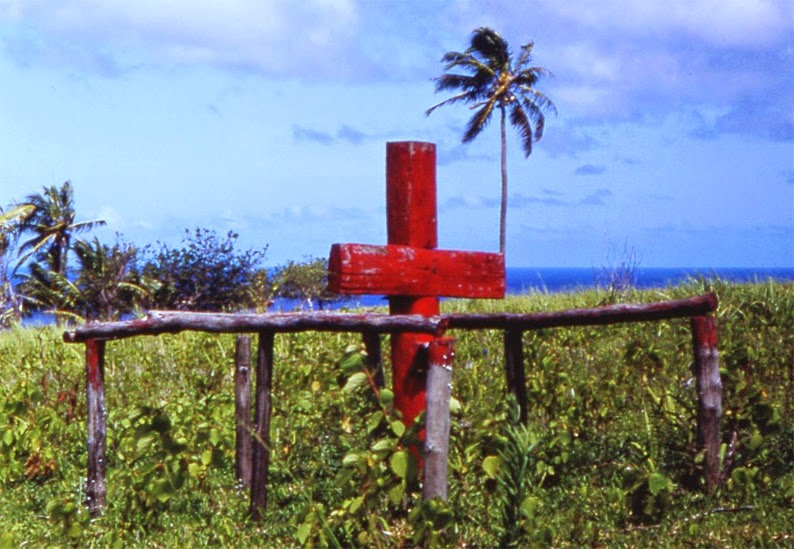 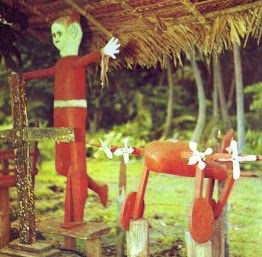 As someone living a small-town life in South Devon, the TV programme made a strong impression on me and I was not alone, as Richard Dawkins refers to the interview between David Attenborough and “Nambas” in The God Delusion [2], giving some details that were not included in the original broadcast. I was amazed at the imagination shown by my fellow humans. They had borrowed some ideas from Christianity - the imagery, the idea of John Frum as a saviour who would bring rewards - and superimposed them on the cargo cults that arose in Melanesia after native peoples saw traders coming with ships and, latterly, aircraft.

Since re-viewing that programme on BBC iPlayer - I had not seen it since the first broadcast in 1960 - I have had the chance to read more about the John Frum cult. It was given its strongest boost by the building of an airstrip on the neighbouring island of Éfaté as a staging post in the Second World War battles in the Pacific. Men from Tanna were involved in constructing the airstrip and they observed all the materials that were offloaded, stockpiled and distributed by the US military. It was a powerful reinforcement of the ideas of a Cargo Cult and provided the origins of the physical appearance of John Frum, the use of tall masts to convey radio transmissions, and the need for clearings to allow aircraft to land. It is likely that the red crosses over the island were an amalgam of the Christian symbol and the Red Cross that appears on medical supplies. All of the men’s observations were translated into the forms seen on Tanna and the idea of the US military in the volcano tagged on another layer of invention. The cult that developed was thus a mixture of Christian religious traditions, observation of something that was not understood, and existing tribal culture involving kava drinking in special clearings near villages (it should be pointed out that another group on Tanna have Prince Philip as their equivalent of the John Frum character).

According to scholarly research, the first major uprising of the John Frum movement was in May 1941 following a desertion from the Presbyterian Mission [3,4] and Guiart reports that “a new leader was having an aerodrome built in the name of John Frum to enable the new god’s planes to land with their cargoes of soldiers” [3]. Although John Frum is/was white, it is important to note that the residents of Tanna who had helped in the construction of the airfield on Éfaté had seen African Americans [5] and this explains the multi-ethnicity of the soldiers believed by some to inhabit the volcano. How easy it seems to have the basic idea of a supernatural being and then create myths that believers will be rewarded. We know that has happened with the John Frum movement and this still endures, with the cult being used in advertising by the tourism industry [6]. The movement has thus been in existence for over 70 years, with information being passed down from the original elders to a succession of new leaders.

As a thirteen-year old, I found the Attenborough programme so fascinating that I started to question how religions were founded, what ensured their longevity, and what controlled their imagery. There were no easy answers, but those thoughts marked a turning point, as I moved away from Christianity and towards atheism of a reflective, and non-proselytising, variety.

P.S. I give “Nambas” in quotes as this is also the name of the penis sheath traditionally worn by men on Tanna. It have been a pseudonym.