The King James’ Version of The Holy Bible [1] was published in 1611 and remains the most widely-read form of the book. It assumes that readers have a knowledge of different plant and animal types of the Middle East, Northern Africa and Southern Europe (the locations for the narrative) and this is especially true of birds and reptiles. Here are just a few examples of each (with references to Book, Chapter and Verse - there are multiple references to some birds):

Perhaps because they are not as easy to identify, or are less visible, there are fewer references to reptiles:

Dragons are also referred to in The Bible and I wondered whether these were real creatures, like those listed above, or whether they were mythological inventions. My first thought was that dragons could be Nile Crocodiles, as evidenced by the following verses:

....Behold, I am against thee, Pharaoh king of Egypt, the great dragon that lieth in the midst of his rivers.... Ezekiel 29:3

And the parched ground shall become a pool, and the thirsty land springs of water: in the habitation of dragons, where each lay, shall be grass with reeds and rushes. Isaiah 35:7

Both references suggest freshwater habitats are preferred by dragons, yet they are also found in the sea:

Thou didst divide the sea by thy strength: thou breakest the heads of the dragon in the waters. Psalms 74:13

The reports of dragons in the sea are reminiscent of sightings of sea serpents, the source of much speculation in the Nineteenth Century [2]. As no specimens were captured, discussion centred on the reports of sailors and shore observers, with special weight being accorded to the descriptions provided by naval officers. No satisfactory explanation could be agreed upon and that is true of the aquatic dragons described in the excerpts above.

It appears that dragons are also terrestrial, with a liking for undergrowth, and they have the ability to vocalise:

And thorns shall come up in her palaces, nettles and brambles in the fortresses thereof: and it shall be an habitation of dragons.... Isaiah 34:13

And I hated Esau, and laid his mountains and his heritage waste for the dragons of the wilderness. Malachi 1:3

And I beheld another beast coming up out of the earth; and he had two horns like a lamb, and he spake as a dragon. Revelation 13.11

These descriptions take us further away from believing that the author is referring to recognisable animals in the way that he/she did with birds and with reptiles. Indeed, we know that dragons are not just found on Earth:

And there appeared another wonder in heaven; and behold a great red dragon, having seven heads and ten horns, and seven crowns upon his heads. Revelation 12:3

This presents us with one of the problems facing all readers of The Bible - sorting out the factual from the fantastic and allegorical. Unfortunately, I conclude that all records of dragons in the holy book are in the latter categories. 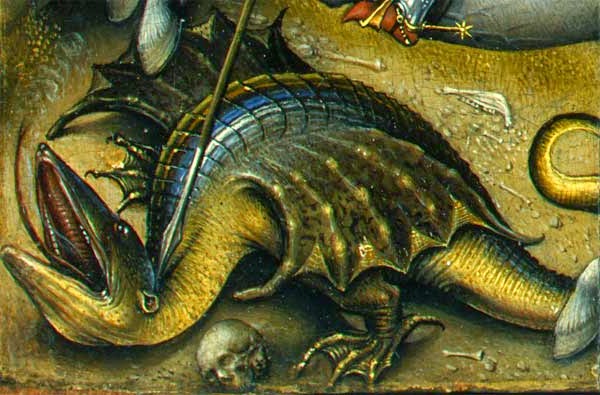 (By the way, how are ten horns arranged on seven heads?)