“When believing in Creation can seem like an easy option”


I used the title of this post as a heading when discussing the extraordinary adaptations shown by some organisms [1]. The examples I chose to illustrate this point were female bolas spiders and the larvae of black flies. Female bolas spiders use a sticky blob of silk on the end of a line that they use to drop on moths attracted to the smell that they produce, mimicking a pheromone produced by female moths. Silk is also used by blackly larvae, both for attachment and for building a cocoon in which pupation occurs. However, their remarkable feature is their head fans that are wonderful examples of precision engineering and which fold to allow the larva to remove tiny particles that have been trapped from currents of water.

These were just two examples from a huge number in Natural History where one’s sense of wonder forces the question “How did that evolve?”. Recently, a further example of extraordinary adaptations was reported. The Cinereous Mourner (Laniocera hypopyrra) is a grey bird that is relatively common in the northern Amazon rain forest (see below centre). The chick is quite different in appearance and has orange-red, spiky plumage, with white tips to each spike, that causes it to resemble poisonous caterpillars of similar size (of the genera Megalopyge or Podalia [2] - a Podalia larva is shown below left; a Laniocera chick, below right). 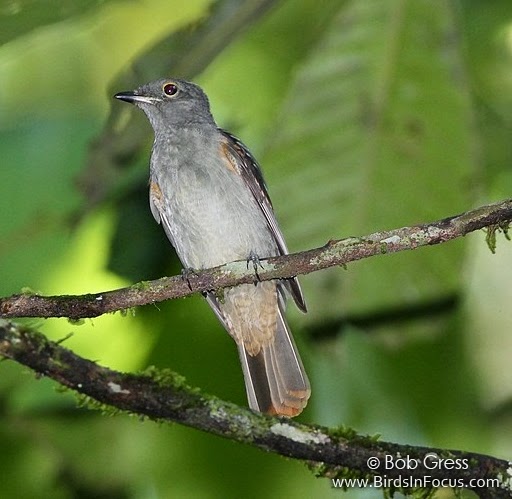 In their paper, to be published in The American Naturalist in January 2015 [2], Gustavo A. Londoño, Duván A. García and Manuel A. Sánchez Martínez suggest that, as the young chicks of this species are highly vulnerable to predation, mimicry of a poisonous caterpillar reduces the risk of attack. Chicks are slow-growing and do not beg for food like other nestlings, so their behavioural responses, as well as their appearance, are under genetic control. After about 16 days, the behaviour of the chicks changes, as they become more mobile and can avoid attackers. At this time the downy feathers begin to drop and the adult, grey plumage begins to emerge. The authors write:

The close match in size, morphology, and behavior between the nestling and the caterpillar supports the hypothesis of Batesian mimicry being used by the nestling, possibly to reduce nest predation. Therefore, nestling morphological and behavioral characteristics could have evolved as a result of the combination between the slow life-history nesting strategy observed in L. hypopyrra (e.g., long nestling period) and the high nest-predation pressures observed at the study site.

I agree, but how did this evolve and over what time period? Were there chance mutations that caused the changes of appearance and behaviour that coincidentally mimicked poisonous caterpillars of similar size? It must be so, although it is very difficult to see what the steps in the process might have been. Were there dramatic mutations, or a sequence of much smaller ones? If the latter, how were they selected if they conveyed only a tiny advantage at each step, or no advantage at all? There are so many questions, but no answers - only much speculation. Do you see what I mean when I say that believing in Creation can seem like an easy option?

[2] Gustavo A. Londoño, Duván A. García and Manuel A. Sánchez Martínez (2015) Morphological and Behavioral Evidence of Batesian Mimicry in Nestlings of a Lowland Amazonian Bird. The American Naturalist 185 [in press]

I would like to thank Bob Carling for alerting me to this remarkable story.