Slugs that glide, use “smoke screens” - and can swim


Few people like slugs. While I consider them to be pests for eating too many of our garden plants, I rather like the forms that live in water and, especially Aplysia, the “sea hare”. 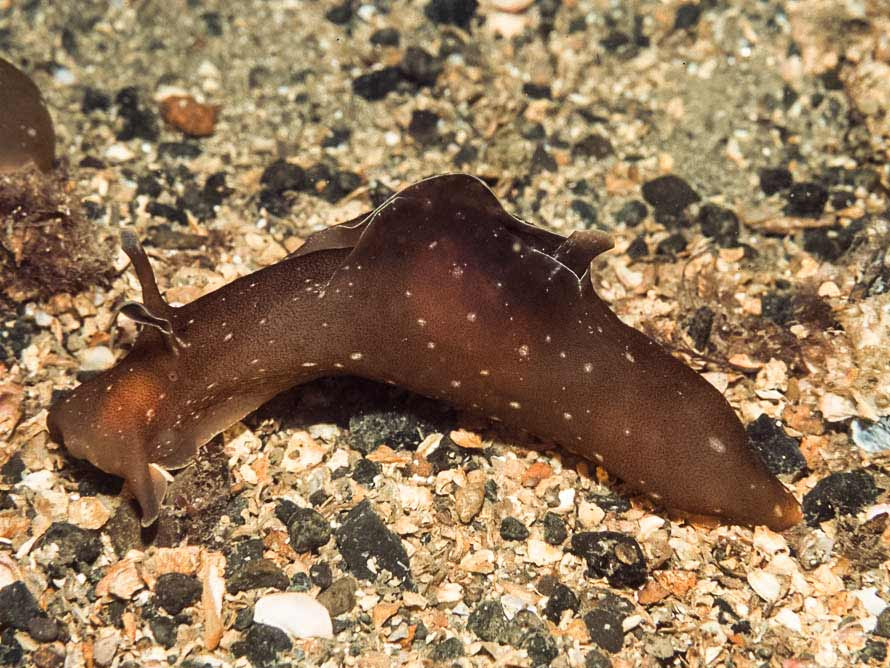 Philip Henry Gosse, the great Nineteenth Century Natural Historian and populariser, encouraged readers of his books to discover the animals of the coast and he wrote, in Tenby, 1 that specimens of Aplysia..

..crawled, or rather glided, along over the stones upon a fat fleshy disk or foot, and up the slender stems of Sea-weeds by bringing the edges of the same muscular foot to meet around the stem, grasping it thus, as if enclosed in a tube. The fore part, as the animal progressed, was poked forward as a narrow neck, furnished with two pairs of tentacles; one pair of which, standing erect, and being formed of thin laminae, bent round so as to bring the edges nearly into contact, looked like the long ears of a beast; whence this creature is called by the vulgar the Sea-hare (by naturalists, Aplysia punctata). On each side of the body, which is large and semi-oval, rises up a great fold of flesh (the mantle), which, arching over the back, is itself overlapped by its fellow on the opposite side. These wings are sometimes carried apart, exposing the back, and are said to be used as swimming fins; but this I cannot confirm from my own observation.

Nine years later, in A Year at the Shore, 2 Gosse is more dismissive about descriptions of swimming by Aplysia, writing:

It is reported that these mantle-lobes are capable of being used as swimming-fins, by their undulations; but I doubt the correctness of the observation.

As can be seen from the clip above, he was mistaken.

Another feature of this slug, described by Gosse, 1 is its ability to exude clouds of purple “fluid”:

Sometimes on being disturbed, and sometimes quite spontaneously, or at least without any visible cause, they would pour out from beneath the mantle-lobes a copious fluid of the richest purple hue, which stained the stones, the sands, and the water, of the same gorgeous tinge.. ..a few hours sufficed to remove all trace of it. 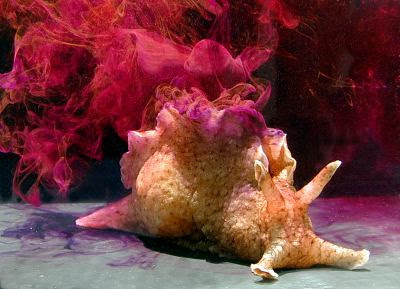 In both Tenby and A Year at the Shore, Gosse also describes the complex gut found in Aplysia, with chambers modified for holding food, milling it and then digesting the milled contents. He concludes the descriptions of the mollusc by saying:

..the whole organization affords us an instructive example of the Divine resources, and of the adaptation of organs to their requirements which an enlightened research is continually finding in Creation.

The sense of wonder is no less in those of us who consider that all the adaptations result from the selection of genetic mutations. Whether we believe in The Creation or in evolution, we can all agree that these slugs crawl by means of muscular waves passing over the foot; they can swim; they produce a dye to act as a diversion when disturbed; and they have a gut structure that is well adapted to their diet of strengthened seaweeds. The interesting question for an evolutionist is how did all these adaptations come about? What were the precursors, if precursors were present, or were there sudden mutations producing changes in the form and function we observe? It is easy to see how the gut structure enabled more efficient digestion of an abundant source of food, but how important was predation pressure in selecting for genetic changes that resulted in swimming and dye production? We do not know the answers, but pondering the possibilities is fascinating, although such thoughts would have been inconceivable to Gosse the Creationist.

I am an old-fashioned Zoologist, a Natural Historian, so looking at the wide diversity of animals and considering their adaptations and way of life comes as second nature to me. This approach, driven by a child-like curiosity, is now much less common in learned circles, as we move to a strongly anthropocentric and more “useful” Zoology. A contemporary student is unlikely to learn about the Natural History of Aplysia as described by Gosse, but be more familiar with the role the slug plays in applied research:

The marine mollusk Aplysia californica is an important animal for experiments in cellular, molecular and behavioral neuroscience because of the distinctive organization of its nervous system, which makes it appropriate for cellular analysis of a variety of behaviors, learning and memory. Aplysia presents a one-of-a-kind model for developmental and neurophysiological studies. 3

It is interesting that this quote is given under the title “Scientific Importance” and it represents a growing trend in using organisms as models. 4

I am sure that these investigations are of value but they say little about the animal in its natural environment and that is the main interest of a Natural Historian. It could be suggested that contemporary Biologists spend too much time dwelling on humans, and models for humans, without looking at the extraordinary natural world of which we are a part. That’s a bit preachy, but I’m sure that Henry Gosse would feel the same way. No doubt, critics of this view would suggest that I am looking backward, not forward, in suggesting that all organisms should be viewed in the context of their natural environment. However, we wreck environments in the cause of human advancement, and Modern Biology does little to address that issue. Rather, it encourages us to be concerned with all aspects of human health and wellbeing without being involved in the wider context of the health of the Earth. Is that wise?