Why Drosophila is so interesting


We had to choose four topics to study in the final year of my Zoology degree. I took classes in Entomology, Crop Protection, Limnology and Genetics and the first three represented my main interests at the time. Genetics was added because I thought it would be useful to know something of this developing branch of Biology. It was 1967, and a current student of Genetics would barely recognise the subject matter of our course. There was little on genomes and nothing on the techniques that are now commonplace in Molecular Genetics. Our practical classes involved, among other things, making crosses between fruit flies (Drosophila melanogaster) and then counting each of the resulting categories of eye colour etc. in the following week. Although this was fun, I found myself being as intrigued by the larvae and pupae that were in the growth medium as I was in the adult flies.

Fruit flies emerge from a puparium (see below), the hardened skin of the last larval stage, in which pupation and metamorphosis occur. This re-organisation always amazes me, in the way it allows such different life styles for the flying adult and the crawling larva. Indeed, the evolution of a pupal stage allowed for the selection of these quite different body types and the use of the last larval skin shows economy of materials, as no other outer covering is required. Interestingly, the puparium splits at the same place in all individuals to allow the adult fly to escape and that adds to my sense of amazement.

Fruit fly larvae are maggots (in colloquial language), and are remarkably similar in form to those of other, related, flies. We are all familiar with the maggots produced by house flies and blow flies and some will have come across the larvae of flesh flies (see below). Maggots crawl using muscle contractions along the body, aided by raised ridges that run transversely, and the contractions allow them to burrow through substrata. They are aided in their burrowing by being “pointed”, as this allows pressure to be exerted at the forward end of the animal, and they feed as they go, loosening the material in front. The larval head is much reduced and maggots tear at fruit or flesh using two mouth hooks that are extended and contracted, rasping away at whatever medium they are moving through. Food is broken up into a semi-liquid form that can be easily ingested, with saliva helping in this process. 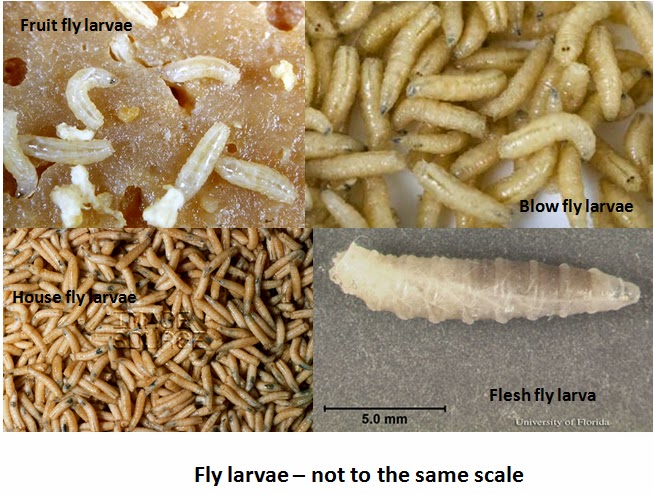 Although those enjoying coarse fishing have a fondness for maggots as bait, most people (even Creationists!) find them unpleasant. This aversion stems both from their movement and the locations favoured by egg-laying adults - we have all encountered blow fly maggots in our dustbins or seen them moving over the rotting flesh of dead animals. The latter are of value to Forensic Entomologists, who can provide accurate estimates of the time of death by looking at the age of maggots, and the succession of various species, but, even these larvae are not looked upon with much pleasure. However, they are excellent examples of a highly successful natural design and their resistant cuticle makes them difficult to kill, as anyone pouring pest-control chemicals on to a domestic infestation will agree. Perhaps more people will appreciate maggots when they realise just how effective they are in wound cleaning? All the life stages are excellent examples of the wondrous powers of evolution in the selection of genetic mutations.

That brings us back to Genetics and the use of Drosophila in research. The fruit fly has become a very popular “model organism” and it has been used to investigate many facets of gene expression, one of the most recent being in the genetics of intelligence. 1 Modern Biology is characterised by a deterministic approach based on knowing the genome of a small number of organisms, and trying to find out which gene, or combinations of genes, control which processes. Underlying this is the idea that humans share genes with other organisms so that we can gain insights into the working of humans as a result. Many Biologists have become so obsessed with the anthropocentric approach that they ignore the Natural History of organisms and that is a pity. We know that Drosophila larvae and pupae are fascinating in their design and evolution, but who would have thought that there are Drosophila larvae living as predators on other invertebrates in African streams? 2 One presumes that the ancient ancestors of these flies were living in fruit that fell into water and the resistant cuticle of the larvae, their rasping mouth hooks, and their crawling and burrowing ability were excellent pre-adaptations for becoming an aquatic predator. Now that’s really interesting, isn’t it?