The most well-known albatross is the fictional one that played a central role in Samuel Taylor Coleridge’s The Rime of the Ancient Mariner. 1 During a voyage in the Southern Ocean, the Mariner’s ship became surrounded by ice and four verses of the poem describe what happened next:

The Ice was here, the Ice was there,
The Ice was all around:
It crack’d and growl’d, and roar’d and howl’d -
Like noises of a swound.

At length did cross an Albatross,
Thorough the Fog it came;
And an it were a Christian Soul,
We hail’d it in God’s name.

The Marineres gave it biscuit-worms,
And round and round it flew:
The Ice did split with a Thunder-fit;
The Helmsman steer’d us thro’.

And a good south wind sprung up behind;
The Albatross did follow;
And every day, for food or play
Came to the Marinere’s hollo!

The albatross is seen to have supernatural powers and is interpreted as a religious symbol by Coleridge. Unfortunately, we then learn that the Mariner kills the albatross with a shot from a crossbow:

And I had done an hellish thing
And it would work ‘em woe:
For all averr’d, I had kill’d the Bird
That made the Breeze to blow.
The Mariner then had to wear the slain bird around his neck, while the ship was becalmed because the albatross, such a good indicator of winds, was no longer their guide. The crew faced increasing heat and the Mariner’s shipmates were killed by dehydration, but he survived and, when rains came, he was able to drink the fresh water. After the Mariner blessed the sight of many-coloured “water-snakes” that surrounded the ship, the albatross fell from his neck and he managed to get back to tell the tale.

There’s more in the poem, of course, but the albatross joins the Mariner as the main player in the drama. It is fitting that albatrosses are regarded as having supernatural powers as they fly efficiently and without apparent effort. They are also very large birds, with the six species of Giant Albatrosses (Diomedea spp.) being found throughout the Southern Oceans, where they complete long-distance flights, little seen by humans.

Albatrosses have long, narrow wings just like those found on glider aircraft. This high aspect ratio (we can refer to this as the length of the wing divided by its depth from front to back) means that lift is generated over most of the wing’s surface when it is fully extended. Lift is achieved by the wing profile that is convex above and less concave below; so air travels further over the upper surface than it does under the wing. This results in low pressure over the upper surface that “sucks” the wing, and thus the albatross, upwards, counterbalancing sinking resulting from the bird’s body mass. The same principle of generating lift applies to all birds using gliding flight but lift is also affected by the angle of the wing and by active flapping.  The advantages of the long, narrow wing of the albatross are clear when the dominant mode of locomotion is by gliding, but quite different attributes are needed for rapid take-off, when each cycle of flapping displaces air downwards and rearwards. Albatrosses taking off from the ground generate airspeed by running with their long wings flapping in a necessarily narrow arc. Takeoff, whether from land or sea, is often clumsy and sometimes requires a more than one attempt. Once the albatross is airborne, flapping flight is maintained for a short period before winds are used to allow gliding.

In the Southern Ocean haunts of the Giant Albatrosses there are near continuous strong winds and they are at their fastest at some distance above the ocean. Albatrosses can thus fly into the wind and generate lift before turning and gaining momentum as they fly down towards the sea surface, before once again turning into the wind. This is achieved without flapping and it allows energy-efficient flying over long distances. There is also a fascinating use of the winds that blow over the surface of the sea to create waves. Albatrosses fly parallel to the wave front using the upward deflection of the winds here to provide lift and, flying close to the water surface, they also use ground effect. This results from the pressure difference between the upper and lower surfaces of the wing and is pronounced at the wing tip where turbulent vortices result. In the picture below, an albatross is gliding close to the sea surface and, with the wing tips pointing downwards (anhedral), uses vortices projected to the water surface, resulting in enhanced lift and reduced drag. Albatrosses are not the only birds to use this method of flight enhancement; pelicans use it too and that is why the Boeing Corporation developed the Pelican aircraft concept, 2 using lift from the wing and also from the pronounced ground effect at the wing tip. The Boeing project is a theoretical extension of the Ekranoplan flying prototypes. 3 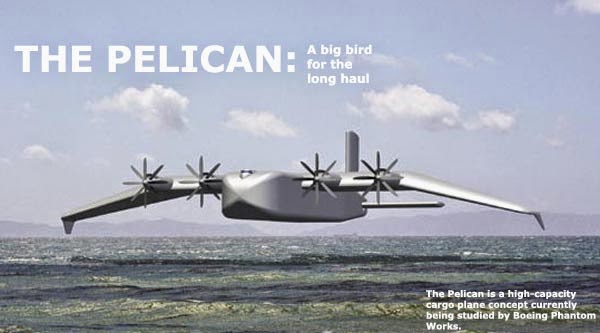 We thus come to designs made by humans using features that birds have had for millions of years. Creationists believe that birds are also designed, but Evolutionists suggest the selection of adaptations over time. For example, reptiles developed feathery coverings and these became modified into feathers of various forms, some of which clothed the fore limbs to produce the wing structure and covering. There are many other changes that allow birds to fly, but few can match Giant Albatrosses as masters of flight, even though they are challenged by takeoff. It’s no wonder that sailors like the Ancient Mariner, encountering albatrosses in the Southern Ocean, afforded them mythological status.

1 Samuel Taylor Coleridge (1798) The Rime of the Ancient Mariner in Lyrical Ballads, with a few Other Poems. London, J. & A. Arch.