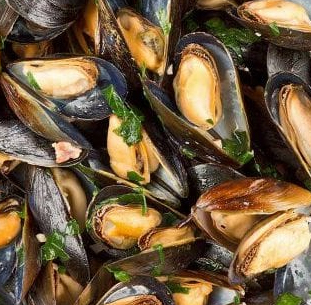 Moules marinières is one of my favourite seafood dishes and so simple to prepare. This is my version:
1. Wash recently-collected mussels under running water, clean off anything attached to the shell valves and also “beards” (called byssus threads by Biologists). Ensure that all mussels are closed tightly, or close when the shell valves are tapped with the blade of a knife.
2. Chop 3-4 shallots coarsely and sauté them in butter in a large pan until they are softened, but not coloured.
3. Add a half bottle of white wine (Muscadet works very well) and bring it to the boil. Add a little freshly-ground pepper and pour in the mussels, immediately covering the pan with a lid.
4. Turn down the heat and allow the mussels to cook for 5 minutes, shaking the pan from time to time. Pass the whole contents through a sieve, before returning the strained liquor to the pan and reducing vigorously. Keep the mussels warm.
5. Place 10-20 mussels in a deep dish and pour over some of the reduced liquor and garnish with chopped parsley. Use a shell valve as a spoon to eat the mussels and mop up the remaining juices with crusty white bread.
The rest of the white wine makes a fine accompaniment and a second bottle is usually needed if the meal is shared with others - and sometimes another bowl of mussels each, too. Fortunately, the blue mussel (Mytilus edulis) is very common on coasts and in shallow seas, and mussels are also farmed, so they are easily acquired.
Byssus threads ensure that these bivalves are attached firmly to the substratum, or to other mussels, and this provides anchorage to withstand the effect of waves and the tide when they are found in the intertidal zone. In this habitat they must also withstand exposure to the air twice a day, as this brings both the threat of drying and, during warm periods, of dangerous overheating. Drying is prevented by keeping the shell valves tightly closed by means of adductor muscles and the main one of these, the posterior adductor (A, in the photograph below), is kept contracted when the animals are not covered by water. They can keep this up for some time, as we know from looking at fishmongers’ slabs, and the mussels are thus living in their own little marine world and they can withstand quite high temperatures without harmful effects. Unfortunately, the temperature of boiling Muscadet means a quick denaturing of muscles and of proteins in other tissues, so the mussels gape open by the action of the hinge and we separate the valves (held together only by the hinge) to provide us with the spoon we use to eat the cooked animal. It is worth noting that the wonderful liquor we mop up with bread consists of wine, oil, shallots, pepper, parsley, sea water and mollusc waste products. 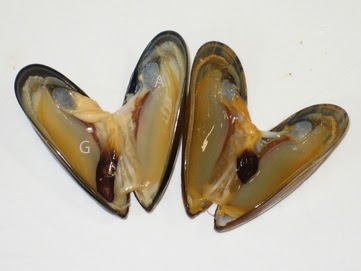 When living molluscs are covered by the sea, the adductor muscle is relaxed and the shell valves open by means of the elastic hinge. To grow, the mussels must feed and, perhaps surprisingly, the main organs of food capture are the gills, with two pairs on each side of the animal (visible as large translucent structures [G, in the photograph above]). The gills have many filaments and the surface of each gill is covered by millions of tiny hairs called cilia that beat with a power and recovery stroke. 1 Cilia are ubiquitous in the Animal Kingdom and serve many functions, but the millions on the mussel gill create a current that draws water into the cavity formed between the shell valves and the water then passes between the gill filaments. Particles trapped on the gills are moved by further cilia to a food groove on each gill and yet more cilia transport the food, by now wrapped in mucus, to extensions of the mouth (the labial palps), where potential food is sorted for ingestion, the remainder being “dropped” into the exhalant current.
The anatomy of a mussel shows the evolution of extraordinary structures: the byssus threads produced from a gland on the foot; the two shell valves; the adductor muscle; the elastic hinge opening the shell valves; the gills for respiration and for feeding; the labial palps for sorting. These, in addition to the evolution of the rest of the body, with its tissues, organs and organ systems, the whole having started out somewhere in very distant time as a single cell. How did all these structures, most of which are common to all bivalve molluscs, develop? Of course, I don’t think of that question when I kill mussels in boiling wine or when I eat them, satisfying myself that they are killed rapidly. The death of oysters and scallops is different. Oysters are usually chewed, or pressed against the palate, whilst still alive and living scallops are cut up to obtain the adductor muscle, 2 the commonest part that we eat. Although this is little different to the fate of these animals when attacked by a predator in natural conditions, there is something about humans eating live animals, or chopping them up while they are still alive, that makes me feel uncomfortable. Why is that? Is it because I have a sense of wonder at their extraordinary evolution and that they shouldn’t suffer this fate? I have never had a problem with dissecting live bivalves in practical classes for undergraduate students, although we were focussing on their fascinating biology. Did that overcome my apprehension?