Charles Waterton’s encounter with an orangutan


Charles Waterton, a popular Natural Historian in the Nineteenth Century, had no academic training in Zoology and wrote about his observations of the animals he saw around him wherever he travelled. Although regarded by Charles Darwin as “an amusing strange fellow” after a visit to Waterton’s stately home, Walton Hall, near Wakefield (when Squire Waterton “ran down and caught a leveret in a turnip field”), Darwin nevertheless had a high regard for the detail described in Waterton’s Essays on Natural History. 1

Waterton was a devout Roman Catholic, having been strongly influenced by the Jesuit teaching at his boarding school, Stonyhurst College.  He was a Creationist and recognised that humans are unique in their ability to be rational and in being able to use clothing, fire, manufacturing, etc. An excellent example of Waterton’s writing and approach comes in his observations on an orangutan; not in its native Borneo, but in London Zoo. He was on good terms with the Zoo Superintendent of the time and, in 1851, a keeper allowed Charles to enter the ape’s cage to become more closely acquainted. Only someone with the personality of Charles Waterton would have attempted such a thing, although David Attenborough’s contact with gorillas recorded in Life on Earth may be equivalent, although that was in the wild. Of course, Waterton recognised that he was meeting a captive ape and these are his observations: 2

As I approached the orang-outang, he met me about half way, and we soon entered into an examination of each other’s persons. Nothing struck me more forcibly than the uncommon softness of the inside of his hands. Those of a delicate lady, could not have shewn a finer texture. He took hold of my wrist and fingered the blue veins therein contained; whilst I myself was lost in admiration at the protuberance of his enormous mouth. He most obligingly let me open it, and thus, I had the best opportunity of examining his two fine rows of teeth. We then placed our hands around each other’s necks; and we kept them there awhile, as though we had really been excited by an impulse of fraternal affection.. ..This great ape from Borneo, exhibited a kind and gentle demeanour, and he appeared pleased with my familiarity. Having fully satisfied myself, how completely the natural propensities of a wild animal from the forest, may be mollified, and ultimately subdued by art, and by gentleness of the part of rational man, I took my leave of this interesting prisoner, scraping and bowing, with affected gravity as I retired from his apartment. 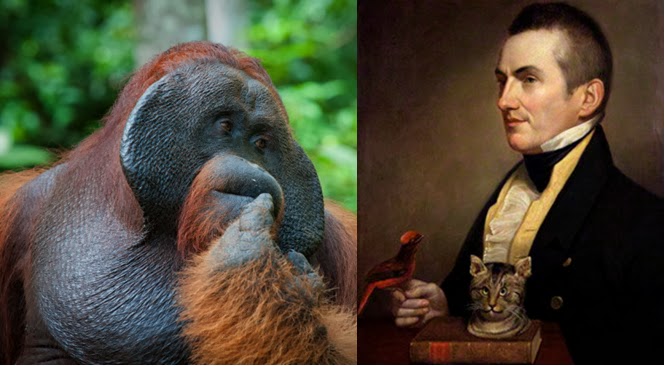 The writing suggests a meeting of two individuals with equal levels of curiosity. Charles Waterton is showing us that an orangutan almost has friendly human characteristics, yet he knows that this is unlikely to be the case. He was reminded of this fact shortly after he left the cage and the tone of his writing now changes: 2

..I was most egregiously deceived in the good opinion which I had entertained of him; for scarcely had I retired half a dozen paces from the late scene of action, when an affair occurred which beggars all description. In truth, I cannot describe it: I don’t know how to describe it: my pen refuses to describe it. I can only give an outline, and leave the rest to be imagined. This interesting son of Borneo, advanced with slow and solemn gravity to the bars of his prison, and took up a position exactly in front of the assembled spectators. The ground upon which he stood was dry; but immediately it became a pool of water, by no means from a pure source. Ladies blushed and hid their faces;- whilst gentleman laughed outright. I was scandalised beyond measure, at this manifest want of good breeding on the part of this shaggy gentleman from the forests of Borneo. He confirmed for ever, my early opinion, that, although apes naturally possess uncommon powers of mimicry;- and that these powers can be improved to a surprising degree, under the tutelary hand of man;- nevertheless, neither time, nor teaching, nor treatment, can ever raise apes even to the shadow of an equality with the intellect of rational man.

It is tempting to suggest that the second passage of description is a dashing of the warm anthropomorphic sentiments expressed in the first.

Humans are unique in needing explanations and there is no evidence that any other animal has this capacity, although we know that they can solve problems and create tools to aid their feeding. We also have strong evidence that many higher animals express emotion and young orang-utans, for example, appear to have temper tantrums when not allowed a treat from a keeper, and these seem identical to the tantrums thrown by a human infant when deprived of something they want. It is easy to project human emotions on to animals, just as Charles Waterton did with the “gentleman from Borneo” and this leads eventually to a sentimentalising of animals that can become absurd. As an example, just think of Babe (what a wonderful film that was, by the way - I was carried along with the sentiment just like everyone else).

We know that humans are unique among living things and yet we don’t always feel comfortable about that. Is that why we anthropomorphise and need to invent theistic explanations for things we do not understand?