Black (Périgord) and white truffles are prized by gourmets and high prices are paid for the best specimens collected. The truffle we eat is, of course, the underground fruiting body of a fungus and the bulk of the organism consists of the subterranean mycelium of hyphae (threads) that spread over the roots of trees, having a symbiotic relationship with the trees in these two types. The mycelium of most edible fungi spreads widely and enzymes produced by the fungus break down vegetable matter, transforming it into materials used in growth of fungal tissue. Above-ground fruiting bodies are the means of producing millions of spores that are then spread by wind, or animals, to ensure dispersal and the growth of new hyphae. The mycelium remains below ground, or hidden within decaying organic material, and it is the fruiting bodies - mushrooms - that most of us recognise.

One of the pleasures of autumn is to go mushroom collecting and then preparing various types in the collection by sautéing in very hot butter. Some are delicious to eat, some less so. I have always enjoyed collecting mushrooms, although not all members of my family join me in the feast that usually follows. I think they miss out, as the fruiting bodies of Parasols (Macrolepiota procera, left below), Field Mushrooms (Agaricus campestris, centre below) and Wood Blewits (Clitocybe nuda, right below), for example, are excellent. The hesitation comes from fear that my collections may contain some toxic types, as there are several mushrooms that are lethal to humans and I am, after all, an amateur collector.

The most notorious mushroom is the Death Cap (Amanita phalloides, left below) that causes very unpleasant symptoms of nausea, vomiting and much else, followed by a partial recovery and then terminal damage to the liver, with death resulting in three to twelve days. Two other species of Amanita are also deadly - the Panther Cap (A. pantherina, centre below) and the wonderfully-named Destroying Angel (A. virosa, right below) - and these both contain similar lethal compounds (amanitoxins and phallotoxins) to the Death Cap, to which they are closely related. 1 There are many other poisonous fungi, some of which are lethal and others producing symptoms that are merely unpleasant. Some of the compounds they contain may produce effects when mixed, for example, with alcohol and yet others are destroyed by cooking (but, unfortunately, that is not the case with the toxins produced by the deadly Amanita spp.). 2

Hallucinogenic compounds are found in the Fly Agaric (Amanita muscaria, left below) and in several species of Psilocybe, known colloquially as “magic mushrooms” or “shrooms” (right below). Muscimol from A. muscaria induces mild hallucinations, but the toxins in these mushrooms also cause unpleasant effects. This has led to the legendary practice of drinking urine from humans and other animals that have been eating Fly Agaric mushrooms as a way of getting the “high” without the nasty side effects. 3 Psilocybe spp. have been used in many countries as a part of religious ceremonies and the hallucinogenic chemical psilocybin has certainly been important in youth culture and is used as a recreational drug of choice by some people. 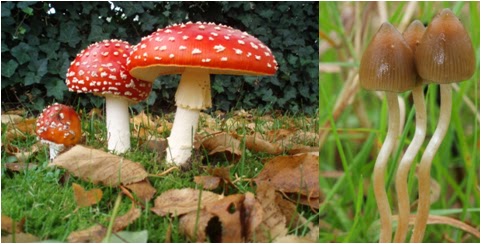 I will not dwell further on these effects, but instead pose a question - why do some mushrooms contain deadly poisons for humans, or compounds that give us hallucinations, while we know that others are delicious? To answer the last part of the question first, our knowledge of all foods comes from trial and error. Our distant ancestors tried all manner of mushrooms and selected those that are best to eat, as well as discovering those that are poisonous. The ingenuity of early collectors shows in their searching for buried fungi such as truffles, as well as the more obvious fruiting bodies. The first part of the question is more difficult to answer.

To a Creationist, the poisons, or hallucinogens, were devised by God and must have some purpose, although it is difficult to know what that is. There are no references to fungi in the King James’ Bible, so this part of Creation is something made for a purpose by a Supreme Intelligence and we must just accept that. As Philip Henry Gosse, the avid Creationist, wrote, “...the praise of the all-glorious God lies latent in all his creatures, whether man educe it or not.” 4 To an Evolutionist, the likely explanation is that the chemical compounds resulted from changes in metabolic processes and the toxins were a by-product of these changes. While they may have some deterrent effect on grazing animals, the lethal, or hallucinogenic, effects on humans are coincidental.

Whether mushrooms are considered valuable, or threatening, is affected by cultural attitudes and these vary in different parts of the World. Have you noticed how many mushrooms growing alongside paths are kicked over in countries where mushroom collecting is not popular? Is that because the kicker feels that the mushrooms are a threat, or is it just fun to destroy them? If mushrooms are considered threatening, their reputation was not enhanced by the images of the mushroom clouds resulting from explosions of nuclear bombs. Certainly, those who lived through the 1950s and 1960s are only too familiar with the hideous threat provided by those images. Yet, whatever our views, we must recognise that fungi of all sorts are essential in breaking down plant and animal material and transforming it into usable energy. We must also remember that the fruiting bodies are only part of the whole. And that raises another question for Evolutionists. How did the fruiting body develop from a mass of hyphae? 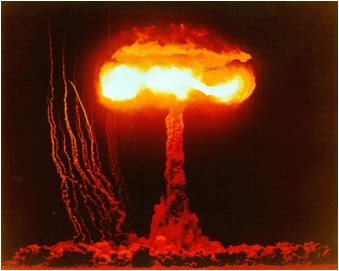