Sea anemones are primitive animals that capture their food using tentacles. Many of us are familiar with beadlet anemones of the sea shore that retract when the tide goes out and then look like red, slimy blobs. When viewed in an aquarium, or rock pool, the tentacles extend and the anemones appear quite different - and some find them attractive. 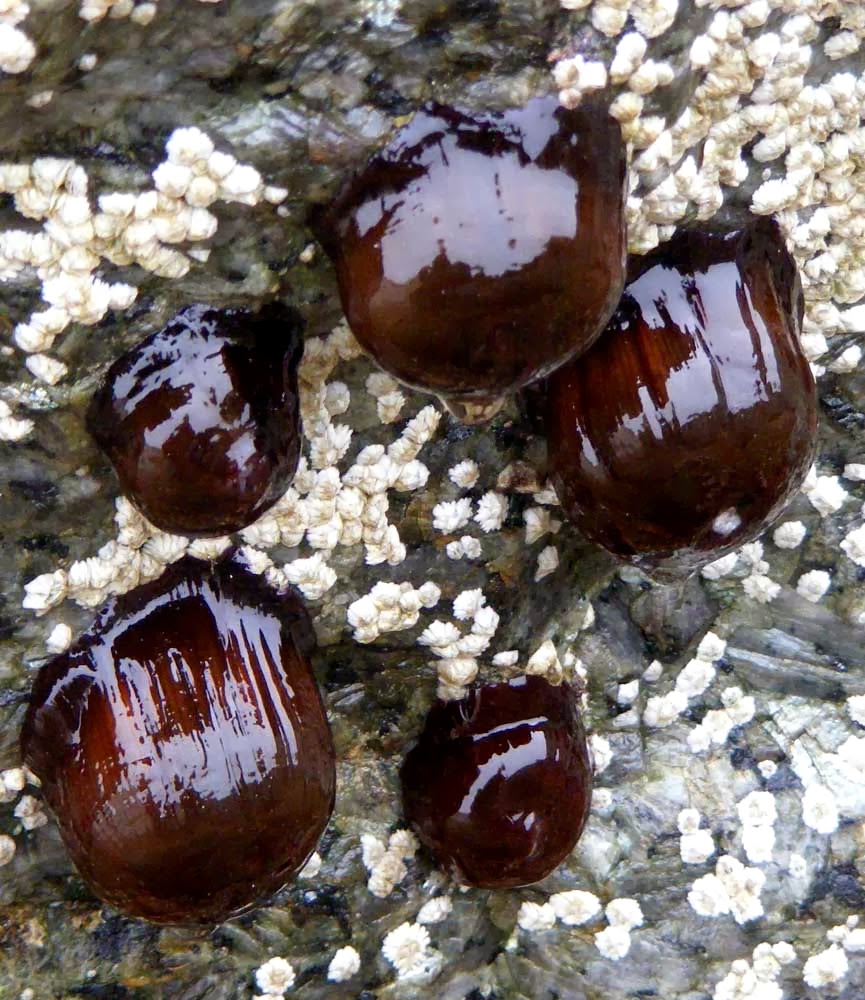 Philip Henry Gosse was an expert on sea anemones and he published Actinologia Britannica 1 in 1860, giving a description of the wide range of species found around the coasts of Great Britain. One of the anemones he described was Edwardsia carnea [the name was changed to Edwardsiella carnea in the 1880s], of which he made the first description in 1856. 2 It is an unusual sea anemone that often lives in cavities in rocks and Gosse gave it the common name of The Crimson Pufflet. This is what Gosse wrote about a population he found in a sea cave in South Devon: 1

The roof and sides of this cave are studded with the pretty little Crimson Pufflet.. ..The tide having receded, they are readily discovered by their crimson columns projecting an eighth of an inch from the dark floccose rock. The limestone is much eroded by Saxicavae [burrowing bivalves]; and it is in the old burrows of these Mollusca that the Edwardsia dwells..

As Gosse was such a talented artist, he provides us with an illustration of what he saw as part of a larger picture and this is reproduced below. We know then, that this species lives in burrows created by other animals, but Gosse also describes them as having a covering of mucus, dead cells, diatoms and other matter to form an “epidermic tube” in which the sea anemone lives (see the magnified diagram of the two specimens also given below). 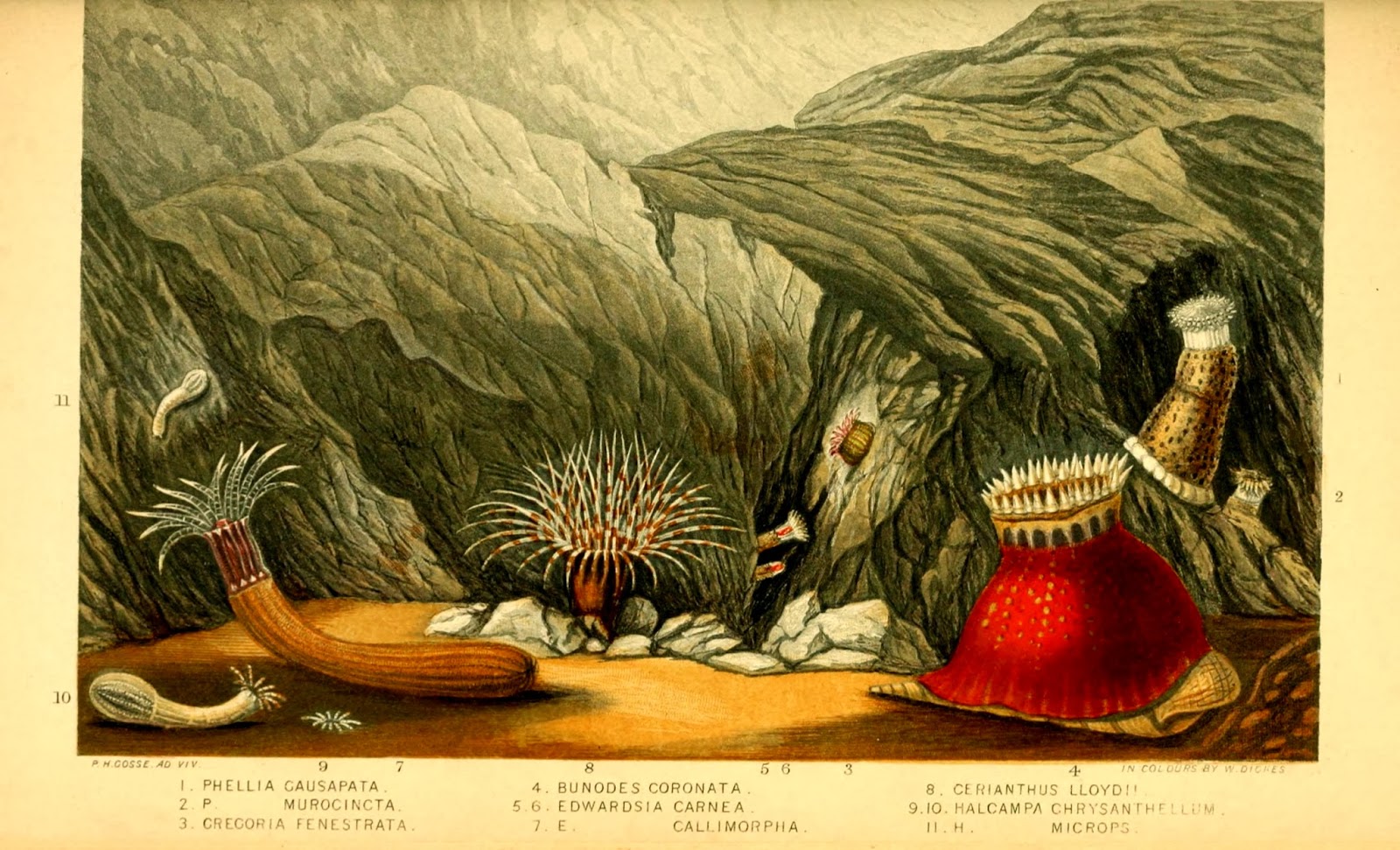 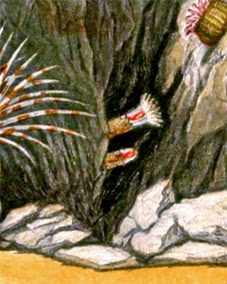 Species of Edwardsiella are found widely, but the most astonishing habit is that reported from the newly-described Edwardsiella andrillae. These translucent sea anemones live buried under Antarctic ice and this new species was first described in a research paper by Marymegan Daly, Frank Rack and Robert Zook that was published in PLOS ONE in December 2013. 3 Their paper mentions E. carnea (Gosse 1856), demonstrating that the great Naturalist’s work is still of value today. 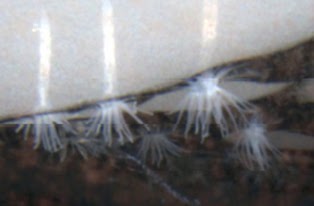 Daly et al. were not searching for this new sea anemone; coming across it after using a hot water drill to penetrate through the Ross Ice Shelf to allow a submersible with imaging equipment to be deployed. They wrote:

This provided an unexpected and astonishing glimpse into this subsurface world, discovering an unusual and likely unique marine biological community dominated by anemones living inside burrows in the lower surface of the ice shelf.

The anemones will be feeding on passing small animals carried by currents under the ice, but the questions remain of how they arrived there and how they manage to burrow into the ice. As all other species of Edwardsiella are found around coasts, the first question provides a puzzle, but that may be because the oceans are so little explored and there is much yet to be discovered. As to the burrowing, we know that Edwardsiella characteristically uses a burrow and it is conceivable that they can erode the surface of the ice by movements of the body, but that, too, must remain a mystery for now. However, the production of a mucus envelope will protect the body from freezing, especially as the mucus contains polysaccharides, likely to have some “anti-freeze” characteristics.

The discovery of E. andrillae, and its location, amazes me and I’m sure that Henry Gosse would have been fascinated and excited, having written about life on snow (and with chapters on “The Unknown” and “The Great Unknown”) in The Romance of Natural History. 4 He would have been very keen to find out more, but would not be faced with the question of how E. andrillae came to inhabit the underside of ice sheets. As a profound Creationist he would find this another amazing example of God’s design and would marvel at it for that reason.

For those of us that believe in evolution, however, many questions remain as a result of the fascinating discovery of this new sea anemone. Evolution is like that: it fills one with wonder and an eagerness for answers that are difficult to obtain.

I would like to thank Matt Coors for alerting me to the remarkable story of Edwardsiella andrillae by posting a news story on Facebook.