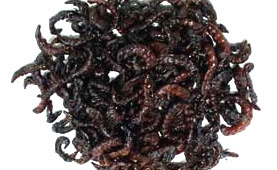 I was introduced to zazamushi (above) on a visit to Japan, and found them delicious. Zazamushi are caddisfly larvae (usually Stenophylax marmorata) that live in fast-flowing rivers, where they feed on material caught in their secreted silk nets [1]. Larvae are collected from the surface of rocks and then cooked by frying in soy and mirin before being served, or canned for sale in stores. I brought some back to the UK for friends to try and most liked them. 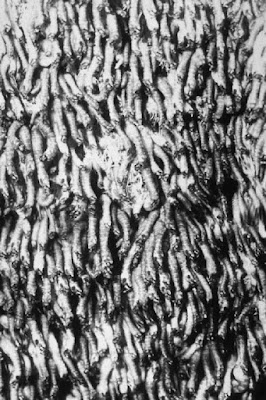 For some years, I worked on blackfly larvae that coat sluices in enormous numbers (see above) - 1 million per square meter having been recorded [2], although the larvae are small, varying in length from 0.2 - 0.9 cm, depending on their age. They form a monoculture of one species, Simulium noelleri, and could easily be harvested and eaten. However, I was not tempted to eat any of the animals I was studying, unlike Henry Gosse who experimented with cooking a few of the sea anemones he was working on [3].

Part of my reticence came from a report from Dr Rory Post who had eaten blackly larvae during his research on the insects [4]:

I decided that my own understanding of this group might be advanced if I tasted a few larvae. Selecting S. nitidifrons from a nice, clean mountain stream in the Lake District I popped the tasty morsels into my mouth and awaited enlightenment. All that came however was a certain loosening of the bowels. Was this coincidence? The effect wore off within a day, and the experiment was repeated, with similar effects. Determination of whether the effect is caused by the larvae themselves or their own gut contents awaits further experimentation. 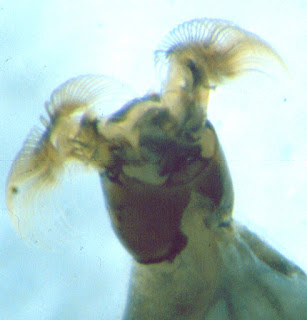 We are not given comments as to taste, but Dr Post raises an important point when it comes to the gut contents, as these reflect the whole range of small particles suspended in the water column of the river, including mineral particles, detritus, and many bacteria that may be pathogenic. Blackly larvae, unlike net-spinning caddisfly larvae, do not select what they ingest and anything that collects on the feeding head fans (see above) is ingested. This makes for a poor quality diet and much of the total body mass of a blackfly larva is made up of the gut and gut contents, with their feeding being near continuous. If they were to be prepared for human consumption, each (of the thousands required for a meal) would have to be deveined as one would do a prawn (shown in the video below)? Perhaps the answer is to collect larvae in huge numbers and then allow them to feed in channels supplied with finely-chopped herbs or something similar?

Although they are easy to collect, blackfly larvae are small and there are clearly problems with their gut contents. Most aquatic insect larvae are much more difficult to collect than blackfly larvae and zazamushi, but adults of some groups that emerge from water in swarms are collected easily and are already utilised. Adult female flies often contain fat reserves for the maturation of eggs and there is little problem with gut contents since adults of both sexes feed on plant sugars to give energy for flight, should this be needed. In addition to nectar, the female adults of biting flies, like mosquitoes and blackflies also require a blood meal (although some of the latter obtain enough food reserves as larvae to not need to do so – S. noelleri  on "my" sluice being one example). This may be a useful addition in terms of food value.

..periodically swarm in immense numbers along the shores and islands of Lake Victoria. The insects are harvested, sun-dried, and ground into a flour for subsequent use. The insect cake is prepared by mixing the flour with water and allowing the mixture to sun dry.. ..the analysis of the insect flour revealed a high protein and low fat content.. ..The high crude fibre content was a result of the chitin found in insects [i.e. their skeletal components].. ..It can be noted that the flour was an excellent source of niacin [Vitamin B3], thiamine [Vitamin B1] and riboflavin [Vitamin B2].

Bergeron and colleagues [5] conclude their article by stating:

The results of this research demonstrate that aquatic insects which can be harvested in large quantities, dried, and made into a flour have the potential to furnish substantial amounts of high quality protein, vitamins and minerals to the diet..

There is clearly a huge potential in rearing both larvae and adult aquatic insects more widely as food. Are there any entrepreneurs out there willing to give it a try?