As a child, I attended the local Baptist Church and also went to their Sunday School. I listened to many sermons and stories and I remember that one figure from The Bible was mentioned repeatedly in a negative light. This was Thomas, always given the prefix "Doubting", and he clearly represented something that we should not do – we were told that his doubting meant that he had a weak faith in Jesus and the Resurrection. As Sunday School teachers and Baptist Ministers were important figures to me at the time, I went along with this and tried not to be a doubter myself.

Thomas gains his reputation from a passage in The Holy Bible [1]:

But Thomas, one of the twelve, called Didymus, was not with them when Jesus came. The other disciples therefore said unto him, We have seen the Lord. But he said unto them, Except I shall see in his hands the print of the nails, and put my finger into the print of the nails, and thrust my hand into his side, I will not believe. And after eight days again his disciples were within, and Thomas with them: then came Jesus, the doors being shut, and stood in the midst, and said, Peace be unto you. Then saith he to Thomas, Reach hither thy finger, and behold my hands; and reach hither thy hand and thrust it into my side: and be not faithless, but believing. And Thomas answered and said unto him, My Lord and my God. Jesus saith unto him, Thomas, because thou hast seen me, thou hast believed: blessed are they that have not seen, and yet have believed.

So Thomas was cautious and wanted reassurance that events had taken place, something that received a mild rebuke from Jesus, who implied that belief was enough, without the need for evidence. It's a scene that has been reinforced in many religious paintings over the centuries (a selection being given below to convey the emotional flavour). 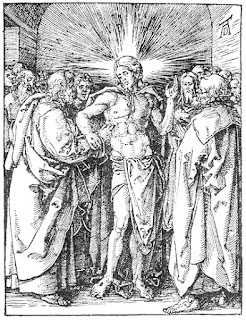 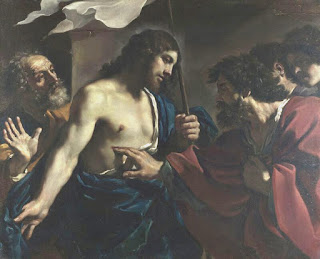 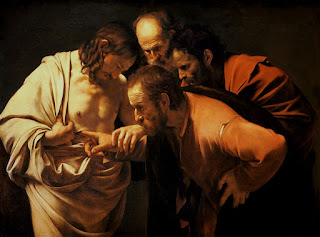 The story of Thomas, and the way it was interpreted, was only part of my growing doubts about the Christian religion and I found it impossible to accept everything that was presented to me. Perhaps this was because, even as a child, I was a committed Natural Historian and asked myself questions about animals and plants that I saw and needed to find answers - but there are many Natural Historians who have an unquestioning faith in Christianity. There is no better example than Philip Henry Gosse FRS (1810-1888), for whom all of Nature was evidence of the power of God. 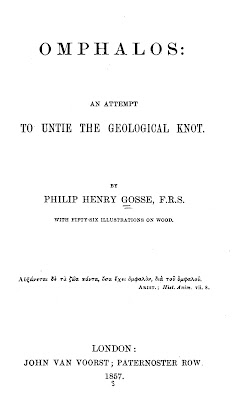 Henry Gosse was so disturbed by ideas on evolution that were circulating in the mid Nineteenth Century that, in 1857, he published Omphalos as a means of resolving differences between the time scales of Lyell's Geology  and those of the Biblical account. In Omphalos, Gosse put forward his idea that Creation occurred a few thousand years ago and that all rock strata and fossils, that Gosse knew must be many millions of years old, came into existence at the same time. He coined the term prochronic for this phenomenon. Predictably, his ideas were dismissed both by scientists and by Christians, dismayed at the thought that God was playing tricks with us. As David Knight remarked in Science and Spirituality [2], the result was that:

Gosse's explosive Omphalos, contrary to his intentions, made the literal reading of Genesis impossible for thoughtful people..

All this stemmed from Gosse's unshakeable faith in the literal truth of The Bible. In an Appendix to The Naturalist of the Sea-Shore [3], Henry Gosse's second wife, Eliza, wrote this:

He studied the Bible as he would study a science. He must know what each separate portion was about, who the inspired writer was, what he was wishing to say, and for what purpose it was written; also how it was connected by prophecy or quotation with the New Testament, either in the Gospels or in the Epistles. He was microscopic in his readings, and in his interpretations of the Word of God, for he most implicitly believed every word of the original languages to be Divine, and dictated and written, through the writers, by the Holy Ghost. These languages, through their antiquity, are necessarily obscure; thus he was content to leave many passages and even chapters unexplained, satisfied that they never contradicted each other.

This description is telling as Henry clearly wanted to know as much as possible about all the Bible had to tell and had the same sense of enquiry that he used in science. However, the sections that could not be explained were accepted as being divinely inspired and that was a matter of faith.  What would Henry have thought of Doubting Thomas, someone who sought evidence? His view was probably similar to that of my Sunday School teachers, with Thomas perceived as questioning the basis of faith rather than seeking reassurance about a very significant event.

Henry Gosse led his own small Christian group that met in a chapel near his home in Torquay and this encouraged his insularity. He was not only the leader, but also gave the regular sermons and his congregation looked up to him and took on board all that he said. Henry's isolation meant that he received few challenges from those with whom he could debate, but he did have a Doubting Thomas in his own family - his son Edmund - and the breakdown of their relationship was deeply hurtful to both of them. It was documented in Father and Son [4] and is a sad story. Henry was a fascinating and warm man, with a wonderful ability to communicate his deep interest in Natural History. However, his attachment to his own religious principles caused not only a split with scientific and religious communities but also with his own son, for whom he cared deeply.

Henry might have done what was right for Henry but, as David Knight points out, he damaged other people's ability to access the very things that he believed in.

[2] Eliza Gosse (1896) in Edmund Gosse The Naturalist of the Sea-Shore: the Life of Philip Henry Gosse. London, William Heinemann.