While watching a television programme that visited the Cheltenham Masonic Hall, I noticed that there was a banner hanging by the staircase that showed strange winged creatures. As a student of such things [1], I was intrigued and Ray Pearson and one of his colleagues kindly supplied me with a photograph (below, upper). 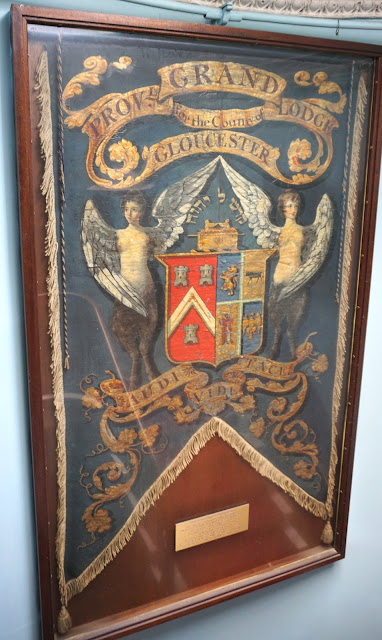 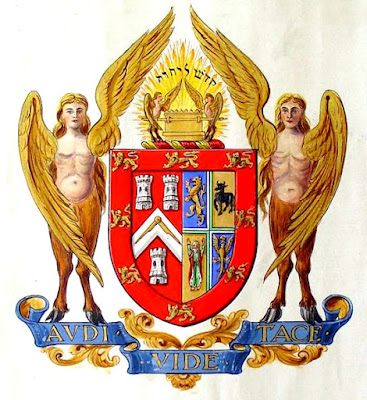 The banner features a version of the Arms of the United Grand Lodge of England (seen above, lower) and is slightly modified to include reference to the Provincial Grand Lodge of Gloucestershire. This is the description of the Crest and Supporters of the Arms given in a translation from the heraldic language [2]:

The Crest consists of a golden ark supported by two cherubs. These have the upper part of the body in natural flesh tints and the lower half covered in brown fur, their wings are in gold and above them, in Hebrew, is the Motto "Holiness to the Lord".. ..The Supporters are two cherubs coloured similarly to the pair on the Crest.

The golden ark is the Ark of the Covenant, containing the two stone tablets on which are written The Ten Commandments and each cherub covers the lid, or mercy seat, with one outstretched wing, a motif repeated in the Supporters.

There are many descriptions of cherubim (or cherubs, the terms being used interchangeably) in The Holy Bible [3] and several quotes are important for our understanding of their appearance:

The "cherub" in the quote above has been interpreted by some Christians as being an ox [4], although the reasons for this are not given. If we substitute the term facets for faces, we can see that cherubim are composed of four creatures and this is how they appear in the Masonic illustration, with the lion's mane being represented by long hair. Interestingly, the Cheltenham cherubim are androgynous, appear to have breasts, and their hair (mane) is worn up. Why? Perhaps the artist was influenced by images of French sphinxes (see below)? 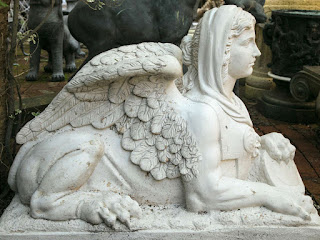 We thus know that the wings of cherubim are 50% of their height and clearly some licence is allowed when portraying the creatures. It is noticeable that the arms are replaced by wings, just as in birds, but quite different to conventional portrayals of angels, for example. However, cherubim do have hands as we learn in another passage in The Holy Bible [3]

What else do we know about cherubim? Within Roman Catholicism, the writings of Pseudo-Dionysius the Areopagite (not to be confused with Dionysius the Areopagite) have held sway since mediaeval times and still do today. For Pseudo-Dionysius, cherubim were the second highest rank of heavenly beings, with only Seraphim holding a more important role. There were then various other groups, with Archangels and Angels forming the lowest grouping and only these forms being able to leave Heaven and communicate with humans on Earth [1].

Religious paintings show cherubim, sometimes with long wings and sometimes with very short wings, and the bodies of babies – what we recognise colloquially as cherubs. Whereas the Masonic view of cherubim has a basis in Biblical text, the portrayals in many paintings, and in sculpture, seem the product of imagination, just as the close relatives of cherubim, the putti, clearly are. Putti have no connection with Heaven and were associated with human pleasure and temptation in Renaissance Art. Perhaps they were originally cherubim that had been cast from Heaven because of some naughtiness?