There are two common types of sloth – the three-toed (below) and the two-toed – living in Central and South American forests. Three-toed sloths do not move around as widely as their distant relatives [1] and they usually have a greenish colouration. This was described by Charles Waterton in his pioneering observations of sloths in their natural environment made at the beginning of the Nineteenth Century [2]:

I observed, when he was climbing, he never used his arms both together, but first one and then the other, and so on alternately.. ..His fur has so much the hue of the moss which grows on the branches of the trees, that it is very difficult to make him out when he is at rest. 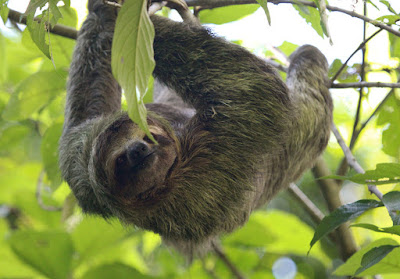 If Waterton had a microscope, he would have observed that the green colouration resulted from algae growing over the surface of the hairs making up the coat; hairs of the three-toed sloth having [3]:

..irregular transverse cracks that increase in number and size with age. A wide variety of organisms have been reported to occur in the grooves and cracks of sloth hair.. ..the greenish color of the hair.. ..is due to green algae, which in most cases have been identified as Trichophilus welckeri.. ..The hair of the three-toed sloth absorbs water like a sponge, perhaps making it an even more ideal habitat for algae, and prompting speculations that the sloth perhaps receives nutrients from the alga via diffusion along the spongy outer portion of the hairs, followed by absorption into the skin. The algae growing on sloth hair may also produce exopolymeric substances that may give the hair a desired texture or allow beneficial bacteria to grow.

This is speculation, but we know that exopolymers are ubiquitous and have many important roles to play, both for the organisms that exude them and in the wider environment [4]. It is likely that they are a significant part of the sloth fur ecosystem.

Algae are not found abundantly in the fur of very young sloths and they are probably acquired during close contact with the mother [3]. It has been suggested that the relationship of Trichophilus welckeri with the sloth is mutualisitic [3]; the alga gaining nutrients that are released by the microbial community on the hairs and also befitting from being carried up into the canopy where light is more available for photosynthesis. The sloth grazes this good quality food resource (it is rich in lipids [1]) during grooming and it also benefits from the green colouration that the algae convey to the fur, acting, as Waterton pointed out, as a form of camouflage.

Renowned as slow movers, sloths have a very low metabolic rate that enables them to survive on a poor-quality diet, but considerable energy is expended in climbing down to the ground to defecate and in climbing back up to the canopy, with the sloth made heavier by the water retained in the fur. Three-toed sloths defecate on the ground in scrapes that they prepare with their hind claws, while clinging to vines or other trailing vegetation with their fore limbs. The mass of faecal pellets is then covered with leaves and the sloths begin their steady climb back to the canopy [5]. The sloths are vulnerable when on, or close to, the ground and the greatest mortality of sloths occurs during this activity. As the diet is poor and the rate of metabolism low, visits to defecate are approximately weekly, but why has the three-toed sloth evolved this habit, when two-toed sloths defecate from the canopy? The advantage to the sloth may be that egesta provide a fertiliser for their preferred trees (each three-toed sloth not moving far from a few favoured trees); the possibility of using the latrine as a form of marking or communication; and the opposite effect of hiding odours from predators that may hunt from the ground and be more mobile than the sloths [1]. 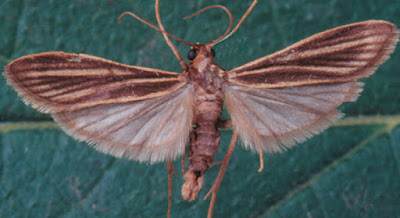 So far we have seen an association between algae, micro-organisms and sloths, but the fur also harbours several types of invertebrates, one of which is found only on sloths and has a remarkable life cycle adapted to the behaviour of its host. This is the moth Cryptoses cholopei (above). Gravid females collected from sloths laid their eggs on any solid surface but the larvae that hatched did not feed on sloth hair, or on leaves, but only on sloth dung [5]. During sloth defecation, female moths descend to the faecal mass to lay their eggs and larvae emerge to feed exclusively on the faecal pellets. They do so within silk tubes [5] that bind pellets and which also form a cocoon for pupation. Adult moths then emerge to fly up into the canopy and locate a three-toed sloth and complete the life-cycle. Cryptoses gains from the relationship through:

The second explanation may not be completely true, as jays have been seen feeding on the fur of sloths [6], but there are a wide variety of other invertebrate colonists that may provide food for the birds. Indeed, the ecosystem within the fur of the three-toed sloth is a complex one, consisting of algae, micro-organisms and protozoans, a wide range of invertebrates and the exudates of the sloth and of all the other members of the community. Among the micro-organisms are fungi that digest detritus, including dead moths, and which, in turn, release nitrogen-rich nutrients that can be utilised in growth by bacteria and algae. The fungal community is diverse [7] and some of the fungi living in sloth fur produce antibiotics that may affect the rest of the community living there. As Higginbotham and colleagues write [7]:

The high abundance and diversity of fungi associated with sloth hair, coupled with their bioactivity, may speak to a biological importance to sloths that is yet unexplored.

As if watching sloths is not wonderful enough, their exobiology presents an extraordinary story. How fascinated Charles Waterton would have been if the sloth fur ecosystem had been known to him. Isn't Natural History amazing? Just think of how much more we have yet to learn about the world around us.