Do souls have wings?

Breathing is the most obvious sign of life, and when a man ceases to breathe we know he is dead. So from breath the word psyche came to mean life, then the principle of life, and then the soul or again the mind. It is interesting to observe that in other ancient languages, as for instance Hebrew and Latin, the word for soul or life has gone through exactly the same history, being gradually changed from its original meaning of breath. A part of the story of this word is told for us in the Bible where we read in the book of Genesis 'And the Lord God formed man of the dust of the ground, and breathed into his nostrils the breath of life, and man became a living soul'.

As people acquired a soul by being alive, followers of the Judaeo-Christian tradition believe(d) that the soul left the body when breathing stopped at the time of death. There are references to this in the Bible [2]:

But God will redeem my soul from the power of the grave.. (Psalm 49 verse 15)

For thou hast delivered my soul from death.. (Psalm 56 verse 13)

The soul, being a component of each individual, was regarded as a record of a person's life, and it was this on which we are judged, going either to Heaven or to Hell, as the following reference in the Bible implies [2]:

And these shall go away into everlasting punishment: but the righteous into life eternal (Matthew 25 verse 46)

The concept of the soul has become elaborated in Christianity by the addition of doctrine. For example, Catholics believe that a state of purgatory exists, where souls eventually destined for Heaven undergo a period of purification in readiness for entry. The question then arises of how are souls to be illustrated in religious art works, such an essential part of the decoration of churches and other places of worship, especially in the Catholic tradition? 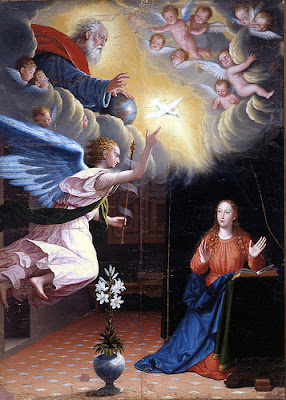 I was reminded of this question during a recent visit to Granada. Although the magnificent Alhambra, with its fine examples of Islamic architecture and decoration, was one of the main attractions, I was drawn to a painting by Juan Sánchez Cotán in the Museum of Fine Arts in the Palacio de Carlos V and also some reconstructed wall paintings by unknown artists in the 16th Century Convent of Santa Paula (now part of the Palacio Santa Paula Hotel). Cotán became a monk and his religious paintings were completed for his monastery, the one that had caught my eye was of the Annunciation (above), completed at the beginning of the seventeenth century. The key figures are God, The Virgin, The Holy Spirit (in the conventional form of a dove) and the Archangel Gabriel (clearly with bird wings, although their attachment is hidden). In Heaven there are winged cherubim (although there is no record in the Bible of them looking like babies, and the wings of cherubim must be large [cf. 3]), and some winged heads, others being seen to the left, in the cloud below God. I take these to be souls rather than parts of cherubim and those in the cloud may be in purgatory and waiting their opportunity to enter Heaven. It is possible that they are cherubim that have had their modesty protected by not appearing naked, but it will be noted that the winged heads (souls) have their wings located at the front, while the cherubim have theirs on the back, as is conventional in the portrayal of all types of angels. 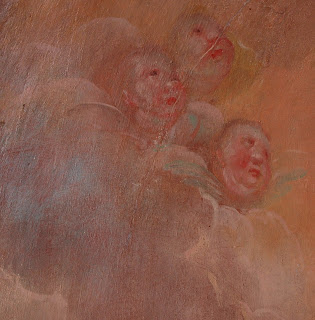 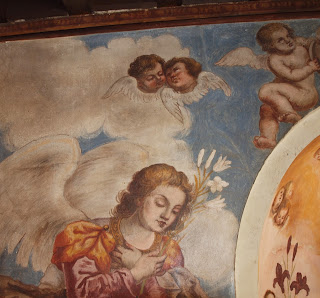 Not all the winged heads in the Santa Paula Convent wall paintings have the attractive appearance of babies seen in other paintings (a selection is shown above), but the motif is the same. It is probably of long standing as in The Story of a Soul: The Autobiography of St. Thérèse of Lisieux, we read [4]:

When I recall these days of my noviciate I understand how far I was from perfection, and the memory of certain things makes me laugh. How good God has been, to have trained my soul and given it wings.

The language may well be figurative rather than literal, but St. Thérèse is a very influential figure in Catholicism and her description conveys meaning to the images of winged souls seen in paintings of earlier eras. If they are not winged souls what do they represent? Why paint whole cherubim and, additionally, just their heads, but with a rather different point of attachment for the wings? It remains a mystery and, together with the conventional form of winged angels seen in paintings and sculpture, something that stimulates the imagination of the beholder.

[3] Exodus 25 verse 20 and Exodus 37 verse 9 in the Authorised King James version of the Holy Bible (accessed through https://www.biblegateway.com/)

[4] Chapter 9 in The Story of a Soul: The Autobiography of St. Thérèse of Lisieux http://www.storyofasoul.com/