It is a steep climb up to the Alhambra in Granada, so, on a recent visit, I was pleased for the break provided by an exhibition of giant photographs alongside the path. The images were of mountains from around the World and each had a caption in both Spanish and English. 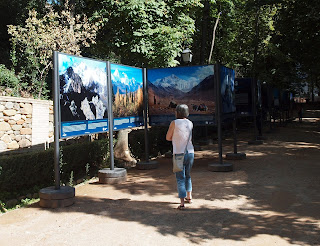 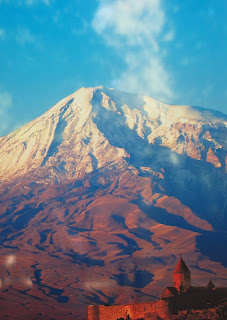 One of the photographs was of Mount Ararat and the English translation of the caption, together with the picture, is shown above. It said:

Mount Ararat 5137 m, 39° 42' 10" N, 44° 18' 01" E (Turkey). The highest point in Turkey is a huge stratovolcano very near the border of Armenia, where it is highly symbolic. Its place among sacred mountains comes from the Book of Genesis, which says that it was here that Noah's Ark landed after the Great Flood. Even though that has not been proven scientifically, the link between this peak and the Holy Scriptures is now unbreakable.

What interested me most about the caption to the photograph was the last sentence. How can the presence of Noah's Ark on Mount Ararat be proven scientifically? What would one look for: pieces of ancient wood remaining in clefts in the rock that could be carbon-dated? Of course, it is most improbable that any evidence of the presence of the Ark will ever be found and Wolfgang Kaehler, who wrote the caption, must be aware of that. He must also be aware that the "unbreakable" link between Ararat and the Ark is a result of the repetition of a single statement in The Bible. This is the quote from Genesis Chapter 8 Verse 4 (Authorised Version of the King James' Bible): "And the ark rested in the seventh month, on the seventeenth day of the month, upon the mountains of Ararat."

What would a scientist make of the rest of the story of Noah's Ark and the Great Flood, as given in the Book of Genesis (some verses omitted)? [1]:

I will destroy man whom I have created from the face of the earth; both man, and beast, and the creeping thing, and the fowls of the air; for it repententh me that I have made them. But Noah found grace in the eyes of the Lord.. ..And God said unto Noah, The end of all flesh is come before me; for the earth is filled with violence through them; and, behold, I will destroy them with the earth. Make thee an ark of gopher wood; rooms shalt thou make in the ark, and shalt pitch it within and without with pitch. And this is the fashion which thou shalt make it of: The length of the ark shall be three hundred cubits, the breadth of it fifty cubits, and the height of it thirty cubits.. ..And, behold, I, even I, do bring a flood of waters upon the earth, to destroy all flesh, wherein is the breath of life, from under heaven; and every thing that is in the earth shall die. But with thee I will establish my covenant; and thou shalt come into the ark, thou, and thy sons, and thy wife, and thy sons' wives with thee. And of every living thing of all flesh, two of every sort shalt thou bring into the ark, to keep them alive with thee; they shall be male and female.

From this, we know therefore that the ark was 114-156 metres long, 19 – 26 metres wide, and 11 – 16 metres high. Its construction would have been a formidable challenge, even for a team of boat builders, and many people must have been curious as to why Noah had decided to create such a huge craft. It could hardly have been a secret shared only between Noah and his immediate family. As to the likely passengers, there would not be enough room for two of all species of terrestrial creatures (if this was to be based on species) and what about those creatures that do not have male and female forms? As God had created microorganisms, protists, simple plants and invertebrates, it is not known whether these were to be saved, and "every living thing of all flesh" is difficult to interpret.

Here, we have clarification that "every living substance" remaining on Earth failed to survive the flood, with the inundation lasting nearly five months. There is still no information about which of the "living substances" were taken on board the ark, but the removal of all humans, other that Noah and his offspring, means that we must all have descended from this lineage. Noah's great age seems typical for the time, his ancestors dying when they were 777 – 969 years old, having fathered children at the ages of 65 – 187 [3]. Clearly, there was a different life span in those days, or the Biblical account of age cannot be trusted. Evidence points to the latter, with an increasing life expectancy over the past thousand years that is unlikely to have been bettered in ancient times. Very few people now live to be more than 110 years old and to father children at an age of 150+ is unheard of. Clearly, Biblical references to time must be viewed with suspicion.

Another question that arises from the account in Genesis is what happened to aquatic organisms. The volume of fresh water that appeared from the rains (but where did these come from in such massive volumes) would allow survival of many creatures that lived in rivers and lakes, but those inhabiting marine shores would have been badly affected by the reduction in salinity. As waves and storm events only affect the very surface waters of oceans, and the fresh water of the Great Flood would "float" on the salty sea water, it is likely that most marine organisms, other than those confined to surface waters, survived the flood, although no mention is made of this. For those who believe in evolution, life began in the sea, so there was the opportunity of re-colonising terrestrial habitats once the flood had abated, although the time to achieve the current diversity is impossibly short – it would take hundreds of millions of years – and the only explanation acceptable to those who take the Bible to be true, is that re-colonisation was by the survivors from the ark. 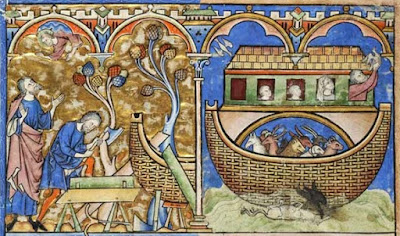 The story of Noah's Ark seems highly improbable, but that does not rule out the possibility that there was a large-scale flood at the time. In an earlier article [4], I proposed that the chronology of the Ten Plagues of Egypt could be explained by unusual climatic conditions and there have undoubtedly been periods of the Earth's history when there were dramatically volatile meteorological events, especially after asteroid impacts, volcanic eruptions, earthquakes, and other massive upheavals. Perhaps the flooding at the time of Noah resulted from one of these?