As a student of Zoology and Botany in the 1960s, much time in practical classes was spent making drawings; either of dissected animals, or of preparations of plants made by sectioning and staining. This was a practice little changed from the heyday of Natural History during the Nineteenth Century.

One of the great illustrators of that period was Philip Henry Gosse, and his son, Edmund, described his zealous approach [1]:

I have often known him return, exhausted, from collecting on the shore, with some delicate and unique creature secured in a phial. The nature of the little rarity would be such as to threaten it with death within an hour or two, even under the gentlest form of captivity. Anxiously eyeing it, my father would march off with it to his study, and, not waiting to change his uncomfortable clothes, soaked perhaps in sea-water, but adroitly mounting the captive on a glass plate under the microscope, would immediately prepare an elaborate coloured drawing, careless of the claims of dinner or the need of rest. His touch with the pencil was rapid, fine, and exquisitely accurate.

Unfortunately, my efforts were nowhere near the equal of those produced by Henry Gosse and his meticulous illustrations resulted from talent, practice and the training that he received as a boy from his father, a professional painter of miniatures. Edmund describes Henry's work as having:

..no distance, no breadth of tone, no perspective; but a miraculous exactitude in rendering shades of colour and minute peculiarities of form and marking. In late years he was accustomed to make a kind of patchwork quilt of each full-page illustration, collecting as many individual forms as he wished to present, each separately coloured and cut out, and then gummed into its place on the general plate, upon which a background of rocks, sand, and seaweeds was then washed in. This secured extreme accuracy, no doubt, but did not improve the artistic effect, and therefore, to non-scientific observers, his earlier groups of coloured illustrations give more pleasure than the later. 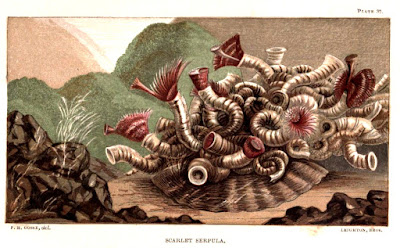 I have been fortunate to see some of Gosse's original work [2] and it certainly commands admiration. For Henry Gosse, illustrations (an example of which is shown above) were for a purpose other than art, although he painted watercolours of landscapes during old age, purely for his own interest.

Students today must find it strange that we spent so much time drawing, and Gosse may well have appreciated the digital techniques available now for capturing images, whether in situ, or by using light, or electron, microscopes. Although I accept that my draughtsmanship is poor, and I lack the tenacity and endurance of Henry Gosse, I do enjoy creating something "artistic" from Natural History. One of the more successful attempts comes from collecting fungi and making spore prints (three examples being given below). Although the fungi lose their lustre rapidly, spore prints can be preserved using artist's fixative and they provide a pleasing record of solitary walks in local fields and woods [3]. 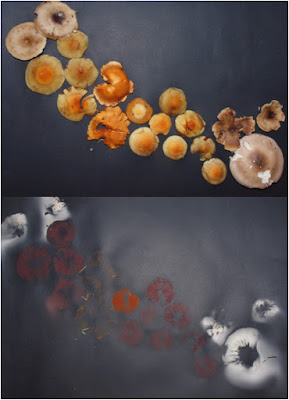 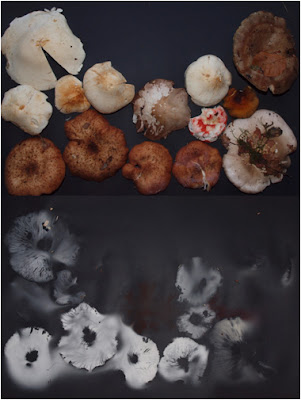 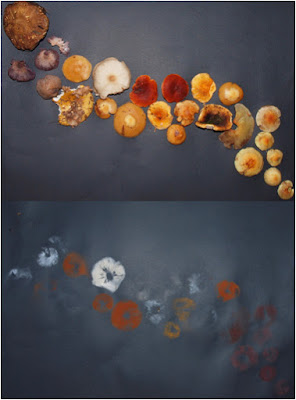 [1] Edmund Gosse (1896) The Naturalist of the Sea-Shore: The Life of Philip Henry Gosse. London, William Heinemann.