At the beginning of the week, I was walking through a water meadow when a kingfisher flew by, perched on a tree branch, and then darted off and away under a bridge and out of view. I always love seeing kingfishers, even when I'm not lucky enough to be able to admire them through binoculars, and there's something thrilling about their wonderful colours and their habits. 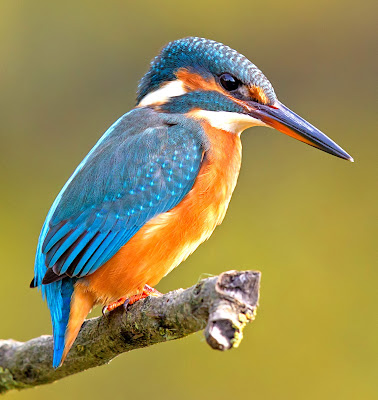 It is a feeling that I, and many others, share with Charles Waterton, who wrote in his Essays on Natural History [1]:

When the delicious season of spring sets in, I often get up into the topmost branches of a wide-spreading oak [Waterton was an enthusiastic climber of trees]; and there, taking the Metamorphoses out of my pocket, I read the sorrows of poor Halcyone. A brook runs close by the tree, and on its bank I have fixed a stump for a resting-place to the kingfisher. On it, this pretty bird will tarry for a while in passing up and down, and then plunge into the stream, and bring out a fish. My elevated station on the oak gives me a fine opportunity of admiring its back, as it darts along beneath me. When the sunbeam is upon it, no words can do justice to the beauty of the glowing azure which attracts the eye.

In the passage of Metamorphoses [2] that Waterton was reading, Ovid describes how Alcyone and her husband Ceyx die and:

..both were changed to birds, the halcyons. Though they suffered the same fate, their love remained as well: and their bonds were not weakened, by their feathered form. They mate and rear their young and Alcyone broods on her nest, for seven calm days in the wintertime, floating on the water's surface.

Although, Morford and Lenardon [3] describe them as seabirds, Alcyone and Ceyx are more commonly regarded as kingfishers, just as Waterton supposed. Given their splendid appearance, it is not surprising that kingfishers play a role in mythology, although one of the myths that surrounds the birds is much more prosaic. In Britain, a kingfisher suspended on a string is thought to act as an effective weather vane, a practice that continued up to the 1920s in some areas [4].

The blue colour of the feathers is not caused by pigment but by iridescence, as described by Silvia Vignolini [5]:

Most vertebrates are unable to produce blue pigment. The orange of kingfisher plumage is the product of tiny pigment granules but its cyan and blue feathers contain no pigments. These colours are 'structural'. They are created by the intricate structural arrangement of a transparent material which, depending on its precise make-up and thickness compared to the tiny wavelength of light, produces a range of colours by 'incident light' – in other words light shining on the sample.. ..Kingfisher feathers reflect light in a way that scientists describe as semi-iridescent.. ..Iridescence is produced by the ways in which layers of material are perfectly aligned and repeated periodically to achieve a shimmer effect. Semi-iridescence is produced when the layers are not quite perfectly aligned but slightly disrupted, thus causing a smaller span of iridescent colour. 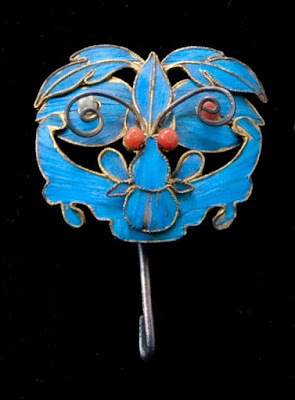 A little complicated, but it is clear that the blue feathers of the kingfisher are the result of optical effects and not pigment, while the orange feathers do contain pigment. The overall effect is appreciated by all of us who see the birds flashing by when we take a walk, or sit in a tree, and it is easy to see how they have stimulated poets like William Henry Davies [6] and Gerard Manley Hopkins [7], as well as being the source of myths. Kingfishers of various kinds also feature in Japanese prints, while the blue, semi-iridescent feathers of the Eurasian kingfisher have been used by Chinese artists in the manufacture of tian-tsui [8 - and see above]. It is not just the colour and habits of the kingfisher that have stimulated our imagination, as the shape of the beak of an Eastern species was the inspiration for the design of the nose of the 500 series Shinkansen trains in Japan [9 – and see below]. Both structures have an optimal design to reduce pressure: for the kingfisher when diving into water, and for the Shinkansen 500 when passing through tunnels and other constrictions that reduce the easy displacement of air. 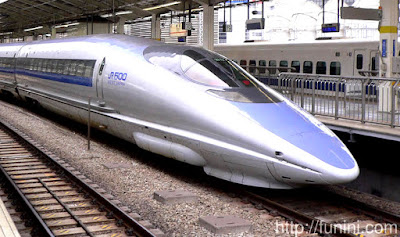 It is tempting to think that the structure and appearance of kingfishers were somehow designed for our benefit and some Creationists may believe this to be so. In contrast, they are more likely to result from evolutionary processes that selected for mutations affecting changes in the shape of the beak and colours of feathers that, far from camouflaging the bird, make them highly visible. We don't know why that should be and neither can we know how kingfishers look to other kingfishers. However, I'm so pleased that they evolved in the way that they did.

[4] Steve Roud (2003) The Penguin Guide to the Superstitions of Britain and Ireland. London, Penguin Books.

[In this post, the kingfisher referred to is Alcedo atthis, unless otherwise stated.]
THIS IS A VERY POPULAR BLOG POST. IF YOU FIND IT INTERESTING, WHY NOT TRY ONE OF THE OTHER 250 POSTS ON MY BLOG? Best wishes, and thanks. Roger
Posted by Roger at 07:13