Decoration in humans and other animals


A wide variety of animals decorate their outer surface. In a review paper, Graeme D. Ruxton and Martin Stevens [1] have defined a decorator as:

..an organism that (by means of specialist behaviour and/or morphology that has been favoured by selection for that purpose) accumulates and retains environmental material that becomes attached to the exterior of the decorator.

This definition is a bit complicated as it is designed for an audience of scientists, but you get the drift. Ruxton and Stevens then give us some examples, beginning with decorator crabs (below left) that attach all sorts of materials to hooked hairs present over the body of the animal:

Several studies..have found that experimentally altering or removing decoration [from decorator crabs] increased vulnerability to predators.. ..Items used in decoration are often chemically defended plants or sessile animals, and it seems plausible that predators detect the crab but actively avoid attacking because of the repellent smell or taste from the decorations. However, not all decorations provide the animals with chemical defence, and it is likely that decoration often functions through crypsis via background matching, masquerade and/or disruption.

Another type of decoration is seen in insects that use faecal shields, an example being larvae of the tortoise beetle (above right), where faecal pellets are retained on an extension of the body, so that the solidified shield provides cover for attack by predators. The shield acts both in crypsis and as a physical defence [1], isolating the body from potential attacks; other insects use a covering of faecal material directly on the surface of the upper body. However, decoration in insects is not confined to the use of faeces: other components of "backpacks" may be cast skins from moults, or organic, and mineral, grains obtained from the surrounding environment and stuck on to the back by secretions, or held there on hairs extending from the body surface.

Decoration is also used by birds (and I am not including those, like bower birds, that make collections of bright objects remote from the animal itself). To quote Ruxton and Stevens [1]:

In birds, a range of species add substances to their feathers that alter their appearance (termed cosmetic coloration).. Staining of the feathers with soil has been observed in a number of large birds.. ..Both sexes [of the rock ptarmigan] sport all-white plumage at the start of the breeding season, as snow melts this becomes very conspicuous and females moult to produce feathers that appear to offer good camouflage. By contrast, males do not moult immediately, but smear their feathers with soil before later moulting into a brown plumage.

Free-ranging adult bearded vultures..typically have an orange colour on their underparts, neck and head conferred by iron oxide-rich soils.. .. Colour tends to be greater in (socially dominant) females than males and increases progressively from juveniles, to immatures, to sub-adults to adults.

Ruxton and Stevens conclude their review by saying [1]:

Decorating is a particularly diverse activity, and (like tool-use) it is difficult to produce an unambiguous definition that covers all cases effectively.. .. Anti-predator benefits are most commonly postulated, in contrast to humans where decoration functions strongly in social interactions.

Their last sentence set me thinking. Unless one believes in Creation, it is not possible for us to look at the behaviour of our own species without realising that much of it developed as we evolved so successfully away from the rest of the Animal Kingdom. In this post, I describe the origins of human decoration, confining myself to clothes, accessories and make-up, as these best fit the definition given above.

Humans lack a dense covering of hair over the whole body and it is likely that our first use of decoration was by draping ourselves in animal furs that were protective and helped to keep us warm. It could be argued that this enabled early humans to migrate to regions with cooler climates, something that was also facilitated by the discovery of fire, but it is unlikely that animal pelts provided camouflage against predators. Camouflage coverings are certainly important in providing crypsis in warfare and they form an important part of the clothing using by contemporary fighters (below), together with applied face paints. This is analogous to the main use of decoration used by animals but most of our clothing, in addition to its functions of keeping us warm and protected, is used in expressing social status, for mate selection, or for group identity. 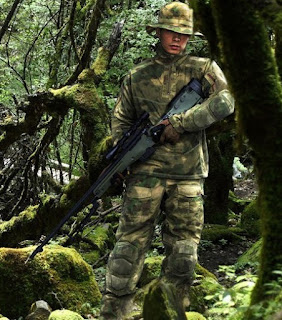 Among contemporary costume, the business suit is currently de rigeur for men in many countries and in many walks of life, with only small changes in the design of a jacket and trousers. There is status in having a designer label and this is true also of all clothes, something that conveys both the quality of materials and tailoring, but also exorbitant cost. The expression of wealth in this way is important in Western Society, as is the quantity of items in an individual's collection. Surprisingly, while the business suit represents a work uniform (although casual clothes for men are more varied), women's fashion is based on variety, and it is considered acutely embarrassing to wear an outfit that is identical, or too similar, to that worn by someone else at the same social function. Despite trends in fashion, decoration in women is thus less about uniformity and more about the uniqueness of the individual. Why?

The answer to this question probably lies ancestrally in mate selection. Humans do not have a breeding season and mating can occur at any time through the year. Mate selection is based on genetic factors – the classic notion of handsome men and beautiful women pairing up – but also on decoration. Clothes are an important part of this and initial mate selection is often influenced by clothes, as these convey information about social status and identity, something that is important if mate selection is for the long-term and where breeding is likely. Of course, there are more factors than decoration involved in selection, but it forms an initial signal, with most encounters initiated by men.

In addition to the decoration provided by clothes, there are also accessories, especially used by women, and we all know individuals with a shoe and/or handbag addiction. The most similar parallel to animal decorators comes in jewellery in all its forms. This type of decoration may emphasise status, as in the integration of precious stones, or be used as a symbol of lack of availability, as in wedding rings. Similar forms of decoration are present in many tribal cultures, not just those of the Developed World, and extend to neck rings, necklaces, nose plugs and rings, ear plugs, earrings and many other forms. They are not confined to women either, as they are used by both sexes as indicators of cultures and sub-cultures, something unknown among animals other than humans.

It is ironic that one design of earrings is based on the activity of an animal decorator. Larvae of some caddis flies make cases of stones that are bound together with silk secreted by the insect. This habit has been utilised by jewellers who give larvae semi-precious stones and wait for each earring to be produced [2]. It's the only example I can think of where the activity of one decorator animal is used by another, albeit for a different purpose.

In addition to clothes and accessories, considerable attention is given to enhancing the appearance using paints and powders of various kinds. Use of ochre and ash in face and body colouration is a characteristic of some "primitive" tribal groups, but make-up in Western Culture is usually more subtle, with concentration on the face. As with clothes and accessories, there are variations but, in general, powders are used to enhance the complexion and to hide blemishes, while various products are used to decorate the eyes and lips to provide emphasis. Although men use cosmetics, women are the main users and, as with other forms of decoration, the underlying message is related to mate selection and/or belonging to a social group. 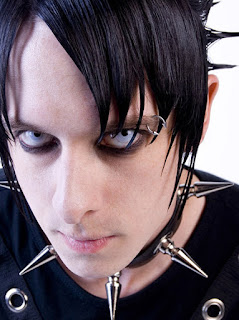 Just as humans evolved rapidly, so did our use of decoration. It now has many forms and is constantly changing, except in tribal cultures and where national costume, or work customs and uniforms, create an identity. However, we are animals and the origin of our use of clothing, accessories and make-up lies far back in evolutionary time.