Sherlock Holmes, fairies and our imagination


Sherlock Holmes is the most famous fictional detective in the World, first appearing in a series of short stories in The Strand Magazine. As a result, his inventor, Sir Arthur Conan Doyle, is afforded the respect of a near-infallible sleuth. However, there was one case reported by Conan Doyle that showed some flaws: his support for the reality of the Cottingley Fairies, named after the village in Yorkshire where they were supposedly seen.

In 1920, Conan Doyle wrote an article in The Strand Magazine [1] supporting the view that two photographs of fairies, taken by two young girls, were real and not faked. To protect the identity of the girls, he used pseudonyms in his article and thus in the captions to the two photographs (shown below). One is labelled "Alice and the fairies" (taken in July 1917) and the other "Iris and the dancing gnome" (taken in September 1917, when Frances Griffiths (Alice), who was just 10-years-old, was staying with her 16-year-old cousin Elsie Wright (Iris). Elsie used her father's recently-acquired plate camera to take the first photograph and the second was taken using the same camera, presumably by Frances. The images intrigued Conan Doyle when he saw them three years later, prompting his article. He was convinced that the fairies in the photographs were real and three further plates, taken later, gave further evidence for his conviction. 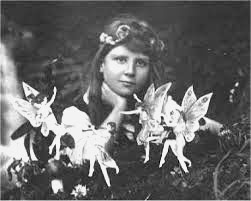 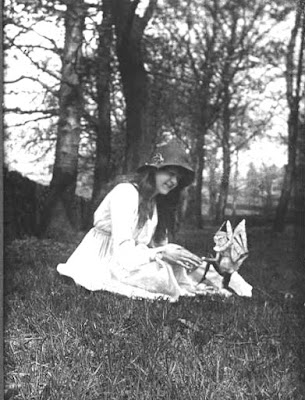 Conan Doyle summarised his views, and those of others, in his book The Coming Of The Fairies [2], that appeared in 1922 and contains the article from the Christmas 1920 edition of The Strand Magazine. Several points from the article (that I have read in the original) are worth elaborating. Much centres on a report by Mr Edward L Gardner, a member of the Executive Committee of the Theosophical Society, who met with the girls, and other members of the family, after he was shown the photographs in 1920. Mr Gardner consulted experts in photography, who confirmed that they were genuine; he visited the spots where they were taken; and he met members of the family. His conclusion was:

Extraordinary and amazing as these photographs may appear, I am now quite convinced of their entire genuineness, as indeed would everyone else be who had the same evidence of transparent honesty and simplicity that I had.

That was good enough for Conan Doyle, who, as a Spiritualist, wanted to accept the evidence at face value. However, the investigative side of his nature, so evident in Sherlock Holmes, provided a note of caution. This was his conclusion after seeing the two photographs:

There is one point of Mr Gardner's investigation that should be mentioned. It had come to our knowledge that Iris [16 year-old Elsie] could draw, and had actually at one time done some designs for a jeweller. This naturally demanded caution, though the girl's own frank nature is, I understand, a sufficient guarantee for those who know her. Mr Gardner, however, tested her powers of drawing, and found that, while she could do landscapes cleverly, the fairy figures which she had attempted, in imitation of those she had seen, were entirely uninspired, and bore no possible resemblance to those in the photograph...

Other well-authenticated cases will come along. These little folk who appear to be our neighbours, with only some small difference of vibration to separate us, will become familiar The thought of them, even when unseen, will add a charm to every brook and valley and give romantic interest to every country walk. The recognition of their existence will jolt the material twentieth-century mind out of its heavy ruts in the mud, and will make it admit that there is a glamour and a mystery to life.

Like many adherents of clairvoyance etc., Conan Doyle suggests that those with supernatural powers are able to see such apparitions when those without such skills cannot [2]. A propensity to see things is thus a prerequisite for witnessing them and this must apply to all apparitions, whether they are ghosts, little people, or even the Virgin Mary. There are still those who believe the Cottingley Fairies existed, and plenty more that have sympathy with the views expressed in the last paragraph above. However, the photographs were the result of a hoax, as revealed in an interview by Joe Cooper with Elsie and Frances a few years ago [3].

It is interesting that Conan Doyle himself was close to solving the mystery. In The Strand Magazine article he writes this about the first photograph:

..the two upheld hands of the elves [in the first photograph] seen under a high power do not appear to be human, nor does the left foot of the figure capering on the right. The hands seem furred at the edges and the fingers to be in a solid mass. This also may be due to movement and position, but it is curious that both hands give the same impression.

The figures were cut out from a book and it was not possible to cut round each finger, so the whole hand appeared rather solid. Each figure was then fastened to  a hat pin and inserted into the ground in front of Frances. Conan Doyle's deduction did not go this far, as he wanted the fairies to be real and this overcame his doubt.

According to experts, fairies come in many forms [4,5], in addition to those, like the Cottingley Fairies, that are the common type of benevolent creatures made popular in countless illustrations and films. As Katharine Briggs remarks in a section of her book dealing with whimsy [4]:

When they were given butterfly and dragonfly wings they were reduced to almost the status of insects, and in the sheltered days of the early twentieth century every care was taken to render them unalarming.

Briggs remarks that this tradition of fairies being winged had been in existence for over 200 years and probably originated when insects were being observed and human imaginations then left to run riot. An example can be given in a quote from a correspondent in Seeing Fairies by Marjorie T. Johnson [5]:

My sister was standing near the snapdragon plant in our garden when she saw a movement on it, and a tiny fairy flew out and settled on her arm for an instant, perhaps trying to show her gratitude to my sister for putting the stake [that supported the plant] there in the first place. When I asked for a description, my sister said she didn't look more than one and a half inches high and was "silvery, with small silver wings"..

So, in the view of those that believe in fairies, where do they fit into evolution?  Conan Doyle gives us the opinion of Edward Gardner, the Theosophist:

Fairies are not born and do not die as we do, though they have their periods of outer activity and retirement. Allied to the lepidoptera, or butterfly genus, of our familiar acquaintance rather than to the mammalian line, they partake of certain characteristics that are obvious. There is little or no mentality awake—simply a gladsome, irresponsible joyousness of life that is abundantly in evidence in their enchanting abandon. The diminutive human form, so widely assumed, is doubtless due, at least in a great measure, to the powerful influence of human thought, the strongest creative power in our cycle.. ..The wings are a feature that one would hardly expect to find in conjunction with arms. In this respect the insect type, with its several limbs and two or more wings, is a nearer model. But there is no articulation and no venation, and moreover the wings are not used for flying.

In contrast, one of Marjorie Johnson's correspondents reports that "wingless fairies can soar through the air quite effortlessly" but:

..it is possible that they [fairies] have evolved from butterflies, since they attach so much importance to the use of their wings.. .. fairies, which are fully materialized, fly like butterflies by the power of their densified wings.

Conan Doyle [1] wrote that "A.. ..general observation is that the elves are a compound of the human and the butterfly, while the gnome has more of the moth." Confusing isn't it? There seems to be agreement that fairies evolved from butterflies, but what about the fairies with dragonfly wings? What were the steps in evolution that led to these insects/creatures having the appearance of a human body? We know that it is impossible for human-like figures to fly with insect wings, just as it is for angels to fly with bird wings [6], so do those that believe in wood and water spirits, of which fairies are a part, view them as part of evolution on Earth, or as something completely supernatural, like angels? For those that do not believe in a supernatural, there is no problem, except puzzlement at the level of imagination shown by all humans in what we believe.