How did humans become such unique animals?


After conducting experiments on the preferences of "semi-free-ranging" chimpanzees when presented with cooked food, Felix Warneken and Alexandra G. Rosati [1] suggested that: "The transition to a diet of cooked foods – involving the use of heat in food preparation – was a fundamental change for our species." This point was taken up in an article by Pallab Ghosh, the BBC Science Correspondent [2]:

According to Dr Warneken [and Dr Rosati], his experiments show that most of the mental skills needed to cook were there in human ancestors between 5 to 7 million years ago and so all it took for the first emergence of the culinary arts was the controlled use of fire and the ability to trust other people not to pinch our food while our back was turned..

..The motivation for the study was to investigate a controversial theory that cooking was necessary for human brains to become larger. The idea by the primatologist Prof Richard Wrangham.. ..is that cooking enabled our ancestors to eat more protein, which helped our ancestors develop their brains.

The BBC article went on to include extracts from an interview with Professor Fred Spoor of UCL:

Cooking did not happen until 300,000 to 400,000 years ago. That is late in 7 million years of human evolution, so to put it bluntly, who cares that early humans may have liked the idea of cooked food?..

..Substantially larger brains initially emerge around 1.5 million years ago and a major leap was around 500,000 years ago.

The series of quotes led me to think about how humans developed their unique position in the Animal Kingdom, with the power to manipulate the environment to an extent quite unlike that of any other organism. I dismiss the Creationist argument that humans resulted from the invention of a supernatural force and accept that our extraordinary capacities evolved from the nucleus of possibility in our ape-like ancestors. It was the phrase "the ability to trust other people not to pinch our food while our back was turned" that had me wondering about an explanation. 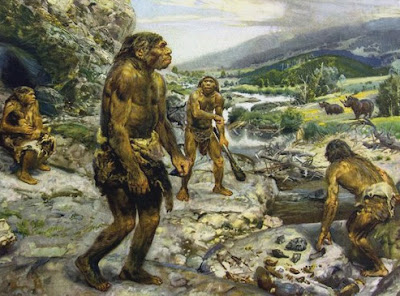 Let's assume our distant ancestors lived in family groups and that they foraged for food, gathering vegetable material and hunting animals, all of which were eaten without cooking, as this method of food preparation had yet to be discovered. Families are closely related genetically and the survivorship of individuals, and thus their "selfish genes", will have been enhanced if the hunters were successful in providing plentiful food to ensure the survival of all individuals. Let's assume further that hunters from several families joined together to make hunting more efficient and make the capture of larger prey possible. Interactions between members of this larger group would have required signals – vocalisations, movements of limbs, and facial expressions – that had evolved to give clearly understood information.

After years of successful co-operative hunting, what if one group of individuals gave the signal to co-operate, but then took the catch for themselves, maybe killing some individuals in other families to ensure plenty for their own family at a low cost? The signals no longer have their original meaning and the offer to form joint hunting groups, of advantage to all participants, now carries the risk of a different, less advantageous, outcome. There was thus a need to interpret meaning in communication, with the most successful manipulators, and the best readers of false signals, having the highest chance of survival.

If there was also selection of the optimal neural pathways needed to aid interpretation, these would be fixed in the population and the process of analysing hunting signals, and signals of many other kinds, would become more and more refined. This new consciousness would extend to humans asking questions about the environment around them, forming a complex language structure to explain meaning, and, with further development of the brain, a need to ask abstract questions like: "Why are we here?”; “Is there a supernatural force?”; and “What is good and evil?”.

Or perhaps it was not like that at all?