Two wonderful Museums – and mention of another


As a child, I was fascinated by a box that was kept in a back room of our house and which contained "curios". I cannot remember all the bits and pieces in the box, but there was a claw (from a tiger?) and some coarse hair that was said to come from a giraffe's tail. It was our family's cabinet of curiosities, like those kept by Nineteenth Century collectors and Natural History enthusiasts, but I've no idea where the claw and hair came from. Perhaps they were given to my parents by a contact who, unlike us, had travelled widely? I now think the source was more likely to be Paignton Zoo, within easy walking distance of where we lived.

It is possible that my interest in Natural History Museums developed from my fascination with the curios, although I also enjoyed looking at plants and animals while walking in the countryside, or looking in rock pools and streams. It certainly grew when I went into the Sixth Form of Torquay Grammar School and began studying Botany and Zoology at A-level. For some reason, our classes in those subjects were held at the local Technical College, that shared the same campus as the school, and this brought much more freedom. Instead of going to the School Library, a group of us now spent time collecting animals on the shore during our free time, something that was completely against school regulations. Occasionally, we made trips to Exeter to visit the Royal Albert Memorial Museum and little did I know then that the RAMM was to provide a delightful surprise over fifty years later when a Curator, Holly Morgenroth, kindly let me see their collection of drawings by Henry and Edmund Gosse [1,2] – and to think they were there during my schoolboy visits all those years before (although not on display).

It was during the Sixth Form that I joined the Torquay Natural History Society and this allowed me free access to talks and also to their Museum. It was rather musty and dark at that time, not like the welcoming place it is today, and I spent hours in the Library, with its smell of dust and old leather, and volumes going back to the Seventeenth Century. One I remember was printed in London in 1666 and that set me thinking whether this was before, or after, the Great Fire and what a story that book could tell. Being free to look through the exhibits and the books was just like being given a very large box of curios to me. 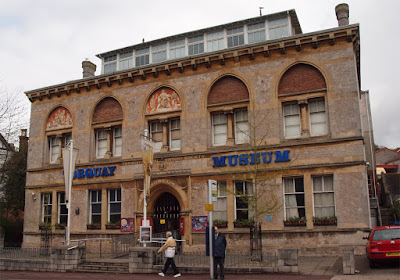 The Torquay Museum is housed in a building dating from 1874 (see above), collections previously having been in more temporary quarters [3]. The secretary of the Torquay Natural History Society from 1851 to 1890 was William Pengelly who was made an FRS for his many contributions to palaeontology, especially after the excavation of caves in the Torbay area.  A quote from a biography of Pengelly by his daughter [4] emphasises the central role he played in the development of the Society and I certainly owe him a debt of gratitude, for my love of museums started in Torquay:

It was indeed mainly due to Mr Pengelly's energy that the autumn of 1844 witnessed the foundation of the Torquay Natural History Society. Over its early fortunes he exercised the most watchful care, and in 1851 he was induced to accept the office of honorary secretary, an office which he continued uninterruptedly to hold, to the unspeakable advantage of the Society, for no less than nine-and-thirty years.. ..Year after year he lectured there, tincturing the locality with his own enthusiasm; and from the Society there ultimately sprang the Museum in Babbacombe Road, with its admirable local collections. In the reading-room attached to the Museum there fitly hangs an oil-painting of the man whose individuality is unmistakably marked upon the entire institution – William Pengelly

Pengelly, unlike the "other Torquay  FRS", Henry Gosse, was a regular visitor to London and he was acquainted with E. Ray Lankester, the eminent Zoologist who held the Jodrell Chair at University College London, attending conversazione that were held by that great academic. Lankester had a wide circle of friends and contacts, extending to Karl Marx, H. G. Wells and Anna Pavlova, so he wasn't just well known in his own field. In their monograph on Lankester [5], Lester and Bowler state that, although they mainly communicated through correspondence, he "much admired" Gosse and Edmund Gosse writes [6]:

Among the younger zoologists of the day, few of whom were personally known to my father, there was not one in whose discoveries and career he took a livelier interest than in those of Professor E. Ray Lankester, for whom, from his earliest publications, he had predicted a course of high distinction. 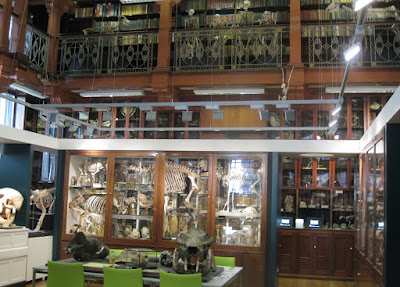 As Jodrell Professor, Lankester inherited the Zoology Museum built up by his predecessor Robert E. Grant (for whom the museum is now named), adding considerably to the collection. The museum is still used for teaching undergraduate and postgraduate students, but it is also open to the public and all who visit appreciate its wonders as it has a powerful atmosphere of the glory days of the Nineteenth Century [7]. Its current location, that shows off the collections so well, is the latest in a series and one hopes that it will remain there for a long time. Of course, the Grant Museum of Zoology is not just about teaching and connecting with the heyday of Natural History; it is also very contemporary, with some wonderful displays to attract and fascinate visitors [8] and a blog that is always worth reading [9]. One novel approach to develop interest is a scheme to adopt a specimen and I did this eagerly, choosing a sea slug Marionia quadrilatera (see below, with the adoption certificate). I chose it as I taught Aquatic and Invertebrate Biology, and a sea slug is appropriate for both. Interestingly, it was part of the collection added to by Lankester and may well have been one of the many specimens brought back from Naples in 1885 [5] by Alfred Gibbs Bourne, a student of Lankester's (note that the jar is labelled "Naples"). 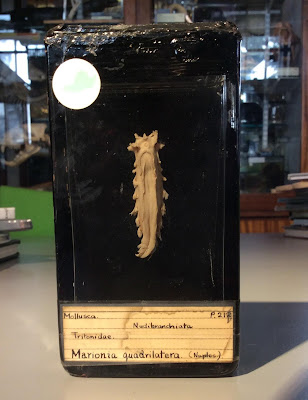 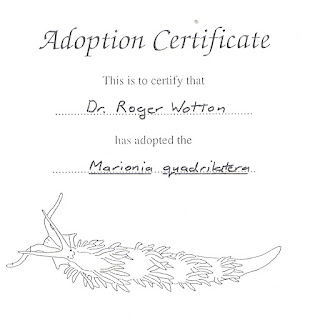 While a member of staff at UCL, I listened to one neophyte colleague chatting about the destiny of the Museum of Zoology and how much better it would be to use space for laboratories and contemporary biomedical research. I found this sad and was delighted to serve on the UCL Museums and Heritage Committee where there were never discussions of this kind and where we focussed on the marvellous collections held by the University. Heritage is so important and I'm delighted that Lankester still looks out at the Museum (albeit from a photograph – see below - with specimens of Limulus, about which Lankester wrote an important essay [5]), just as Pengelly looked out in the Library of the Museum in Torquay. I like those connections. 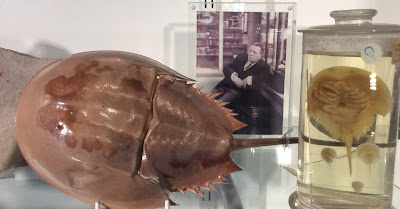 [6] Edmund Gosse (1896) The Naturalist of the Sea-Shore: The Life of Philip Henry Gosse. London, William Heinemann.

Photographs were taken with the permission of the UCL Grant Museum of Zoology.
Posted by Roger at 07:47