Charles Darwin’s last major work, published when he was 72 years old, was on earthworms and the way they transform vegetable matter and soil profiles. He understood that earthworms ingested as they burrowed and the main beneficial effect was provided by their faecal material, as well as the soil aeration that resulted from their burrows. The faecal material is sometimes egested on the surface to provide casts, but it is mostly retained within soil profiles and earthworms also bring organic matter from the surface to be eaten, and then egested, below ground.

There was no doubting Darwin’s enthusiasm for his subject, and the hours of observation that he devoted to it. In the Conclusion of The Formation of Vegetable Mould, he writes [1]:

Worms have played a more important part in the history of the world than most persons would at first suppose.. ..Worms prepare the ground in an excellent manner for the growth of fibrous-rooted plants and for seedlings of all kinds. They periodically expose the [vegetable] mould to the air, and sift it so that no stones larger than the particles which they can swallow are left in it. They mingle the whole intimately together, like a gardener who prepares fine soil for his choicest plants.. ..They allow the air to penetrate deeply into the ground.. ..The plough is one of the most ancient and most valuable on man’s inventions; but long before he existed the land was in fact regularly ploughed, and still continues to be thus ploughed by earth-worms. It may be doubted whether there are many other animals which have played so important a part in the history of the world, as have these lowly organised creatures.

It is impossible not to disagree with Darwin’s comment on the significance of earthworms, although we now recognise that their efforts are aided by bacteria and fungi that release nutrients during the re-packaging activities of the worms.  During their feeding, worms only assimilate a fraction of the organic matter that they ingest, so their role in transformation is a major one, as they are numerous and feed continuously as they burrow. Any gardener making a compost heap is familiar with the changes to organic matter brought about by worms, aided by a range of other invertebrates that are similarly ingesting, assimilating little, and egesting compacted faecal material. This compaction ensures that micro-organisms that break down complex organic molecules to release nutrients are packed close to potential substrates.In soil, everything becomes mixed with mineral particles.

Although there are at least 6000 species of earthworms, the majority conform to the same body plan and we are hard pressed to tell one species from another. When we look closely at earthworms, we see that they are segmented and this is not just an external feature, as the body is separated into segments internally, with sheets of tissue called septa separating each segment from that preceding and that following. The body wall of the earthworm is made up largely of muscle and a resistant covering that protects the worm from abrasion, together with an epidermis containing secretory cells. The long tubular gut runs along the length of the worm, passing through the septa, and the space between the gut and the muscles is filled with coelomic fluid to form a hydrostatic skeleton. This fluid is the secret of the earthworm’s characteristic method of locomotion, together with the use of small spines called chaetae (or setae) that are projected through the body wall by muscles.

Movement, and burrow formation, is achieved by means of the alternate contraction of the circular and longitudinal muscles in each segment (see below, taken from [2]). When the circular muscles contract, the segment becomes narrower and the pressure on the coelomic fluid causes it to lengthen. Conversely, contraction of the longitudinal muscles shortens the segment and makes it broader. By having a sequence of contractions of each muscle set in succeeding segments, the result is a wave of contraction and expansion that passes along the worm's body. The most anterior segments act as a "battering ram" during circular muscle contraction and the worm’s body is anchored by means of the segments where longitudinal muscles are contracting, the pressure exerted on the burrow walls being enhanced by the pushing out of the chaetae that act like crampons. A summary of the sequence is shown in the second diagram below, and the worms use a similar method to move over surfaces, on the few occasions when they are not burrowing. This use of hydraulic pressure provides an elegant solution to moving without the use of limbs, and lubrication is aided by mucus secreted over the body surface from glands in the epidermis. It's another wonder of evolution. 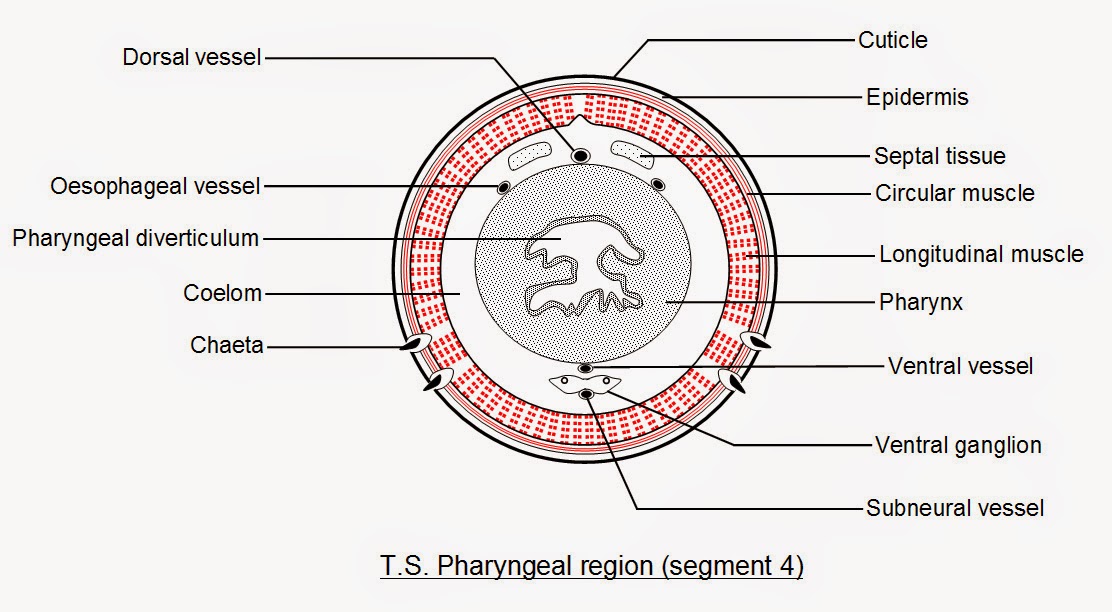 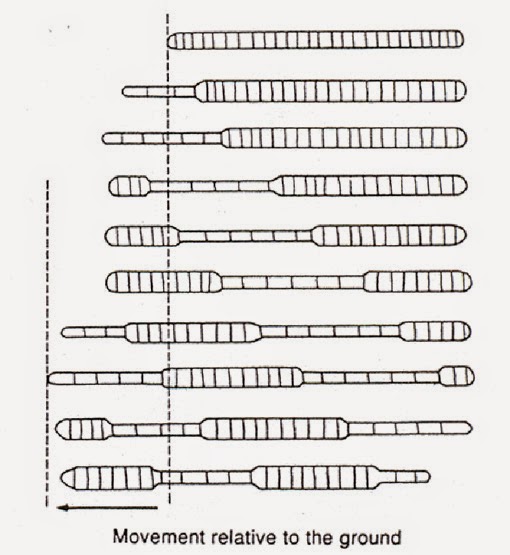 As mentioned earlier, we take the soil moving, and composting, activities of earthworms for granted and they are indirectly of great importance to us; but there are other ways in which earthworms are useful to humans. For example, they provide bait for fishing and earthworm oil is used to entice fish to attack plastic lures [3]. Further uses of earthworms come in medicine, where extracts have been shown to enhance the healing of skin wounds [4] and in the reduction of cell death in heart muscles after infection [5].

One way of exploiting earthworms that has been little explored in Western culture is as food for humans, despite worms being an important part of the diet of several other mammals and some birds. The cross-sectional view of a body segment (shown above) reveals the size of the two sets of muscles used in locomotion and it is a surprise that this source of animal protein has not been investigated more thoroughly. There are recipes available, and a few can be given here, but a warning is required before trying them, as the gut contents of earthworms may be gritty and it is probably best to ensure the worms have egested as much mineral material as possible before using them in cooking. Experiments with feeding worms on sage plants, other culinary herbs, and grains such as corn meal, might be worthwhile before preparing the worms for cooking: there are also interesting possibilities for flavour combinations from such experiments, with the worms providing their own stuffing. Here are some links to dishes you might like to try:

Earthworm sauté (and other recipes): http://www.eattheweeds.com/cooking-with-earthworms-2/

- or eat them just as they are (the preferred method of young children....) 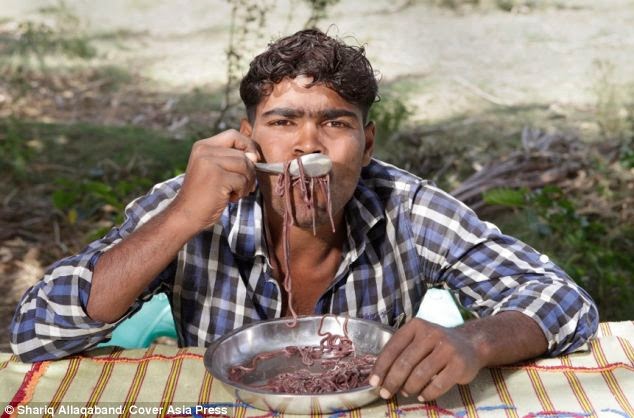 Darwin was right to emphasise the importance of earthworms in the history of the world and that includes the extensive period of pre-human history. It’s a pity they aren't more recognised – and utilised.

[1] Charles Darwin (1881) The Formation of Vegetable Mould, through the action of worms, with observations on their habits. London, John Murray.