The blindness of a Creationist


Philip Henry Gosse, the Nineteenth Century Natural Historian, was one of the pioneers of the craze for parlour aquaria. In addition to popularising aquatic life through his wonderful books, lectures and field courses, he was an acute and enquiring observer of aquatic organisms and his research led to him being appointed a Fellow of the Royal Society.

A visit to South Wales resulted in Tenby: a sea-side holiday [1] that Henry describes as:

..a faithful narrative of how the author was engaged for about six weeks at that pleasant little watering-place.. ..He hopes..that the approbation so kindly bestowed on his former works will be continued to this, and that it may be accepted as another Lesson in the important art of "How and What to Observe"

The former works include A Naturalist's Rambles on the Devonshire Coast, and Tenby follows a similar format, demonstrating Gosse's skill, both as an observer and as a communicator. There was another side to Henry Gosse and, to him, very much the most important. As a member of the Brethren, he had a strong Christian faith and this extended to a belief in the literal truth of The Bible. On the Title Page of Tenby [1] is a quote from Cowper (shown below) that mirrors Henry's view that observation of all creatures leads to our having a sense of wonder in God's Creation. This standpoint was so important to him that he wrote a book, Omphalos [2], to defend it and this was published in 1857, a year after Tenby and two years before Darwin published The Origin of Species. Darwin's great work revolutionised thinking about evolution, but the concept of geological time scales had already been accepted by most, although not by Henry, who believed that all strata, and the fossils that they contained, were created by God some thousands of years ago [2]. Henry Gosse would certainly have been aware of ideas surrounding the evolution of life forms in 1856, even if he didn't agree with them. 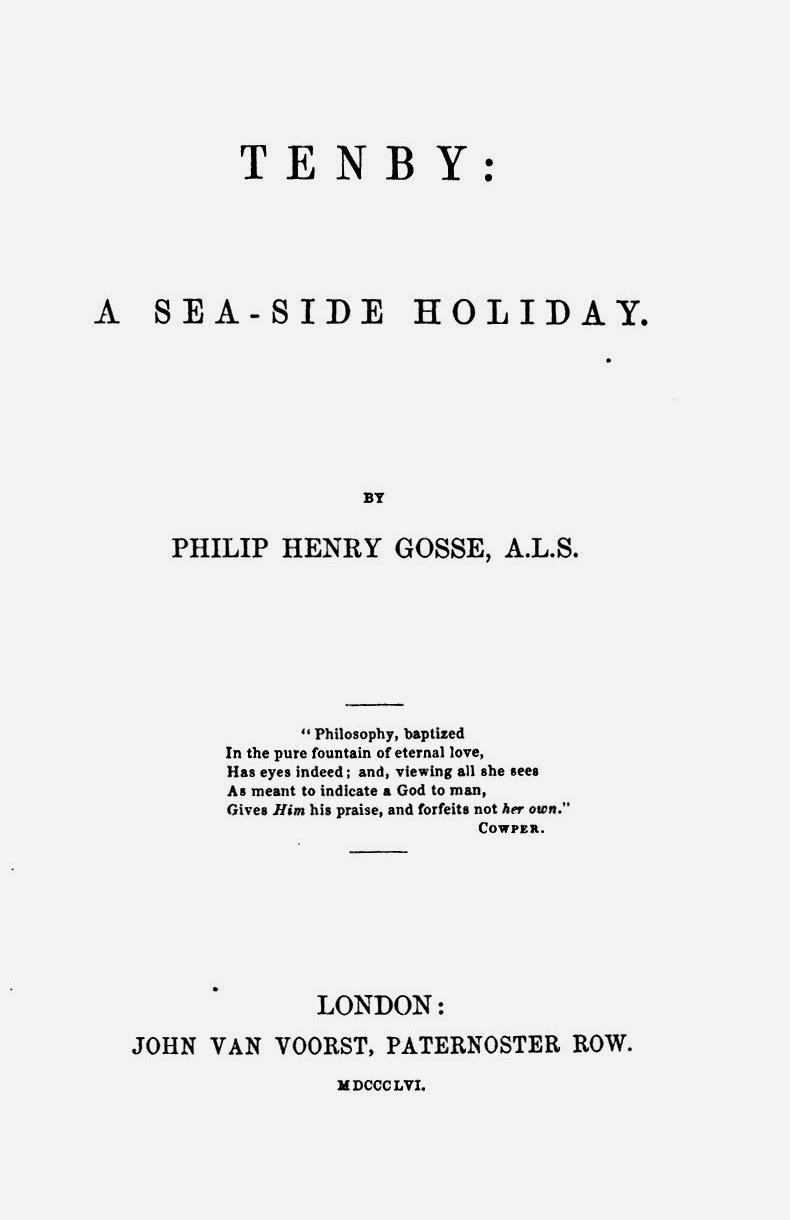 In Tenby, Henry describes an observation that he made on two marine organisms that were placed into fresh water [1]:

The power which some animals have of sustaining with impunity circumstances which are fatal to others closely allied to them, is remarkable. To most marine animals immersion in water is instant death. Some young Crabs in the Megalopa stage which I found in luminous water, and which remained several days alive and well in a bottle of sea-water, died instantaneously on being dropped into a tumbler of fresh water. On the other hand, a specimen of Eurydice pulchra,-one of two that occurred in the same dip,-manifested not the slightest inconvenience at the change, but continued for several days to dart about the vessel, with intervals of motionless, death-like repose on the bottom, and behaved in every respect in a manner identical with that of his fellow that was allowed to remain in his native sea-water.

Henry was observing the effects of osmosis on the crab larvae, with water passing into the body from the weaker medium to the more concentrated body tissues. The result was rapid death, as will be the case with all marine animals having a permeable coating. Eurydice pulchra (see below) is a crustacean that lives in the intertidal zone, buried in sand, and individuals come to the surface and swim when the tide covers them [3]. Having an external skeleton protects them from abrasion from the sand and, as it is impervious to water, it also serves to protect them against changes in salinity and exposure, as might occur after a rain storm, or when they are caught on the surface as the tide goes out. 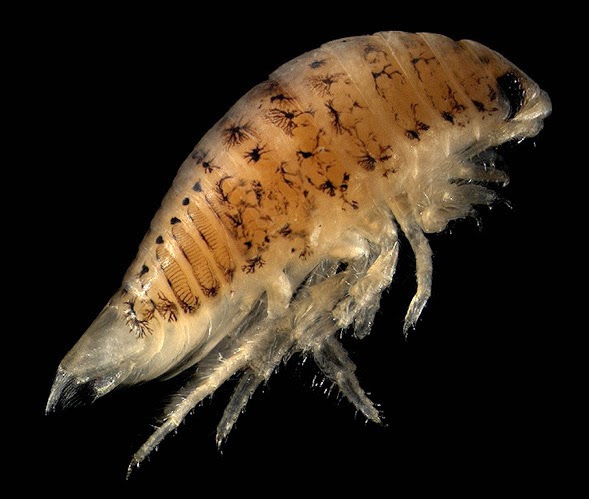 
I wonder what went through Henry Gosse's mind when he was making his observations on E. pulchra. A Natural Historian with an open, and enquiring, approach may have wondered whether it was the presence of a resistant cuticle in ancestral organisms that allowed the colonisation of rivers from the sea by migration from estuaries, something that soft-bodied marine creatures cannot do. Or perhaps the thought would arise that the cuticle of intertidal crustaceans allowed the conquest of land by their ancestors, leading to the insects and the subsequent re-colonisation of fresh waters, where insects are abundant? A present-day Natural Historian accepts that the presence of a resistant cuticle is an example of pre-adaptation, but further questions arise about the marine/fresh water transition? For example, how do eels and salmon survive in fresh water before/after the marine phase of their life cycle? The answer lies in their having resistant coverings, but also efficient kidneys to expel water and, importantly, a coating of slime on permeable surfaces that acts as a barrier [4]. Of course, Henry Gosse, for all his powers of observation, could not ask questions such as these, or, if he did, he had to dismiss them as something mischievous that was sent to tempt him away from his anti-evolutionary stance. He was a great observer, but had the blindness of a Creationist.

There are still some Christians with similar views to those of Henry Gosse, although the majority now accept evolution and a looser interpretation of the Biblical account of Creation. That raises another question: how does one separate the literal from the figurative in The Bible?