Being fooled by Bee Flies


There have been a lot of Bee Flies in our garden in the past few weeks. Their forward-pointing proboscis and hovering skills make them easy to recognise, although I admit that I used to think that they were a rather unusual type of Bumble Bee. The confusion comes from their body shape and covering of hairs, both of which make them resemble Bumble Bees, although they are in the Order Diptera (true flies) not Order Hymenoptera (ants, bees and wasps). 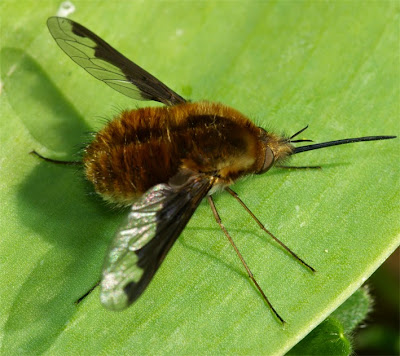 Bee Flies in the genus Bombylius have a world-wide distribution [1], with 278 species being recognised, all with similar life histories and feeding habits [2]. Their larvae are parasitoids (parasites that kill their hosts) of the immature stages of Bumble Bees, and other solitary bees and wasps, that all produce a brood in a nest hole in the ground. Eggs are laid, or flicked into, the hole by the Bee Fly females and hatching larvae migrate to find the larvae of the host and continue development. After pupation, adult Bee Flies emerge to complete the cycle.

Both male and female Bombylius adults feed on nectar, for which their forward-pointing proboscis is well-adapted, and females also feed on pollen, which is required for the development of eggs [2]. In this foraging activity, they are effective pollinators of plants and the only cost to the plant is the production of nectar and the excess pollen that is utilised as food. Interestingly, Boesi et al. [2] write: "Foraging activities of host and parasitoid populations are seasonally (and often daily) synchronized". The resemblance between Bee Flies and their hosts thus extends to their behaviour as well as their appearance.

So, why do Bee Flies look, and behave, like Bumble Bees? Their behaviour brings them into contact with potential hosts and increases the chance of locating their nest holes, while their appearance may prevent attack during egg-laying (although this is speculation). The appearance of Bee Flies might also be explained by Batesian mimicry, deterring predators such as insectivorous birds by resembling other insects with a powerful sting. Although we don't know the explanation, their appearance, and behaviour, evolved by selection of advantageous genetic mutations long before humans first appeared, although that would be disputed by Creationists.

Whatever our views on the origins of living organisms, all humans have a tendency to view Nature from a human perspective. However, we need to be cautious of our anthropocentricity, as our perceptions may be quite different to those of other animals. Perhaps the appearance of Bee Flies is just a result of coincidence rather than the unconscious mimicry of the appearance and behaviour of Bumble Bees? That does seem unlikely, but how are we to know?