I was drawn to a headline in The Independent newspaper: "'Dark matter' not as dark as first thought: Scientists find it interacts with forces other than just gravity" [1]. The scientists referred to in the article were a team of 23 headed by Richard Massey, and their findings were published in the Monthly Notices of the Royal Astronomical Society [2]. Although I have little understanding of astrophysics, I was interested in the closing sentence of their Conclusions section where, having described their findings of the "possible stripping or deceleration of dark matter associated with the infalling galaxies [in the 10kpc core of Abell 3827]", they write:

Detailed hydrodynamical simulations of galaxy infall, incorporating dark matter physics beyond the standard model, are needed to predict its behaviour within a cluster environment, and to more accurately interpret high-precision observations.

I take this to mean that our interpretation of dark matter needs to be re-examined; so what is our current view of this matter and what is a 10kpc core? As a kpc (kiloparsec) is approximately 3.26 light years, the core of the infalling galaxies observed by Massey et al. (and shown below in an illustration from the BBC [3]) is over 300,000,000,000,000,000 km across, if my arithmetic is correct. It is in this minute part of the Universe that the new observations have been made; dark matter making up, in total, about 27% of the material in space, with everything that we can observe (planets, stars, galaxies, etc.) making up less than 5% of the total. The rest is dark energy [4]. 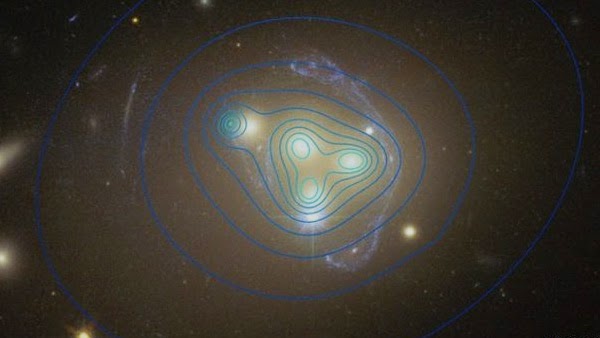 To define dark energy, I quote from the NASA site [4]:

We know how much dark energy there is because we know how it affects the Universe's expansion. Other than that it is a complete mystery.

Do we have a better understanding of dark matter? Again, a quote from the NASA site is helpful:

We are much more certain what dark matter is not than we are what it is. First, it is dark, meaning that it is not in the form of stars and planets that we see.. ..Second, it is not in the form of dark clouds of normal matter, matter made up of particles called baryons. We know this because we would be able to detect baryonic clouds by their absorption of radiation passing through them. Third, dark matter is not antimatter, because we do not see the unique gamma rays that are produced when antimatter annihilates with matter.

We can therefore conclude that the Universe is vast and beyond any scale that we can comprehend and that it is made up of a fraction of matter that we can measure. The rest is explained by our powers of imagination and the predictions made by experts in mathematics and physics.

Recently, I took a course in Cosmology to try and get an understanding of what we know about the Universe and its origins. The course was taught well, but I found myself hopelessly lost with the scales involved and with the levels of imagination required. Our existing knowledge has been gained from Earth-bound observations and, recently, those from satellites and devices that record signals over mind-boggling distances. All the interpretation of these observations has necessarily been Earth-bound and based on human analytical skills, aided by the high-powered computers we have devised. Given the scale of the Universe, these tools seem inadequate, but it is a human characteristic that we feel we can eventually explain all that is currently unexplained.

During the Cosmology course, I also thought about another model that seems equally plausible – that everything was designed by a theistic force. Just as I was overwhelmed by the study of the Universe from Earth, so I was overwhelmed by the idea that a God that created the Universe chose an infinitesimally small planet on which to locate humans that were then given unique powers of reasoning and the belief that, given time, they could understand everything. It is tempting to accept that the idea of such a theistic force is, in turn, a result of human imagination.

Will we ever understand the Universe? Almost certainly not without the development of a "better" mathematics (of which our wonderfully powerful mathematics is a subset), but now I'm veering off into science fiction.