Flowering plants (angiosperms) began to dominate the Earth’s vegetation about 100 million years ago and, while other, more primitive, plants continue to be abundant, the present diversity of angiosperms is remarkable. When thinking of flowering plants, our minds may turn to beautiful garden borders, meadows and occasional clumps of flowers in woods and verges. Yet angiosperms have also invaded water bodies; although this is really a re-invasion, as land plant evolved from distant aquatic ancestors.

Anyone visiting a stream draining from chalk strata is impressed by the amount of vegetation growing over its bed and invading from the margins. There are many microscopic algae that are only visible under a microscope, but two common flowering plants often dominate: water cress and water crowfoot. Of the two, water cress grows into the stream from the banks and can extend right across narrow channels, a habit that has been exploited in the development of commercial cress beds fed by water from chalk streams. The bulk of the plant remains above the water surface and this contrasts with water crowfoot, where plants grow in dense stands, rooted into the bed of the stream and affecting its flow pattern. Water crowfoot is a relative of the buttercup and its flowers are very similar in structure, although they are white, rather than yellow, in colour (see below). It is only during flowering that we see water crowfoot above the water surface, although stands can become so dense that, at times of low flow in summer, they may be exposed to the air. They are well adapted to life in flowing water. The drag on the mass of leaves is counteracted by an effective rhizome and root system that ensures anchorage on the stream bed and the plants engineer the stream around them. Stands provide an obstruction to flow that creates channels of faster-moving water between plants and this serves not only to keep the substratum clear of sediment, but the growing leaves are also unaffected by deposition and can thus photosynthesise efficiently. In contrast, the base of the plant is an area of sediment build-up and this includes much organic matter [1] that serves as a source of nutrients - another way in which the plants engineer their habitat to their advantage. 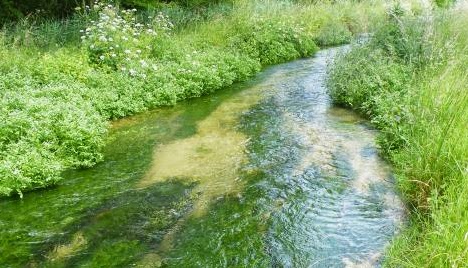 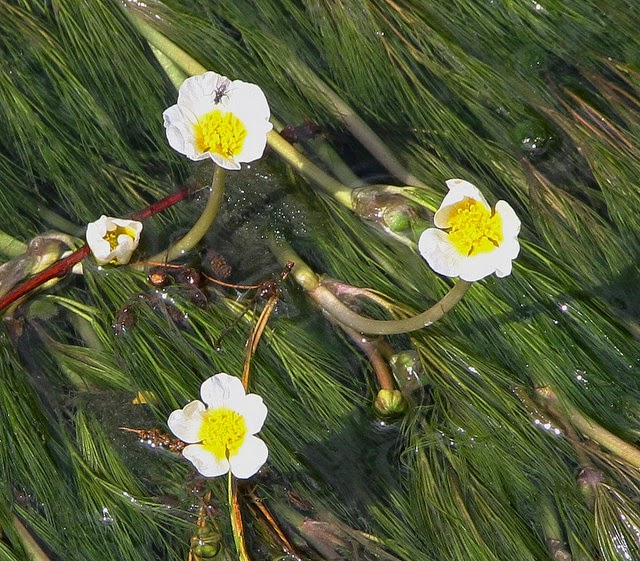 Although water cress and water crowfoot are both aquatic plants, with the former fitting the definition less easily than the latter, seagrasses are truly aquatic. As their name suggests, these plants are marine, spending the whole of their life cycle under water. Seagrasses have a world-wide distribution and are perhaps most commonly associated with tropical seas and, especially, reefs, where the water is clear and there is good light penetration to the substratum, allowing efficient photosynthesis. Nutrients needed for growth are taken up by roots and stored in rhizomes that also serve to stabilise soft sediments. Interestingly, seagrasses are more closely related to lilies and ginger than to grasses [2] and their colonisation of soft sediments results in large "grassy" meadows when conditions for their growth are favourable. These are then grazed upon by many animals and they also form shelter for many other organisms and a substratum for yet more.

Seagrasses are also found commonly in shallow temperate seas that have sufficient transparency to allow the plants to grow. As I grew up by the sea in Torbay, and had a love of Natural History, I knew about seagrasses, but had no idea that there were meadows of the plants so close to some of my collecting spots. Nor did I know that seagrasses were flowering plants. Like many, I thought that seaweeds alone were the dominant large marine plants around coasts.

Two of my favourite places to visit in Torbay were Elbury [Elberry] Cove and the rocks below Corbyn’s Head, where I spent time collecting marine creatures to keep in aquarium tanks. [3] Both locations now have interesting and informative signs (see below) describing the importance and susceptibility to damage by boats etc. of the seagrass meadows just offshore. 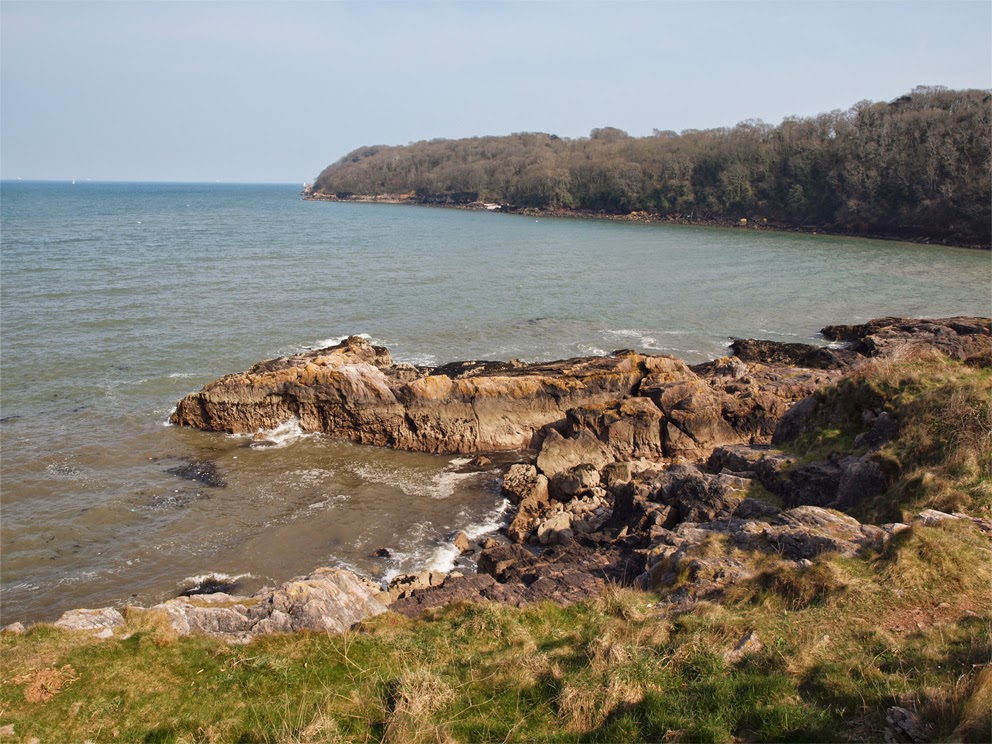 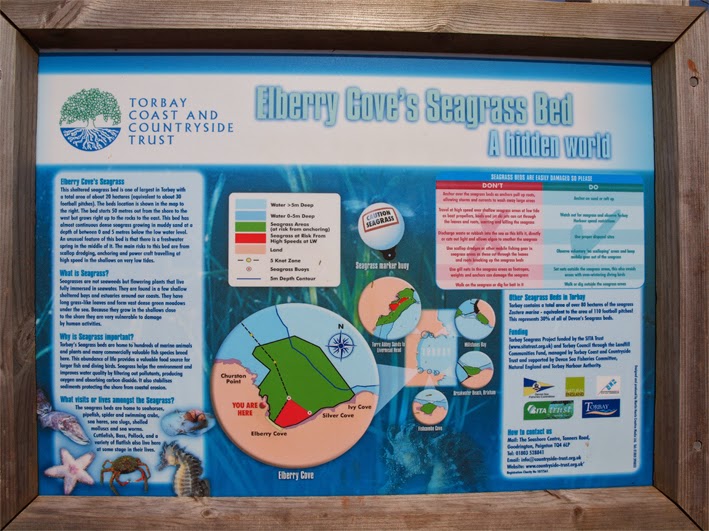 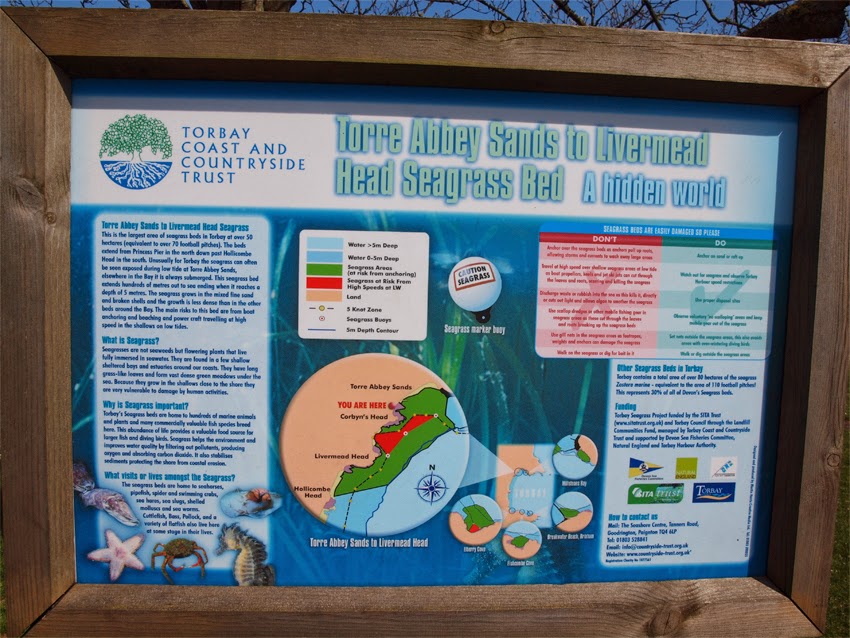 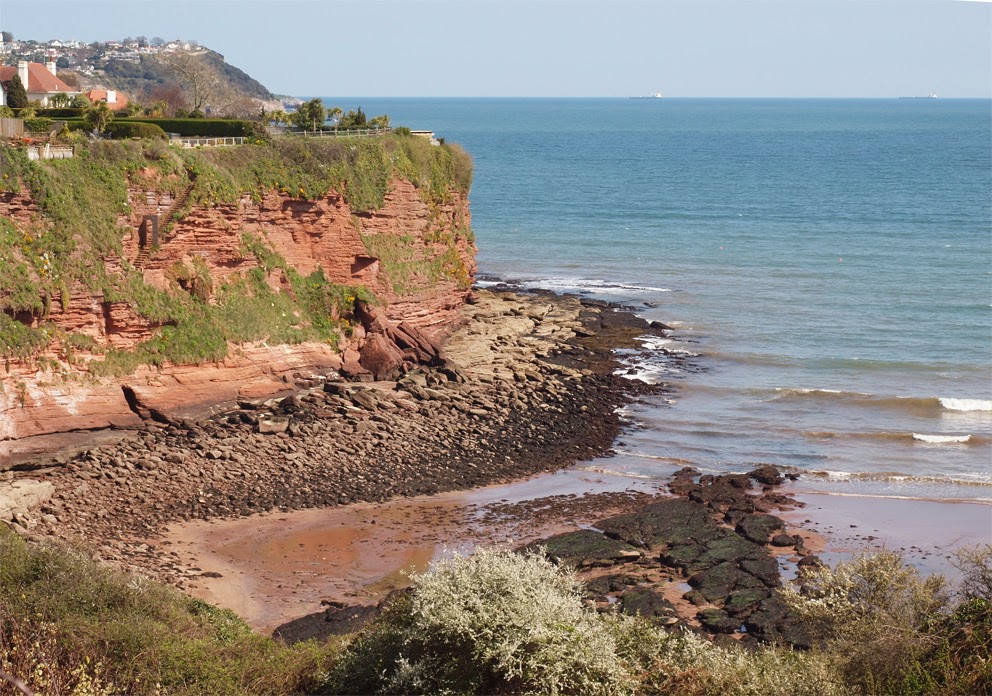 It is likely that Zostera is one of the seagrasses and Henry Gosse mentions this plant when describing the results of dredging a little further up the coast:

Now we have made our offing, and can look well into Teignmouth Harbour, the bluff point of the Ness some four miles distant, scarcely definable now against the land. We pull down sails, set her head for the Orestone Rock [just off Torbay], and drift with the tide. The dredge is hove overboard, paying out some forty fathoms of line, for we have about twelve or fourteen fathoms’ water here, with a nice rough, rubbly bottom, over which, as we hold the line in hand, we feel the iron lip of the dredge grate and rumble, without catches or jumps. Now and then, for a brief space, it goes smoothly, and the hand feels nothing; that is when a patch of sand is crossed, or a bed of zostera, or close-growing sea-weeds, each a good variation for yielding. [4]

As Gosse was a devout Creationist, the presence of flowering plants in soft sediments around marine coasts would be another example of the extraordinary events of the six days in which all living things - and all fossil ones - came into existence. [5] To those of us who cannot share such a view, the presence of flowering seagrasses under water is another example of the extraordinary powers of evolution.


In terrestrial habitats, the fertilisation of ova by pollen is aided by insects, wind or other agents and there are a diverse range of adaptations to ensure that fertilisation is achieved - by evolving nectar and/or scent to attract insects, by evolving elaborate colour patterns that are attractive, by producing pollen in enormous quantities, etc. - yet flowers are retained by seagrasses where neither insects or wind can be involved in pollination. Seagrass plants bear both male and female flowers and the pollen from male flowers is released into the water and thus wafts around the plants. The use of water for fertilisation is, of course, extremely common in many marine organisms, including seaweeds and many animals, and that makes underwater flowers seem less unlikely than on first consideration. Natural History is full of such discoveries and one is always learning something new. That’s the satisfaction of it - that, and the sense of wonder at just what can evolve over millions of years and millions of generations. 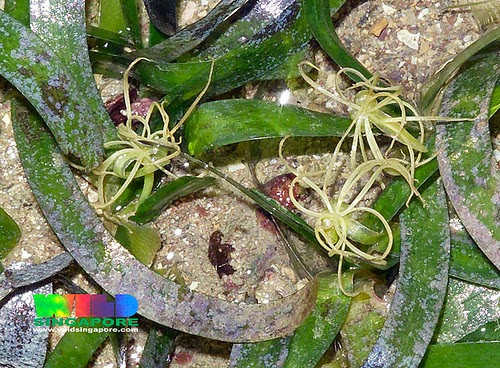