Shells, floats and an interesting association


I grew up by the sea and always enjoyed walking on local beaches looking for shells washed up by the tide. There were many shell fragments, especially of cockles that must have grown in their millions just offshore, but also a wide variety of whole shells, especially those of snails. I continued to enjoy beachcombing and, while on a family holiday in Jersey, found an excellent beach, dominated by shells of the flat periwinkles Littorina obtusata and L. mariae. [1] Some were bright yellow, others orange, white, or of a reddish hue. We collected as many of the shells as we could and, more than twenty years later, they are still exhibited in a glass jar in our bathroom. 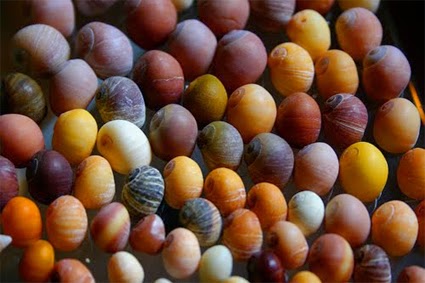 Occasionally, violet shells from the snail Janthina are washed up on beaches, especially after long periods of strong winds. They are similar in form to those I had collected in Jersey, but they have less strengthening than the Littorina shells, which need to be strong to withstand the erosive action of the water, and suspended mineral particles, over the shores on which the snails live. Can we assume, therefore, that Janthina exists in a less erosive habitat? Indeed it does - the snails live at the surface of oceans, attached to a float of bubbles. 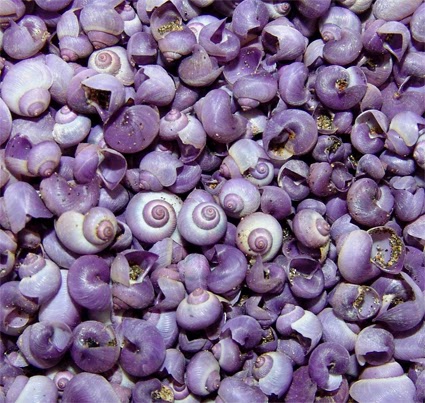 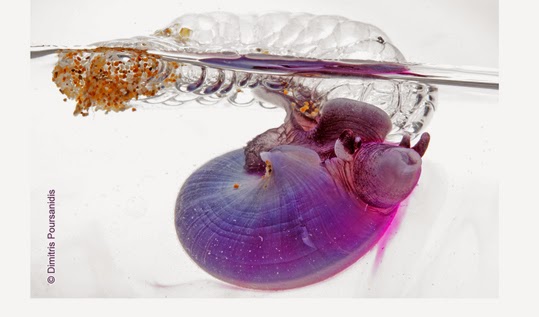 In July and August 1954, there were sustained, strong westerly winds in Great Britain and Ireland and several people reported finding large numbers of Janthina shells on exposed beaches This prompted Dr Douglas P. Wilson of the Marine Biological Association to write a letter to The Times to ask readers for more information about sightings. Reports came in from many locations and, among all the shells, there were a few living specimens. These offered the scope for investigations of the formation of the float, adding to the information acquired by earlier investigators. 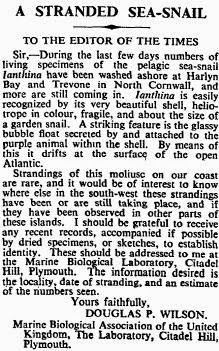 Among the first to make observations was Reynell Coates, who, in 1825, published a description of the float. Coates qualified as a medical doctor in Philadelphia and then set sail as a ship’s surgeon on a voyage to the East Indies. He was very interested in Natural History and took samples of organisms from the surrounding water (presumably when becalmed, or unable to continue the passage - the journey terminated at Kolkata after the outbreak of the Burmese War [2]). This is what he wrote about some specimens of Janthina:

Individuals being placed in a tumbler of brine, and a portion of the float being removed by the scissors, the animal very soon commenced supplying the deficiency in the following manner: the foot was advanced upon the remaining vesicles, until about two-thirds of the member rose above the surface of the water; it was then expanded to the uttermost, and thrown back upon the water.. ..it was contracted at the edges, and formed into the shape of a hood, enclosing a globule of air, which was slowly applied to the extremity of the float. A vibratory movement could now be perceived throughout the foot, and when it was again thrown back to renew the process, the globule was found in its newly constructed envelope. [3]

Wilson’s  description of float formation in Janthina included these observations:

Sometimes the new bubble fails to be attached and floats away as a tiny glassy sphere.. ..The completed float is firm between the fingers, springy and dry - it is not in any sense sticky. [4]

Although the bubbles are surrounded by mucus secreted from glands in the snail’s foot, there are clearly components of this secretion (proteins?) that, after dehydration of the mucus mass, form a solid coating for the trapped bubbles. This ensures that the float is near-permanent, although older pieces break off and need to be replaced. [4] To say that the float is important for the snail is an understatement as, specimens of Janthina that sink into the water column cannot regain the surface. [4]

Janthina is a predator and feeds on other members of the floating community at the air-water interface. It is especially associated with Velella (the “by-the-wind sailor”) [3], and both are blown ashore in masses. Velella is a colonial relative of jellyfish, with polyps attached to a secreted, flattened float that has a sail rising from it (see below), allowing the colony to be transported by wind. The polyps use stinging cells to capture small creatures from within the water column, such as invertebrates and small fish. Wilson quotes Mr Peter David in describing the manner in which Velella is preyed upon by Janthina, the snail cutting out semicircular pieces of the float and attached polyps “in much the same way as a caterpillar does on the edge of a leaf.” [4] 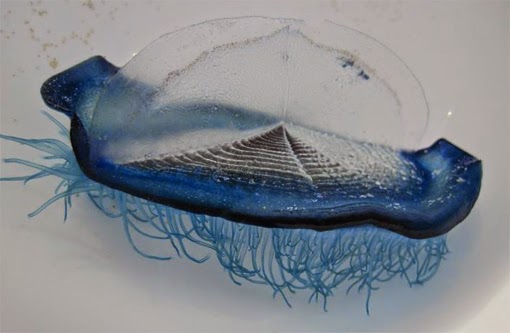 Gastropod snails, like Littorina and Janthina, have very similar body plans and it is relatively easy to see how the latter evolved from a shore-dwelling ancestor, but how did it develop an ocean-going existence? Observation of pond snails shows that some individuals move across the underside of the water surface while the foot is held in the surface film and, to these snails, the interface is like a solid surface. [5] They move here as they do over the substratum, using muscular contractions of the foot, and feed as they go. A characteristic of pond snails is their relatively thin shell, as strengthening calcium salts are not as available in fresh waters as they are in the sea. It is likely that the ancestral Janthina did not strengthen the shell in the way that Littorina does and that it moved under surface films as well as over the substratum, just like some pond snails. In time, the mucus used for lubrication and attachment during crawling was used to coat bubbles formed by the foot and this resulted in the development of the float. They then lost the power of locomotion, or it was highly reduced, and their feeding changed from scraping materials from surfaces to the removal of sections of prey such as Velella, into which they had drifted, or which had been blown towards them.

How Velella evolved its current form is a mystery. There are various theories on how gastropod molluscs evolved from their ancestral molluscan form, but how did the colony of polyps develop, complete with a float to which they were attached? Velella has many sedentary colonial relatives (members of the Cnidaria), but how did life at the ocean surface begin - and what were the origins of the sail?

[3] Reynell Coates (1825) Remarks on the floating apparatus, and other peculiarities, of the genus JANTHINA. Journal of the Academy of Natural Sciences of Philadelphia 4: 356-360.

[4] Douglas P. Wilson and M. Alison Wilson (1956) A contribution to the biology of Ianthina janthina (L.). Journal of the Marine Biological Association of the United Kingdom 35: 291-305.