If an insect falls from a plant it is rarely damaged as it has a low momentum and its body creates considerable friction drag as it falls. The force of the impact is reduced as a result and the insect then usually quickly scurries away.

Some larger animals are also adept at surviving falls and the offspring of tree-nesting ducks drop to the ground, being cushioned by leaf litter, by their down-covered bodies and by some flapping of their tiny wings. [1] Adult birds have little problem as they can fly down and then use sweeping movements of their wings to produce “reverse thrust” and thus decelerate gently, using the downward displacement of air to effect an easy landing.

Cats leap from trees, fences and walls, and their landing is cushioned by the shock-absorbing properties of the limbs, but surviving a fall from considerable height is much less likely, as maximum acceleration then results in high momentum. In arboreal mammals, swinging from the arms is a common feature and, together with the grip of the hands (and feet - and even tail in some monkeys) ensures that catastrophic falls are avoided. Yet some animals are able to leap from high in one tree to the base of a nearby tree while suffering no damage, thus moving more rapidly from one location to another than could be achieved over the ground. Two well-known examples of these “fliers” are tree frogs (in the genus Rhacophorus) and flying squirrels (genus Glaucomys).

Tree frogs spend their adult life in forest canopies, but, being amphibians, they must find water in which to breed. Some species use small rain pools in the axils of leaves or in tree holes, while the females of some Rhacophorus build nests of foam attached to tree branches overhanging ponds, the nest being created by rapid movements of the hind limbs (akin to whisking) in secretions made by the frog. Eggs are laid within this mass and these are fertilised by male frogs, hatching tadpoles then emerging into the foam and dropping into the water below to complete larval life. Froglets leave the pond and then climb adjacent trees, remaining in the canopy for the rest of their lives. Although they have pads on their toes to provide excellent adhesion to surfaces, adult frogs retain the webbed feet of the ancestral forms, even though they are not used for swimming. The webs are especially well-developed in some species and they act as parachutes to slow down the descent when frogs move from one tree to another, or from one branch to a lower one. 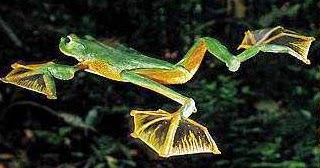 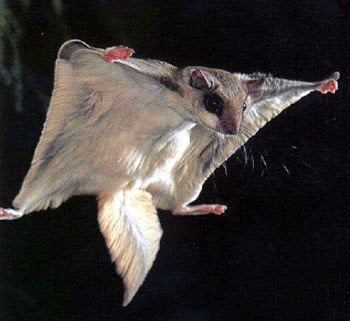 Flying squirrels also use parachutes and these are formed from loose skin (termed a patagium), that runs between the fore and hind limbs, and between the fore limbs and the head. I was fortunate to be able to watch Glaucomys parachuting when visiting Dr Joe Merritt at the Powdermill Biological Station of the Carnegie Museum of Natural History in Pennsylvania. Dr Merritt had been studying these mammals for several years and laid out live traps so that we could then see the squirrels close up. Traps containing animals were collected and each trap was emptied into a cloth bag. In the photograph below you’ll see me (with Dr Merritt on the right and the late Prof. Björn Malmqvist on the left) at the moment when a captured squirrel bit me on the hand. I was told to take a firm grip of the skin over the neck of the animal, but it was still able to turn its head easily to defend itself from such unpleasantness. It was a lesson for me in just how much skin that flying squirrels possess. I let go immediately and the squirrel ran up a nearby tree, and then made a wonderful gliding flight before climbing rapidly, making another flight and then disappearing. The parachute of loose skin was very effective in slowing its descent, the squirrel covering tens of metres and with good directional control provided by the tail and by changing the profile of the patagium. It was most impressive and, in one way, I’m pleased that I was bitten. 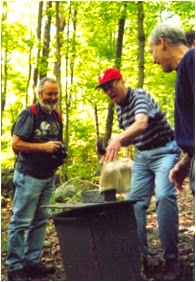 I was reminded of this incident when reading a quote from Jeb Corliss in The Independent:

At the beginning, there were probably only very few squirrels that even contemplated flying from tree to tree. The other squirrels thought they were crazy. I imagine that hundreds of them died in the attempt. But then, in the end, one of them managed it. Now that, to me, is evolution. And now we are evolving, through technology and through skill. I liken what we’re doing in proximity flying to the first animals that left the water. We are evolving and growing. And becoming stronger. What else is the purpose of life? [2]

Not quite the way I would express the likely evolution of parachuting in flying squirrels, but Jeb Corliss is an expert wingsuit flyer, not a Biologist. Of course, it is impossible for humans to control their descent to the land without an external parachute and the earliest examples have been transformed into steerable ‘chutes that enable precise landings. As Jeb points out, wingsuit flying has close similarities to the flight of Glaucomys, with webbing between the arms, legs and body, analogous to the patagium of flying squirrels, providing steerable flight. Proximity flying capitalises on this level of control to allow fliers to pass very close to objects, or the ground, while making their descent (see the video clip at the end of this post). 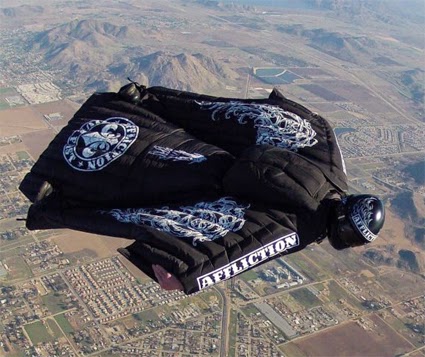 Whereas Rhacophorus and Glaucomys have both evolved changed body forms to enable them to move from tree to tree for various reasons, human use of wingsuits is solely for pleasure. The excitement comes from exposure to danger, a sense of freedom, and the thrill of depending on a skill where a small mistake can have disastrous results. Some of us are drawn to such activities and proximity flying is addictive, even though the number of fatalities is large relative to the number of those who fly. Wingsuit fliers, and others involved in the most extreme sports, are only too well aware of the dangers and most are not afraid of death, recognising that it is possible that flights can go very wrong, even after meticulous preparation. They feel very alive as a result, and their approach to death contrasts markedly with the fear of life ending that seems to haunt others within the human population - and which is the basis of many religions. While animals such as Rhacophorus and Glaucomys cannot be aware of danger in the same way as humans, I wonder if  they get a thrill from flying?