Last week, I noticed Pipistrelle Bats (below) flying for the first time this year. It took me back to when our children were young and we used to stand on the patio at the rear of our house in Berkhamsted on summer evenings and watch Pipistrelles. We had the idea of counting how many there were, and where they were flying, but it was not possible to get accurate answers, such was the speedy flight of the bats, combined with their rapid changes of direction. They were clearly hunting over the garden (that contained a large pond at the time), so I would imagine that dancing midges and similar small insects were the diet on those evenings. We never did find out where they were roosting during the day, but it cannot have been far away. 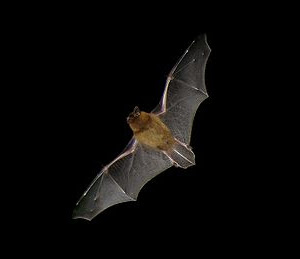 While watching, we talked together about bat biology. We know that bat’s wings are formed by skin covering the extended finger bones and that flapping of the wings, and their orientation, is controlled by muscles that moved the arms and hands of their ancient ancestors. Anyone watching bats is aware that they are expert fliers and, although they have reasonably good eyesight, they use high-pitched pulses of sound for navigation and to locate prey organisms. I remember being able to hear the pulses when I was a child, but that was many years ago. Fortunately, we can all listen in on their high-pitched calls by using bat detectors that consist of an antenna coupled to a box containing equipment that makes the calls audible. I first came across these detectors when I was an undergraduate student and we went to a lake on campus to see how many different types of bats we could identify from their characteristic pattern of pulses. My next acquaintance with these detectors was many years later during a visit to Arlington Court in North Devon, where my wife and daughter joined me and a group of enthusiasts in seeking out bats on the estate. We walked in darkness and identified several species, being informed about each, and the use of their regular flight paths, by our guide. It was all fascinating, one’s sense of wonder being increased by the darkness, for there were no lights nearby (and it was matter of luck whether one stepped into a cow pat or two – we also remember that bit of our walk).

Arlington Court itself is an old mansion with a roost of Lesser Horseshoe Bats (above) that can be viewed by means of a video link. We were able to see offspring being suckled and then “hung up” by their mothers before the adults flew off to start hunting for insects. A visit to Arlington Court is highly recommended and it reminded us that these remarkable animals are mammals, just as we are. All this is an activity for spring, summer and autumn as, in temperate countries, many types of bats hibernate to overcome shortages of food insects and the cold temperatures of winter.

Bats are animals with a range of sophisticated adaptations – flight, echolocation for navigation and feeding, roosting, hibernation – and all have evolved from earlier forms. Of course, if you are a Creationist you will have a different explanation and miss out on some fascinating theorising as to how such adaptations came about.

Unfortunately, not all people feel positive about bats. For many, they are associated with unpleasantness and they feature in many stories about witches – look at the illustrations that appear in shops during the commercialised festival of Halloween and you will see outlines of bats accompanying witches riding broomsticks. This association with the “dark world” stems from the crepuscular and nocturnal habits of bats, and our nervousness about what happens during darkness – a “fear of the night” and anxiety about the possible presence of evil spirits. There is also something about the rapid flight of bats that some find disturbing and one belief is that they can become entangled in hair. Professor Gary McCracken discusses folklore in interesting articles in BATS magazine 1,2 suggesting that the idea of bats becoming tangled in hair results from their flying close to the heads of people who act as swarm markers for insects like dancing midges. A further prominent feature of folklore is that bat blood, or other extracts from the animals, cure eye diseases; arising, no doubt, from the ability of bats to be active in darkness. This folklore is nonsense, of course, but some bats do feed on blood and these create a fear that has been associated with many other bats that do not have this habit.

There are three types of Vampire Bat and one feeds on mammal blood, while the other two predominantly attack birds. They all have very sharp teeth that produce a wound from which blood is lapped up by the tongue, flow being maintained by the use of anticoagulants in the saliva. Vampire Bats, and their habits, have entered popular culture in the writings of Natural Historians like Charles Waterton, whose books were read avidly in the Nineteenth Century and his descriptions of Vampire Bats were repeated, without qualification, in the chapter Edith Sitwell devoted to Waterton in her well-known book The English Eccentrics. 3 The following extracts come from Waterton’s Wanderings in South America and appear in his Third and Fourth Journeys:

As there was a free entrance and exit to the vampire in the loft where I slept, I had many a fine opportunity of paying attention to this nocturnal surgeon. He did not always live on blood. When the moon shone bright, and the fruit of the banana tree was ripe, I could see him approach and eat it. He would also bring into the loft, from the forest, a green round fruit, something like the wild guava, and about the size of a nutmeg.. ..The vampire, in general, measures about twenty-six inches from wing to wing extended, though I once killed one which measured thirty-two inches.. ..I had often wished to have been once sucked by the vampire, in order that I might have it in my power to say it had really happened to me. There can be no pain in the operation, for the patient is always asleep when the vampire is sucking him; and as for the loss of a few ounces of blood, that would be a trifle in the long run. Many a night have I slept with my foot out of the hammock to tempt this winged surgeon, expecting that he would be there, but it was all in vain; the vampire never sucked me and I could never account for his not doing so, for we were inhabitants of the same loft for months together. 4

The teeth of the vampire are very sharp, and not like those of the rat. If it be that he inflicts the wounds with his teeth (and he seems to have no other instruments) one would suppose that the acuteness of the pain would cause the person who is sucked to awake. We are in darkness in this matter, and I know of no means by which one might be enabled to throw light upon it. It is to be hoped that some future wanderer through the wilds of Guiana will be more fortunate than I have been, and catch this nocturnal depredator in the act. 5

The descriptions of feeding by Vampire Bats are accurate and Waterton was impressed by the action of the anticoagulants, although he had no knowledge of their existence. He was also correct in stating that Vampire Bats often feed barely noticed by their “victims” and their success in being able to feed freely is impressive. However, it is no surprise that Charles Waterton was not attacked by the bats from his loft. From his description, it is clear that these were Fruit Bats, as Vampire Bats feed exclusively on blood and are smaller than Waterton's co-habitants.

The more one looks at bats, the more one is amazed at their adaptations. They vary in size from Pipistrelles to large Fruit Bats and yet all have the same basic biology, with a very successful body plan and physiology. It is a pity that some people view them with a quite unnecessary sense of fear.