I was delighted to give the 15th Annual Robert Grant Lecture on the topic Zoology and mythology: looking at angels, fairies and dragons. Using a superficially light-hearted approach, I examined the form and function of these three types of creatures from a zoologist’s perspective, asking such questions as: What type of wings did each creature have? How were the wings anchored in the skeleton? How were the wings flapped (if they were flapped)? How were the flight muscles located in the body? The lecture, while based on serious anatomical principles, was really an investigation of the way we accept images showing angels with bird wings; fairies with insect wings; and dragons with wings like those of bats. It was a theme I had developed in an earlier essay, 1 where I also discussed putti, such a feature of Italian Renaissance art. These human infants have tiny bird wings that enable them to fly above the subject(s) shown in paintings, gather on the ground near them, or look down from a high point in a room or building. To save time, I omitted putti from the Grant Lecture and I’d like to return to them now in a comparison with bumblebees; animals that also have small wings for the size of their bodies. 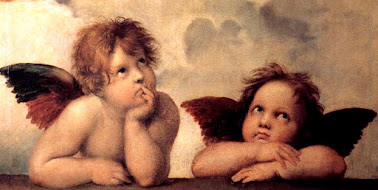 Bumblebees only fly when their flight muscles are sufficiently warmed up and, on cold mornings, this is achieved by “sunbathing” and, importantly, by vibrating the flight muscles without flapping the wings. 2 This is possible because the muscles used to power flapping flight are not attached to the wing, but to the walls of the thorax, as is typical in advanced insects. I am not going to give details of the flight mechanism here and, if you are puzzled by the idea of indirect flight muscles, you will be astonished by the role played by muscles and skeletal structures that allow the wings to be rotated and moved forwards and backwards, all these being needed to generate lift and propulsion.

We know much of the flight mechanism of insects as we can study it directly and also make many measurements using sophisticated contemporary techniques. It is only possible to speculate on how putti fly, although their naked, often chubby bodies indicate that the generation of sufficient temperature is not a problem. However, the size of their wings means that large volumes of air need to be displaced rapidly and this can only be achieved by exceedingly rapid wing beats. So rapid that the tip of the wing will move at supersonic speed and feathers would likely be ripped to pieces. We must conclude therefore that putti, like angels, fairies and dragons cannot fly using their wings and that the images we have of these creatures are inventions. However, I was surprised to find this image when searching on the internet:

Was this the wing of a putto mounted on a tailor’s dummy, complete with wiring involved in the flight mechanism? I hope you will excuse my little piece of fun in asking this question as this is indeed a bird wing, but used in the unique jewellery of Julia de Ville (http://www.juliadeville.com).

So, why did I write this blog post? Partly because I enjoy whimsy and hope that readers do too, and partly to highlight that we can believe some very strange things about the appearance of angels, fairies, dragons - and even putti. We do this while largely ignoring the astonishing variety of form and function of the real creatures that are all around us. Just looking at bumblebee flight fills one with amazement at what has occurred in the evolution of these insects, without even considering their mouthparts, vision, sense organs, and many other aspects of their biology. It fills one with awe, whether one is an atheist or of religious persuasion