Looking at the countryside from railway carriages


In the Preface of A Naturalist’s Rambles on the Devonshire Coast, the Victorian Natural Historian Philip Henry Gosse wrote: 1

..I have not made a book of systematic zoology; nor a book of mere zoology of any sort. I venture to ask your companionship, courteous reader, in my Rambles over field and down in the fresh dewy morning; I ask you to listen with me to the carol of the lark, and the hum of the wild bee; I ask you to stand with me at the edge of the precipice and mark the glories of the setting sun; to watch with me the mantling tide as it rolls inward, and roars among the hollow caves; I ask you to share with me the delightful emotions which the contemplation of unbounded beauty and beneficence ever calls up in the cultivated mind.

This is typical both of Henry Gosse’s writing style and his approach to Natural History. In A Naturalist’s Rambles on the Devonshire Coast he gives detailed descriptions of many marine organisms, but always in the wider context of habitat and environment.

One of the pleasures of studying Natural History is that it allows us to appreciate the huge variety of living things at scales from the microscopic to that of landscapes. Although one cannot see the creatures in a pond, one knows the types that are likely to live there, their habits and biology. Added to that is an understanding of how the pond ecosystem functions, with the energy from organic matter passing through micro-organisms, to plants and animals of all sizes. In the same way, background knowledge enhances one’s appreciation of coasts, woods, hedgerows or any other natural features of the landscape, whether one is observing on foot or using some form of transport. 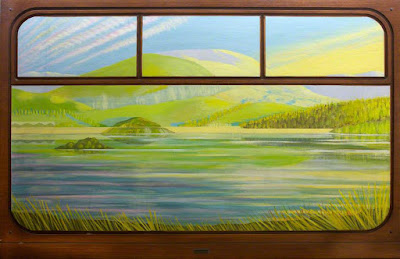 I have always enjoyed travelling by train and my journeys are rarely spent reading or chatting, although the former was my chosen approach during years of commuting to work in London. For me, railway journeys have always been an opportunity to gaze out of the carriage window and observe the countryside we passed through. I’ve always found that the best view is provided when travelling First Class and that, perhaps, results from well-placed seats and large windows that give a wide field of vision. To make it affordable, travelling First Class now requires advance booking and gone are the days when trains were made up of miscellaneous carriages some of which had First Class compartments labelled as being available for the use of Second Class passengers (see the sticker below). It was always worth scanning along the carriages of those trains to see if one’s luck was in. 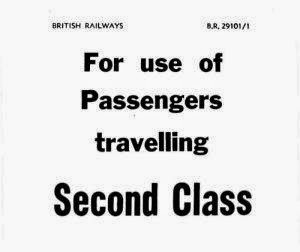 Henry Gosse preferred to travel First Class on trains 2 and, in his time, during the expansion of the railways, this would have been an expensive option. It is not recorded whether he used to gaze from the window, but I’m sure that he did, especially as he was naturally shy, although his occasional outbursts of religious evangelism also had the unintentional effect of buying the silence of other passengers. As the brilliant biographer Ann Thwaite wrote of a journey he made with his son, Edmund: 2

They travelled first class, as Henry always did. At Newton Abbot a young woman joined them and a label on her luggage announced her to be ‘Miss Christabel Coleridge’. Edmund was consumed with curiosity, wondering if ‘she was of the poet’s family’. No one spoke a word and she got out at Exeter, where her place was taken by an elderly gentleman. The two men started talking and the boy found himself listening to the sort of conversation he had heard so many times as a small boy travelling with his mother. Now his feelings were different. Without much preliminary, Henry Gosse ‘advanced the Cross of Christ. He eagerly enquired whether our new acquaintance had found peace on the bosom of his Saviour’. The answer was curt. The elderly gentleman withdrew to his corner of the carriage, buried himself in a book and took no further notice of them.

It is not surprising that there was no communication with ‘Miss Coleridge’ on this journey, as the railway line between Newton Abbot and Exeter passes right along the coast and then up the muddy Exe estuary and it is a brilliant stretch for a Natural Historian to make observations of wildlife. Trains in Gosse’s time moved more slowly than those of today, but their sudden and noisy appearance was sure to disturb many birds and other animals and that made them easier to see.

As a boy, I used to enjoy travelling on the branch lines of Devonshire using Holiday Runabout tickets that allowed unlimited travel for a week on all lines within a defined area. As I lived by the sea, I headed for the country and also stopped off to look at some of the small towns and villages that I had not visited previously. Trains on branch lines moved at a gentle pace and one thus felt more integrated with the landscape and the “rural idyll”. There was always much to see on these train journeys, but this pleasure cannot be enjoyed nearly as much today, for most of the lines are now closed, although some track beds remain as cycle tracks. I empathise with the sentiments made by John Betjeman in a BBC Radio broadcast of 10th March 1940, a time when the peaceful country railways must have seemed havens from bad news: 3

Roads are determined by boundaries of estates and by villages and other roads; they are shut in by hedges, peppered with new villas, garish with tin signs, noisy with roadhouses. A town spreads out along its roads for miles, leaving the country in the fields at the back that you don’t see.. ..railways are built regardless of natural boundaries and from the height of an embankment we can see the country undisturbed, as one who walks along an open footpath through a field.. ..Railways were built to look from and look at. They still provide those pleasures for the eye.. ..I advise slow trains on branch lines, half-empty trains that go though meadows in the evening and stop at each once oil-lit halt. Time and war slip away and you are lost in the heart of England.

I know what he means and I’m grateful to have had what are now nostalgic memories of branch line travel in the 1960s. My interest in Natural History enhanced those trips, just as it does when enjoying modern train travel. In the most pleasant sense, there is no escape from having a knowledge of Nature.