Where science meets art - the usefulness and beauty of nature printing


Today, there are a large number of guides and web sites that help us to identify plants and animals. These may contain accurate printed illustrations, photographs, or video clips and, taken with the descriptions in the text, notes on habits etc., we can usually come up with a name. We are not always correct in our identification, as some organisms look very similar to others, but we can certainly get close.

The Victorian followers of the “craze” for Marine Biology had far fewer sources to help them. There were the beautiful illustrations in books by Philip Henry Gosse of many types of marine animals, and illustrations of seaweeds by William Henry Harvey (produced from 1846-1851) 1 and Margaret Gatty (1863), 2 largely the result of prints made from water colour paintings. Some seaweed collectors also had other sources, should they be able to obtain copies of rare books. Those fortunate to gain a copy of Algae Danmonienses by Mary Wyatt (aided by Amelia Griffiths) 3 will have had the opportunity to see mounted herbarium specimens. These have the advantage of allowing the surface of the algae to be examined, albeit in dried form, and this can be helpful when looking at diagnostic features. However, there were, of necessity, rather few copies and they would not be used by the general followers of the “craze”.

Shortly after the appearance of Algae Danmonienses, Anna Atkins produced a wonderful series of illustrations of algae in her Photographs of British Algae: Cyanotype Impressions, produced from 1843-1853. 4 The process of cyanotyping is described by Roderick Cave in his fascinating and attractive book Impressions of Nature: a History of Nature Printing. 5 Atkins’ illustrations are outlines of seaweeds, so lack the fine detail required for identification, but they are among the first biological illustrations that use photographic techniques and they have a magical quality. To make each illustration, a seaweed was placed on to paper which had been treated with iron salts (potassium ferricyanide and ferric ammonium citrate) and kept in the dark until needed. On exposure to sunlight, the iron salts darken to a deep blue colour, leaving the outline of the seaweed, with its densest parts the lightest colour as the iron salts were not transformed. Washing off the remaining salts ensured that no further colour change occurred and each illustration could then be dried and made ready for incorporation into a collection. Cave tells us “It was published in an edition consisting of at least thirteen copies, calling for a total of over 5000 prints to be made.” 5 Although Anna received help, it was a formidable achievement and must have seemed extraordinary at the time - her prints certainly retain their great beauty.

Another method of nature printing was that developed by Alois Auer, and this was applied to seaweeds by Henry Bradbury. Auer was appointed the Director of the Austrian National Printing Office in 1842 and he was an “unusual, gifted and energetic man”. 5 With a colleague, he experiment in pressing lace between two plates, one of lead and one of steel, with the result that the former received an impression from the lace that could be used in printing a copy. If the lead was coated with copper using an electrolytic process, several prints could be made from one plate, and the results were so convincing that observers believed that they were looking at lace rather than prints (two examples are shown below). This technique was then used to make impressions and prints of botanical specimens and Auer demonstrated this to a visiting Englishman, Henry Bradbury, whose father was the senior partner in the Publishing House responsible for printing Punch and The Field, as well as newspapers. 5 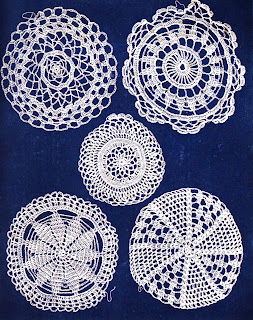 On return to England, Bradbury set about making nature prints and, after a series was used in Thomas Moore’s book on ferns, produced illustrations of seaweeds for The Nature Printed British Sea Weeds: Nature Printed by Henry Bradbury published by Johnston and Croall in 1858-1860 and printed by the family firm of Bradbury and Evans. 6 As the specimens used had been pressed, there was inevitably some distortion in the width of some parts, but the impressions were almost as good as herbarium specimens and certainly more useful than cyanotypes. If they were coloured effectively, it could be argued that they were even better than the illustrations produced from prints of paintings, as they conveyed the dried texture more accurately. The prints by Bradbury also had the advantage over cyanotypes and herbarium material in allowing large numbers of copies to be produced once the lead plates had been copper-coated. However, The Nature Printed British Seaweeds was not as successful as the book on ferns and Cave suggests this was because Johnston and Croall were not as well known as Moore (then, as now, names count). 5 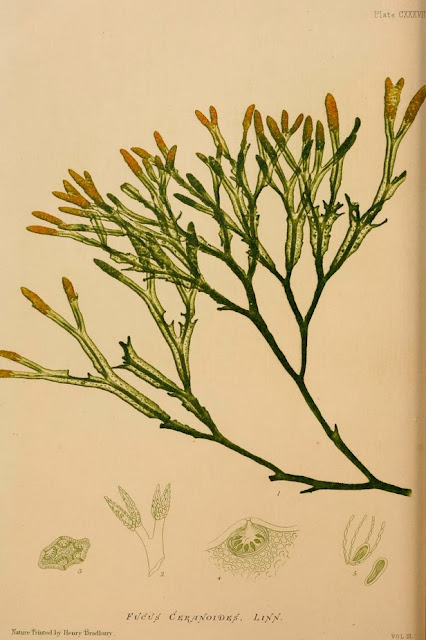 No-one looking at the nature prints of Atkins and Bradbury will fail to be impressed by their techniques. In her review of the book Ocean Flowers: Impressions from Nature, Sandra Knapp writes: 7

The art of nature printing, using modern versions of cyanotypes or other techniques, is still very much alive. For example, the British artist Angela Easterling [see below] works with scientists from the Eden Project, The Royal Botanic gardens at Kew and the Natural History Museum to make amazing cyanotype images of threatened plants in threatened habitats. Her images.. ..are wonderful, contributing both to art and science.

I became aware of nature printing when looking at the work of Merrin in making preparations of the scales of butterfly wings (http://rwotton.blogspot.co.uk/2013/08/nature-printing.html) and was amazed at the results he achieved. Nature printing using cyanotypes and the Auer method provided me with a further eye-opener and I revel in the idea that the images are of value both to science and art. Using the expression coined by Henry Gosse in the Preface to the The Romance of Natural History, 8 I was trained to be a “Dr Dryasdust”; although I retained a child-like amazement at the beauty of animals I collected and then observed under the microscope. It’s the way we interpret our impressions of plants and animals that makes Natural History so fulfilling and something that we can all share - from the most dedicated taxonomist to those inspired by the visual arts.

1 William H. Harvey (1846-1851) Phycologia Britannica: or History of British Sea-Weeds, containing coloured figures, generic and specific characters, synonymes and descriptions of all the species of algae inhabiting the shores of the British Islands. London, Reeve Brothers.

2 Mrs Alfred Gatty (1872) British Sea-Weeds drawn from Professor Harvey’s “Phycologia Britannica”; with descriptions, an amateur’s synopsis, rules for laying out sea-weeds, an order for arranging them in the herbarium, and an Appendix of new species. London, Bell and Daldy.

For those interested, the web site for the Nature Printing Society is: http://www.natureprintingsociety.org/