During my career, I attended many conferences on Aquatic Biology and they always attracted exhibitors demonstrating nets, electronic measuring equipment, collections of the latest books, etc.. Occasionally, there would be something different and, at one conference, I came across a stand where jewellery was for sale. At first, it was not easy to see the connection to life in water, until it was explained that the various earrings and pendants were made from cases that had been produced by caddis fly larvae. Partly because of the novelty, and partly because they were attractive, I bought a pair of earrings that had cases made from fragments of jasper and my wife was pleased with them, and intrigued by the story of their manufacture. 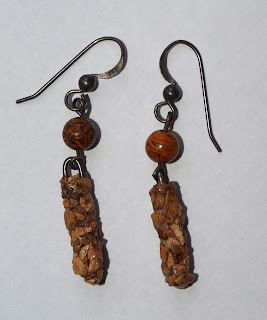 Subsequently, I found that this type of jewellery is available from several sources and, in addition to the use of fragments of natural stone, caddis fly larvae are allowed to build cases with precious stones, pearls and even gold fragments. 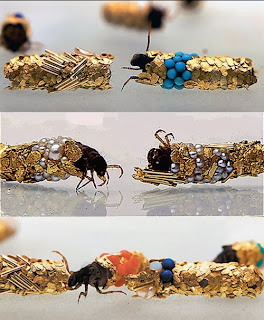 Many, but not all, caddis fly larvae build cases, and the materials that they use vary from species to species. Some build cases of vegetation and some of stones of a range of sizes, the common feature being that all the separate pieces of material are cemented together with silk produced by the insects from modified salivary glands, which exit near the mouth. The silk is not only strong but highly adsorptive, and its “stickiness” is not affected by it being produced under water. It was silk that bound the stones of jasper in my wife’s earrings and, having produced a case, it was an easy matter for the jewellers to remove the larva, pick up the cases, dry them and then cover them with lacquer to ensure that they would not fall apart for years. The larva could then start the process all over again, just as it would do in natural conditions if, for some reason, it was separated from its case. 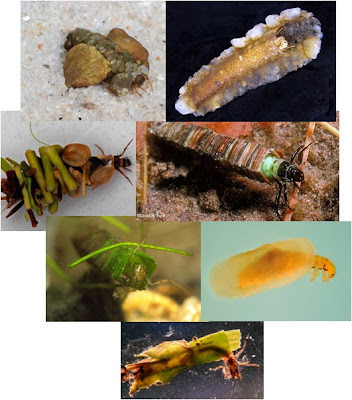 Caddis larvae use cases for protection, camouflage and ballast, but some forms do not make cases, using silk to provide an enclosure to which stones may be attached, or to make feeding nets. These vary from wide aperture nets, useful for capturing materials from a fast current, through to large sac-like nets in which the larva lives while grazing over the material that has accumulated. Some caddis larvae are free-living predators and they have neither cases nor silk nets. Other caddis larvae build cases entirely from layers of silk. Whatever the adaptations shown by the larvae, it is important to remember that the larval stage is but one part of their life cycle. Having completed five larval stages, moulting between each to achieve larger size, the final stage larva spins a cocoon in which to pupate. This cocoon is frequently covered with stones or other materials and is cemented to the substratum using silk. A complete transformation of the insect now occurs, with the adult biting its way from the cocoon and emerging from the water to fly away and complete the life cycle by mating and laying eggs back into the water.

For those who believe in the literal accounts of Creation in Holy Books, the biology of these insects is easy to explain - a deity designed each species, its life cycle and its choice of whether to build a case, or not. Furthermore, the materials that each species used in case construction, and its preferred habitat, were all designed and the insects put in place some time in the first days of life on Earth. All very straightforward, but I am not a Creationist and therefore face some challenging questions - questions that I cannot answer readily (or at all):

1. Why the complex life cycle, with aquatic larval and pupal stages and terrestrial adults?

3. Why the choice of different case materials, or the building of nets?

Here are some thoughts on each of these questions:

Why the complex life cycle, with aquatic larval and pupal stages and terrestrial adults?

Primitive insects have larval stages that become progressively larger and it is from the last larval stage that the flying adult emerges. Evidence of this form of metamorphosis is seen by observation of dragonfly larvae, where the growing wing buds are seen throughout larval life, and especially in the last stage. Caddis larvae do not need to grow wing buds, or other adult features, as the re-organisation of body form is completed within the pupal skin. In both types of development, all mechanisms are under genetic control, so the evolution of the genetic template is the basis of everything. We can only speculate on how pupation developed, but it must have resulted from mutations that, taken together, allowed the dramatic transformation from larva to adult. How did it happen; and did it occur gradually, or in an explosion of change? I don’t know.

We know that aquatic insects were originally terrestrial in all their life stages and that they had originally evolved from an ancestral form that was marine. Interestingly, there is evidence that the invasion of fresh waters by different groups of aquatic insects has occurred at different points in geological time, 1 from ca. 200,000,000 years ago through to more recent times (perhaps just tens of millions of years ago). Interestingly, while there are many types of aquatic insects in streams, rivers, ponds and lakes, they are rare in marine habitats.

Why the use of silk?

The ancestors of caddis flies, and some other insects, evolved the secretion of silk from the salivary glands, the original secretions being use in feeding. Silk consist of a complex of materials, including very strong protein filaments and, once evolved, the insects had an excellent mechanism for joining components of cases or for making tent-like refuges. As silk is equally effective under water, this feature was of advantage when the invasion of flowing and still fresh waters occurred.

Why the choice of different case materials, or the building of nets?

Having invaded water, ancestral caddis flies would need to acquire food. The production of silk nets allowed the capture of particles from flowing water but the water could also cause the displacement of larvae. This may be the origin of stone cases as ballast, as well as for protection. If larvae were protected from being swept away, and avoided predation by having cases that were made of the materials that surrounded them, they would have had an increased chance of survival. Thus, the genetic basis of the case-building habit will have been passed to future generations. Different types of cases show adaptation to different habitats and ponds with abundant vegetation will provide different selection pressures than streams or lake shores with stony substrata. As the caddis larvae spread throughout fresh waters, the formation of different species resulted from the selection of characteristics that promoted separation of ancestral breeding stocks and thus a diminished chance of inter-breeding, something which also occurred with the geographical separation of adults, together with changes in their breeding behaviour and apparatus. This process of speciation explains the many different forms that we see today.

It is difficult to comprehend the time periods over which evolution has occurred. However, thinking about the possible evolution of caddis flies is, to use a modern term, awesome and, for me, much more compelling than ideas based on Creation and a Designer. However, if it’s information you want on the various events during evolution.......