A famous “ride” - Charles Waterton and the Cayman


In his biography of the Nineteenth Century Natural Historian Frank Buckland, 1 George C Bompas mentions a letter that Frank wrote to the Temple Bar Magazine about a coachman he remembered well:
I had great respect for this coachman, as he once brought my father a semi-dead crocodile, in the coach boot, from Southampton. My father turned the dead crocodile into the pond in the middle of the quadrangle at Christ Church, to revive him; but he refused to be revived, so I rode about upon him, Waterton fashion, and somehow I always associated the Southampton coachman with a crocodile.
Frank’s father was the famous Dr William Buckland, then Canon of Christ Church Oxford and later to be Dean of Westminster, and himself a Natural Historian and Geologist, in addition to being a cleric and a socialite. The Waterton referred to in the quote was Charles Waterton, the Squire of Walton Hall, and his riding on the back of a caiman was a well-known piece of derring-do of the times, commented on by a society which loved such tales.
Charles Waterton was a free spirit, known for his books describing Wanderings (travels) in Demerara (Guyana) and elsewhere. Waterton was a close observer of Natural History and he was also a taxidermist of note, catching and preparing specimens that were then brought back to his collection in Yorkshire. It was on the Third Wandering that he rode on the back of a caiman (Cayman of Waterton) that had been captured using four barbed hooks that were bound together and baited. Having captured the caiman, it now had to be brought ashore and without any injury to its skin, as it was to be added to the collection. This is what Charles wrote about the capture:
…The people [in the hunting party] pulled the Cayman to the surface; he plunged furiously as soon as he arrived in these upper regions, and immediately went below again on their slackening the rope. I saw enough not to fall in love at first sight. I now told them we would run all risks and have him on land immediately. They pulled again, and out he came… …This was an interesting moment. I kept my position firmly, with my eye fixed steadfast on him.

By the time the Cayman was within two yards of me I saw he was in a state of fear and perturbation. I instantly dropped the mast [Charles had taken the mast from his canoe and intended to thrust it into the throat of the caiman, if needed], sprung up and jumped on his back, turning half round as I vaulted, so that I gained my seat with my face in a right position. I immediately seized his fore legs, and, by main force, twisted them on his back; thus they served me for a bridle.

He now seemed to have recovered from his surprise, and probably fancying himself in hostile company he began to plunge furiously, and lashed the sand with his long and powerful tail. I was out of reach of the strokes of it by being near his head. He continued to plunge and strike and made my seat very uncomfortable. It must have been a fine sight for an unoccupied spectator.

The people roared out in triumph, and were so vociferous, that it was some time before they heard me tell them to pull me and my beast of burden farther inland. I was apprehensive the rope might break, and then there would have been every chance of going down to the regions under water with the Cayman...

...The people now dragged us above forty yards on the sand: it was the first and last time I was ever on a Cayman's back. Should it be asked, how I managed to keep my seat, I would answer, - I hunted some years with Lord Darlington's fox hounds.

After repeated attempts to regain his liberty, the Cayman gave in, and became tranquil through exhaustion. I now managed to tie up his jaws, and firmly secured his fore-feet in the position I had held them. We had now another severe struggle for superiority, but he was soon overcome, and again remained quiet. While some of the people were pressing upon his head and shoulders, I threw myself on his tail, and by keeping it down to the sand, prevented him from kicking up another dust. He was finally conveyed to the canoe, and then to the place where we had suspended our hammocks. There I cut his throat; and after breakfast was over commenced the dissection.

Charles must have enjoyed recounting the story to anyone he met and, no doubt, did so with relish. It was certainly a well-known event of the times, as we saw in the quote from Frank Buckland, yet the caiman was not huge and it was being pulled by a rope attached to the barbed hooks in its throat, so there was less danger from being bitten than might otherwise have been the case. Sitting astride the caiman and lifting the forelegs backwards and upwards was an eminently sensible way for a brave man to avoid both the jaws and the lashing tail of the beast, until the animal could be subdued and killed. The preserved caiman in question is in the Wakefield Museum 2 and it certainly looks little damaged when one gazes down at it, so Charles was successful in achieving his objective. The capture was celebrated in a painting by Captain Edwin Jones, 3 an old friend of Charles (and who had joined him in climbing to the top of the Cross on St Peter’s in Rome, but that’s a story for another blog post). The painting is clearly a piece of fun, decorated as it is with all manner of tropical birds, but it became a popular image of Charles Waterton. 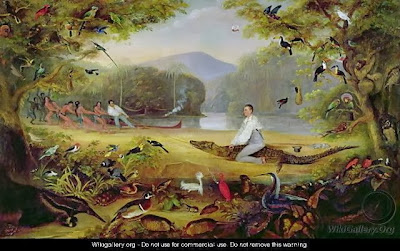 One of Charles’ most notable detractors, James Simson, wrote this comment in his hostile biography, 4 that contained attacks on almost every aspect of the Squire’s life:

...in Demerara... ...he is held in pleasant remembrance, for the friendly feeling which he always expressed for the Colony; but a laugh is generally raised when allusion is made to some of the statements in his Wanderings; that of “riding the cayman” causing the loudest one.

It may be true that Charles’ enthusiasm sometimes caused him to elaborate some passages in the Wanderings but, although celebrated as a good story, I have already advocated that sitting on the back of the caiman, while lifting the forelegs from the ground, was a sensible tactic if the animal was to be captured alive and undamaged. However, Simson won’t let go of his attack and mentions a conversation that Waterton had with someone he met:

This gentleman must have been of little intelligence, or had very superficially read the Wanderings; or had had his opinions much influenced by Waterton’s territorial and social standing, and the notoriety which he had acquired by his pursuits in natural history. And the circumstances are very apt to affect the ideas of people in regard to Waterton at the present day; although no one, certainly no Yorkshire man, should have a difficulty in deciding the question, that a person could not ride far or fast, or “ride” at all, on any quadruped (a kangaroo, perhaps, excepted) on its two hind feet, whatever was done with the fore ones.

So the attack is based largely on a misconception of what happened when the caiman was brought ashore and, certainly, on the way in which these animals move on land. Simson finishes his attack with this:

There is little to be drawn from the works of Waterton calculated to inspire confidence. His having been brought up so completely under the influence of the Jesuits was a drawback in the estimation even of a large part of his co-religionists. The affected style of much of the Wanderings, embracing page after page of apostrophizing... ...and his “thouing” and “theeing” the reader so frequently, were unbecoming a man of forty-three years of age, and nearly six feet in height, who had travelled and seen so much as he had... ...and ringing the change on kind reader, kind-hearted reader, benevolent reader, kind and gentle reader, etc., were in such contrast with his style, after publication, towards those who differed from him, that his action might be compared to that of one of his favourites, lifting its feet, and purring, and rubbing itself against its friends, and instantly presenting an aspect of “fearful asperity” to its enemies.

Strong feelings indeed. I agree with Simson on the importance of Charles’ Jesuit schooling at Stonyhurst College, but feel that this set him free, as his Catholic faith, and the values of the Jesuits, were fundamental to him and provided him with inner strength. I also agree that Charles had prolonged feuds, some of which he started and which he was happy to prolong, often with a sense of mischief. He also had long-term, close and loyal friendships.
Charles Waterton was considered worthy of a chapter of his own in Edith Sitwell’s The English Eccentrics, 5 yet he was a man about whom The Illustrated London News of 24th August 1844,  6 in a review of the Second Volume of Essays in Natural History, wrote: “In closing this brief sketch of Mr Waterton, we must not omit to mention that he is the first bird-stuffer in the world, and one of the most kind-hearted landlords, and a zealous and conscientious Catholic. A highly recommendatory feature of his writings is that they uniformly enjoin tender treatment of animals, and a generous sympathy with their persecutions.” That is Charles Waterton in a nutshell (although the secret of his taxidermy is that it avoided the need for stuffing....), but the picture accompanying the article is less good in representing Charles’ typical clothing, which was rather less formal:

3 There is some confusion in the literature over whether Captain Jones was called Edwin or Edward.