Why not eat sea anemones?

Vincent M Holt published “Why Not Eat Insects?” in 1885 and the book was given a new lease of life when it was reprinted in 1988 by the British Museum (Natural History). Holt raises a good question and, arguably, it applies even more today than it did in Victorian times. In addition to recommending a range of insects that are good to eat, Holt includes molluscs and, while recommending slugs of various species, it is cooked snails which he favours, giving two recipes from a book by M. S. Lovell, “The Edible Mollusks of Great Britain and Ireland with recipes for cooking them”, published in 1867. This is the Preface of that book:

“In these days, when attention has been so much directed towards the cultivation of the common kinds of eatable shell-fish, it is surprising that the importance of certain others for food has been hitherto almost entirely overlooked. We understand the good qualities of oysters, cockles, and a few other kinds; but some equally nutritious (which are universally eaten on the Continent) are seldom, if ever, seen in our markets, or are only used locally as food, and the proper modes of cooking them are scarcely known. I have therefore endeavoured to call attention to all the eatable species common on our coasts, and also to those which, though not found here in abundance, might be cultivated as easily as oysters, and form valuable articles of food.”

This comment from Lovell applies to both marine snails and bivalves, but the great Victorian Natural Historian Philip Henry Gosse provides us with another addition to gastronomy. In “A Naturalist’s Rambles on the Devonshire Coast”, published in 1853, he writes of one of his own experiments in cooking sea anemones. He collected Actinia crassicornis (now named Urticina crassicornis) and, after washing them in sea water, began to cook:

“Some I put into the water (sea-water) cold, and allowed to boil gradually. As soon as the water boiled, I tried one: it was tough and evidently undone. The next I took out after three minutes’ boiling: this was better; and one at five minutes’ was better still; but not so good as one which had boiled ten. I then put the remaining ones into the boiling water, and let them remain over the fire boiling fast for ten minutes, and these were the best of all, being more tender, as well as of a more inviting appearance.. .. In truth the flavour and taste are agreeable, somewhat like those of the soft parts of crab; I ate them hot, with the usual crab-condiments of salt, pepper, mustard, and vinegar, mixed into a sauce.. ..I wonder that they are not commonly brought to table, for they are easily procured, and are certainly far superior to cockles, periwinkles, and mussels. After a very little use, I am persuaded anyone would get very fond of boiled Actinias.” 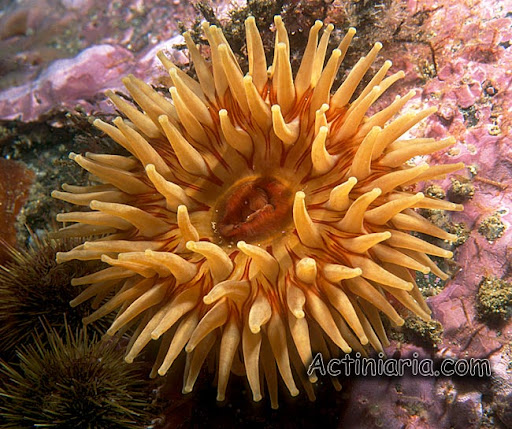 We know that Henry Gosse was a strong influence on the wonderful glass modelling of the Blaschkas (see my earlier Blog post) but could he also be an inspiration for other artists - the top experimental chefs of today? How splendid Anémone de mer a la Gosse would look on the menu of a Michelin-starred restaurant. It would be as big a talking point as snail porridge.