I heard Edward Elgar’s Introduction and Allegro for Strings for the first time while watching Ken Russell’s television documentary of the life of Elgar broadcast on 11th November 1962 (when I was 15 years old). In the film, the piece formed a repeating motif for the stages of Elgar’s life from a child, through young adulthood to old age. The music accompanied climbs up the Malvern Hills, first on a pony, then on a bicycle and finally in a motor car. Every time the theme was played I felt goose bumps and I can’t think of another documentary that has had quite such an effect on me. I didn’t know the name of this extraordinary piece of music, so had to find out by visiting record shops and, after purchasing an LP (yes, it was long ago) I hurried back and played it over and over. Why was that? Was it the documentary association with the splendid beauty of the views from the Malvern Hills, used in the repeating motif, or something more? Why does some music have such a hold over us? (For those readers who don’t know the piece, a recording can be found here: http://www.youtube.com/watch?v=6Ys-84N-fgk)

The Introduction and Allegro for Strings was written in 1904/5 and is an example of Elgar’s “outdoor music” [my term]. Five years earlier, during the summer of 1900, Elgar was working on the final score of The Dream of Gerontius, his great work based on a poem by Cardinal Newman about the passage of a soul into purgatory. He was staying at Birchwood Lodge, a rented cottage just four miles from his home in Malvern and the place where he was at his happiest. Michael Kennedy writes that he “loved the view from his study window – ‘a lot of young hawks flying about - plovers also – 150 rabbits under the window & the blackbirds eating cherries like mad’”. Later, in a letter to Augustus Jaeger (Nimrod of the Enigma Variations) on 11th July 1901, Elgar wrote: “One line to say we arrived here [Birchwood Lodge] & are in the intense quiet & solitude which I love.” 1 The task of finishing The Dream of Gerontius was demanding and the correspondence between himself and Jaeger at Novello, his publisher, included many discussions of detail and Elgar listened to the advice of his friend and trusted his judgement. There were times when composition went so well that he was able to write, again to Jaeger, on 11th July 1900: “This is what I hear all day – the trees are singing my music – or I have I sung theirs? I suppose I have? It’s too lovely here”. 2 In Michael Kennedy’s book we read that Elgar felt that “music is in the air all around you, you just take as much of it as you want”. It sums up the view that Russell emphasised; Elgar composed in the open air and only then needed to return to complete the composition. A similar comment is given by Michael De-la-Noy is his less than flattering Elgar the Man. 3 He quotes Oscar Wilde’s son Vyvyan Holland as saying: “Elgar ‘always carried small sheets of music paper about with him, and from time to time he would take one out of his pocket and jot down notes of some theme that had come into his head, humming as he did so’”. This practice was recalled by Elgar when writing to a friend in 1921 (when he was 64 years old): "I am still at heart the dreamy child who used to be found in the reeds by Severn side with a sheet of paper trying to fix the sounds & longing for something very great – source, texture & all else unknown”. 4 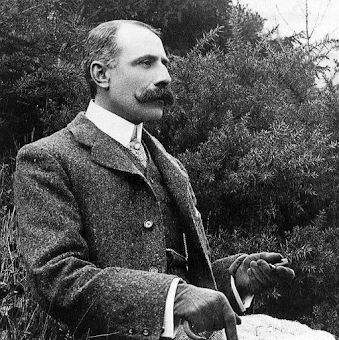 Elgar was also influenced by tunes he heard, in addition to the sounds of Nature and here we see a parallel to other English composers, like Butterworth and Vaughan Williams (although, unlike them, he was certainly not a collector of folk songs). Kennedy [Portrait of Elgar p. 218] describes how:

“In August of 1901 [ten months after the first performance of The Dream of Gerontius], the Elgars went for a week’s holiday to South Wales.. ..here, one day, as Elgar wrote in a programme-note four years later, ‘on the cliff between the blue sea and the blue sky, thinking out my theme, there came up to me the sound of singing. The songs were too far away to reach me distinctly....’”

“His ‘Welsh tune’.. ..had been brought back to his mind in 1904 ‘by hearing, far down our Valley of the Wye, a song similar to those so pleasantly heard on Ynys Lochtyn [during the 1901 holiday in Cardigan Bay]. The singer of the Wye unknowingly reminded me of my sketch.. ..the work [the Introduction and Allegro] is really a tribute to that sweet borderland where I have made my home’”

The countryside, the Malvern Hills and the rivers near Malvern were all so important to Elgar that he wished to be buried near the confluence of the Severn and the Teme “without religious ceremony”.3 Elgar was a complex man for, while he loved Nature and found woods an inspiration for his work, he also liked to chop down trees. It is also characteristic that he wished for a non-religious funeral, yet wrote The Dream of Gerontius. His religious faith, which was probably never strong, was replaced by a sense of place in Nature, although that is too simple an interpretation and Elgar was full of contradictions. He was a lower middle class countryman who greatly enjoyed being a member of the Court of King Edward VII; he had a devoted wife, yet was very influenced by several muses throughout his life; he loved “japes” and word play, yet was self-pitying and had thoughts of suicide. This short list can certainly be extended, yet he produced music that inspires deep emotions - influenced by people he knew and, more than anything, by the inspiration provided by the natural world of the region he loved. His conflicted personality was the driving force of it all and the results are for us to enjoy. Thank you Elgar - and thank you also Ken Russell.