We can't exist without slime


What is your reaction to slime? Most people find the substance, and even the thought of it, distasteful and yet we would not be alive if it was not for slime in one form or another.

Slime consists of chemical polymers that expand on contact with water, producing a clear, sticky substance that is ubiquitous and which we recognise from its slipperiness and its ability to stick to surfaces. The compounds that make up slime are referred to as exopolymers, or EPS, by those that study them and they consist principally of carbohydrates and proteins, although many other chemicals may also be found in the EPS produced by different organisms. They are truly ubiquitous: bacteria using them to attach to substrates; single-celled algae release them when producing an excess of carbohydrate during photosynthesis; and multicellular organisms use them for protection, locomotion, to aid in feeding, to aid buoyancy, and as a means of attachment [1]. 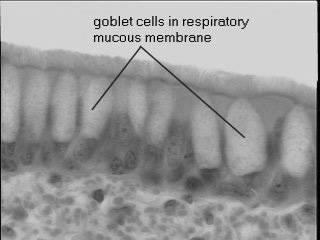 During evolution, some cells in multicellular organisms became adapted to have the sole function of producing the EPS that result in slime. These goblet cells (see above) discharge their contents to become hydrated and we are familiar with the resulting sliminess of animals like worms, slugs and fish.

I talked about EPS to an audience of trout fishers and this was recorded by the Wild Trout Trust [2] and one of the illustrations is shown below, together with the link to the video. I could only give a very few examples, but you get the drift of my talk: EPS are everywhere and yet they are largely ignored, even by scientists who should know better. Of course, there are prejudices to be overcome and at one conference dinner I was given a special prize for "the most revolting talk" given during the sessions. An award made in good humour, of course, but indicating that the subject was one that most find unpleasant. This is a pity, because EPS are one of the most important families of chemicals known. It is fair to say that humans would not exist if it was not for slime. This argument has two components: one that develops ideas on the evolution of humans and the other on the very important role slime plays in allowing our survival. Our most distant ancestors lived in water and left this medium when fish transitioned into the amphibians (and then into reptiles and mammals). Reptiles and mammals have body coverings that reduce the loss of moisture, something that is a threat to amphibians and also the first fish making visits to land. Anyone handling a fish is aware that they have a slippery covering and this protects the animal from attack by parasites and may aid locomotion: it is a feature that is retained by amphibians and serves to reduce water loss from their bodies when they are exposed to the air for long periods. It is also a common feature among soft-bodied terrestrial invertebrates such as worms and slugs, while others, like the arthropods, have an impervious exoskeleton that much reduces the threat of desiccation.

Fish slime protects the gills from abrasion and also provides a barrier against osmotic stress, a feature that is very important to salmon as they migrate from the sea to fresh waters. Yet gas exchange occurs from the water to the mucus and then to the tissue of the gill surface and this is a feature retained through the evolution of respiratory organs of amphibians, reptiles and mammals. Human lungs and nasal passages have a coating of mucus, moved by cilia that are a throwback to our very ancient protozoan ancestors, and it can be so plentiful that it has to be removed by blowing, coughing, or swallowing, the latter normally being a continuous and unconscious process. In addition to allowing gas exchange, this mucus acts as a trap for particles, both living and dead, and it is a convention that we blow an excess of the slime into handkerchiefs, often noting the extent of hydration once the mucus becomes dried, demonstrating admirably the extent to which the EPS had undergone considerable expansion when in contact with water. Larger quantities of slime than usual are produced when this first defence mechanism is triggered by infection.

It is not only nasal, and bronchial, tissue that produce mucus in humans, and other mammals, as slime is also found in the digestive tract and in the reproductive system. The slippery quality of mucus acts as a protection for the oesophagus and slime is produced elsewhere in the gut to allow smooth passage of the contents while protecting the wall of the digestive tract. The mucus is not broken down by enzymes and, when aqueous solutions of food chemicals are removed, characteristic compacted faeces result. These are bound with slime produced originally by the gut wall and also by EPS released by the many micro-organisms that are resident within the digestive tract; the microbes protecting themselves against digestion by secreting EPS that then become a binding material for the faeces.

The final use of slime in humans is in reproduction and, especially, in allowing the migration of sperm deposited within the female genital tract. Each sperm swims within seminal fluid that contains EPS and then traverses the cervical mucus and onwards into the uterus, where one sperm fertilises a waiting egg, if one is present. It should also be pointed out that mucus provides a lubricant to facilitate copulation.

Vital rôles indeed and it is fair to say that we would not exist without slime in one form or another, nor would very many other organisms

Having read this far in the blog post, what are your reactions? Perhaps you agree that I deserve to be thought revolting in writing, and talking, about such things, even though I respect proper taboos in polite company? Yet I am only highlighting the remarkable diversity of uses for slime and EPS and this deserves to be much better known, rather than being given the "Ugh! response" that seems to be most people's reaction to the subject. Why do we feel that way?