The headline on page 6 of The Independent on Saturday 1st August read [1]: 'What is fun about death and the killing of a beautiful creature?'. It was a quote from an interview by Jonathan Owen with the campaigner Virginia McKenna and focussed on the killing of a lion by a trophy hunter, but it set me thinking more widely about my attitude to killing organisms. I maintain that all creatures are beautiful, so, for me, the adjective is redundant.

I'll begin with two examples that only loosely fit the definition of a creature. As someone who has had a close encounter with E. coli (below, top left), I am very thankful for antibiotics and their power to kill the bacteria. However, studies in microbiology reveal not only a beautifully adapted organism, but one with tremendous powers of reproduction and the ability to fend off the defence mechanisms of the host. Killing them when they infect areas of the body other than the gut brings a great deal of relief but I wouldn't describe it as being fun. The same applies to the presence of weeds like dandelions in the garden, especially the lawn. No-one could dispute that they are beautiful plants, but we like them in the countryside and not messing up the neat arrangement of plants that we like to culture. Killing weeds never involves thoughts of regret at extinguishing the life of another creature, at least in my experience. 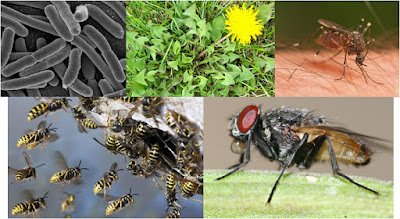 Having spent time in Northern Scandinavia on research visits, I know something about high densities of mosquitoes [2]: who was it who said they enjoyed the high-pitched noise of mosquito wing beats and likened it to singing? Adult females require blood before they can mature their eggs and they are both persistent at finding hosts and, despite their noisy flight, usually land unnoticed. Unfortunately, I react badly to mosquito bites and invariably get lots of itchy lumps as a result. Creams and anti-histamine sprays are of some assistance, but I try to kill the insects before attack, if at all possible. Not exactly the fun of the headline in The Independent, but certainly pleasurable. Yet I have studied larval mosquitoes in some detail, as I have the larvae of other biting flies, and I am amazed by the evolution of their feeding structures and the metamorphosis that results in such different body plans as those of the larvae and adults. I retain a sense of wonder, but this is not in my mind when I kill biting flies (and I've killed millions of their larvae). However, there are plenty left after my efforts.

Other beautiful creatures include wasps and blowflies (above, lower). All of us are amazed at the structure of wasp nests: the way they are constructed; the social behaviour of the inhabitants; and the capacity for workers to hunt and gather to bring food to bring to the nest. Wasps are brightly coloured to give a warning that they sting and we react to that, even though it evolved long before humans appeared on the Earth. Indeed, almost any insects with black and yellow striped abdomens receive the same treatment as wasps as we try to brush them away and, preferably, swat them. As I write, we have a wasp nest nearby and the workers often enter our house through open windows. Despite my admiration for the structure and lifestyle of wasps, I kill these intruders with relish and would ideally like the nest removed, wherever it might be. It's the same with blowflies and house flies and their beautifully adapted maggots [3]. I kill those with the same degree of pleasure.

All the examples thus far are of creatures which either cause harm or irritation to us, or to our immediate surroundings. What of the killing of creatures for food? Our hunter-gatherer ancestors captured animals to eat and we can still do this if collecting, fishing or shooting. However, we are now mostly dependent on buying animals that have been killed by someone else, although blue mussels are sold alive before we kill them by tipping them into a pan of boiling muscadet [4]. The food industry is geared to providing us not only with killed animals, but also gutted fish, or butchered meat, although this processing is largely hidden from us. Fish are caught at sea by lines or trawls, or gathered from large enclosures in fish farms, and they are allowed to die before being gutted and packed on ice. Meat comes mainly in the form of chickens, turkeys, sheep, cows and pigs that are farmed, with the latter three transported first to markets and then on to abattoirs for slaughter. I've visited an abattoir and it was not a pleasant experience, but not sufficiently unpleasant to stop me from being an enthusiastic omnivore. 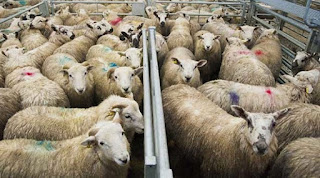 During disease outbreaks, it is common for farm animals to be shot in situ and their carcases burned or buried. It strikes me that killing livestock on farms is preferable to the market-abattoir route, although many may prefer the killing to continue being hidden from view. At least some chickens and turkeys are killed on the farms where they are reared, but the conditions in which they live vary greatly. The intensive rearing of battery chickens for egg production is a case in point and I still remember vividly the smells, sounds and sights of a battery rearing unit that I visited forty years ago. Slaughter is just part of a brutal process, as it is with other intensively reared farm animals, and slaughter on site, or nearby, is hardly the compensation it would be for animals that are allowed a (relatively) free range.

Shooting livestock would be little different to hunting game, something that I've enjoyed. As I do not wish to kill the animals myself, my role in rough shoots is as a beater, walking up the game and watching the dogs quartering the ground ahead of the line of guns. It is a good day out and worth it just to watch the dogs in action, and most birds on shoots I've attended are shot cleanly. In addition, there is the prospect of being paid for my pleasure in the occasional gift of a bird and I'm very fond of game of all kinds. My sole experience of hunting deer came when I accompanied a friend who is highly experienced stalker. We could see roe deer in a clearing and I was told to lie down and watch while he moved through the wood to get into a good position to shoot. After minutes, there was a loud crack and the deer dropped dead and we were quickly on to it. We immediately performed the gralloch, which was not upsetting to me as it was no different to the dissecting that I had done as part of my Zoology training. The deer was grazing one minute and dead the next and I thought that was rather good, just like the killing of pheasants that died shortly after they were put to flight.

Killing to prevent attacks, or for food, seems acceptable to me, as long as death is rapid. Killing for fun is less acceptable, although I recognise that some people get pleasure from slaughtering large numbers of fish and higher vertebrates, enjoying in this way their power over Nature. Selecting the killing of a lion, albeit in a gruesome manner, highlights our approach to the killing of all living creatures, each a remarkable example of the power of evolution.