Mention slugs to people and you are likely to get "Ugh!" as a response - and from gardeners a more hostile reaction. This is because slugs are slimy and they also eat plants, often in competition with humans when we are growing plants for food or decoration. 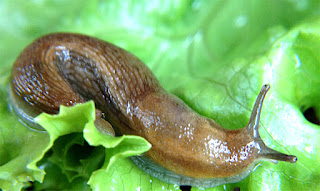 To a Natural Historian, slugs are fascinating, as they are gastropod molluscs that have lost their shell during evolution. Adult gastropods, with few exceptions, move using muscular contractions and expansions of the foot, sliding over a film of secreted slimy mucus. Production of mucus is also important in providing a body covering to prevent desiccation and as a deterrent to predators. Nevertheless, many slugs are predated and gardeners are encouraged to provide areas for hedgehogs or predatory birds. One solution to the pest problem that is rarely mentioned is the collection of slugs for food, just as we gather some types of snails (Roman snails, winkles, whelks, etc.). Here is a recipe adapted from one posted on the "eattheweeds" website [1]:

Allow slugs to feed on salad leaves and then kill them in a vinegar-water mixture before boiling them in water, repeating this three times. The prepared slugs can now be used to make patties.

Beat 3 eggs with 3 tablespoons of double cream and add the mixture to 3 tablespoons of flour, the same quantity of cornmeal, and 10 slugs (chopped into bite-sized pieces). Whisk, form into patties, and then fry in butter. Serve with bread and salad.

Some of you may find this low on your list of recipes to try, but slugs are attracting the interest of at least one celebrity chef [2] and they are a source of protein that is readily available. Hugh Fearnley-Whittingstall recommends slugs cooked in a tomato sauce [2].

Less familiar to us than terrestrial slugs are those that live in the sea and these are not easily gathered in quantity, so are unlikely to be utilised widely as food. There are reports of sea slugs being eaten by humans, but these accounts arise from confusion with sea cucumbers (holothurian echinoderms) that are eaten in many parts of the World. Holothurians formed part of the famous dinner of the Acclimatization Society in 1862 where views on flavour and consistency were mixed [3]. However, true sea slugs are now finding their way on to speciality restaurant menus [4] – and note that the article refers to them as "trash from the sea". It is an unfortunate term for remarkable and beautiful animals. 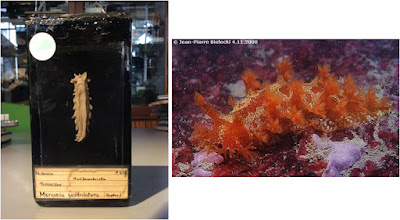 It was a sea slug, Marionia sp, that I "adopted" at the UCL Grant Museum of Zoology [5]. It is mounted with the foot facing the viewer and this was done to allow students, and other observers, to see the dimensions of the foot and thus the area in contact with the substratum (see above left).  Unfortunately, preservation in spirit removes pigment and the living specimen would have been light orange in colour, providing camouflage (see above right). Reference to the Sea Slug Forum [6] shows the range of sea slugs and some of their extraordinary adaptations and beautiful colours. These colours are not for our appreciation, of course, although a Creationist might disagree, but to provide warning or camouflage. Warning of what? I'll come to that question, but first we need to know a bit more about the body plan of sea slugs and how they are different to snails. 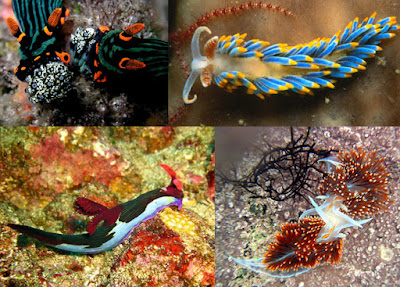 During evolution, some of the internal organs of gastropods underwent torsion, with the gut opening forward into the mantle cavity at the shell entrance. Slugs, including sea slugs, have undergone de-torsion, with the anus being towards the rear, nearer to their ancestral positions. The anterior end of the gut of snails and slugs features a rasping tongue, or radula, and this is used to remove food from the surface of stones or vegetation, or for scraping away the tissue of living plants and animals. Marionia feeds on corals [7] and the Grant Museum specimen, labelled Marionaria quadrilatera (but actually Marionaria blainvillea) would have fed on these colonial animals while living in the Mediterranean Sea.

A characteristic of corals is the ability of individual polyps to retract and to use stinging cells as a means of catching food, just like their relatives the jellyfish (many corals also generate their own food by harbouring algal cells within their tissues). The stinging cells, or nematocysts (see below), have a trigger that releases a thread through which toxins are injected to immobilise prey, a series of small barbs holding the thread into the tissue. They also serve in defence and a grazing sea slug will be at risk of being attacked by these stinging threads as they eat the coral tissue, even when polyps are retracted. The evolution of stinging cells in coelenterates is an amazing adaptation, but there are some sea slugs that eat coral tissue without the nematocysts discharging. Not only that, intact cells can be moved to extensions of the body, called cerata, on the back of the sea slug through branches of the gut that extend into the projections. Any animals attacking these sea slugs now receive stings from coral nematocysts and the bright colour of the molluscs probably acts as a warning. 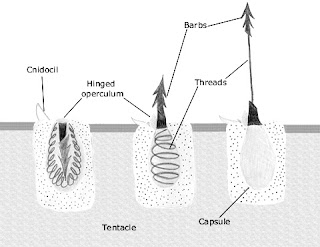 Slugs may not appeal to everyone, but we should all be amazed at some of their adaptations. How these evolved can only be speculated upon, but there are few examples in nature as extraordinary as the evolution of nematocysts by coelenterates, followed by their hijacking by some sea slugs. It's worth thinking about if you feel tempted to eat some.

The UCL Grant Museum of Zoology gave permission for me  to use the photograph of the preserved Marionaria specimen.