Garden plants, seeds and being unnatural


Flowering plants produce seeds and these are dispersed away from the parent plant, many mechanisms having evolved for this purpose. These mechanisms range from winged seeds, to those with parachutes, plants having “pepperpots” to scatter seeds, to those that use explosive discharge. Wide-ranging dispersal is achieved after attachment to, or ingestion by, animals, and seeds may also be carried very long distances by wind and water. Providing conditions in newly-colonised regions are suitable for development, plants are then able slowly to increase their range. With changes in climate, and the movement of continents, through geological time, flowering plants have been very successful in colonising almost all terrestrial habitats and even some aquatic ones. This success is not the result of dispersal ability alone, but also of mutations in their genetic structure, resulting in adaptations of both structure and physiology. As a result, flowering plants are found in deserts, on mountains and in high latitudes as well as the profusion of types we find in temperate and tropical regions.

When early humans began to cultivate some of the wild plants around them, they began to select those that could be bred to produce crop plants, this being accompanied by a reduction in diversity, as the natural community was managed by our farming practices. Yet further along in human evolution, when we started having plants for decoration, even more selective breeding was undertaken and, as humans began to migrate, it was possible to take the seeds of plants that we liked, or needed, with us. That is the background to the work of botanical collectors who, for centuries, journeyed to find new wild plants in distant countries and then bring their seeds back for cultivation. The extent of such deliberate imports is unique to the activities of humans; no other organisms do this. 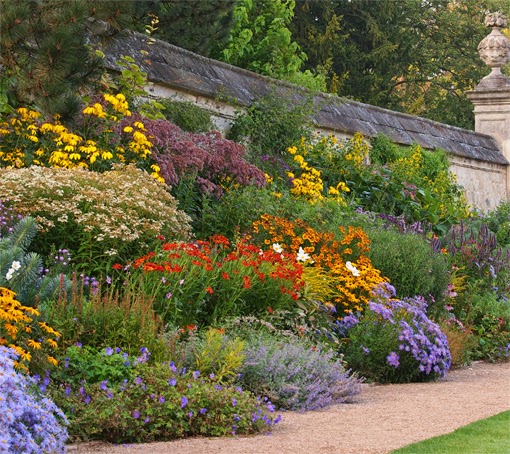 Many gardeners are familiar with the huge array of types of garden flowering plants that are available (and we not only propagate from seeds), but less familiar with their origins. Below are some suggested plants for borders given by Anna Pavord, the excellent writer on gardening [1]; the types of borders (Anna Pavord’s headings) being for gardens in temperate Europe. The scientific names of plants are given, together with their common names and varieties (the latter resulting from selective breeding by horticulturalists) and the original geographical locations of the parent plants [2]:

Of these twelve plants, eight (67%) have European origins and one further has a wide distribution with many European relatives. A characteristic of cottage gardens is their “naturalness” and the recommendations above contain cultivars of wild flowers likely to be found in close proximity to the garden, cottages being characteristic of the countryside - at least, that is the image to be created. The planting is boosted by the appearance of plants that are not part of the natural flora of Europe.

A scheme for scent

There are eleven plants in this list, with seven (64%) that originate in Europe. In two cases (Pelargonium and Dianthus), the origins are vague as the possible parental stocks have a worldwide distribution.

Given that the intention is to create a tropical summer border, it is no surprise that none of the plants originate in Europe and, indeed, many can only be grown outdoors during summer, as they cannot tolerate cold temperatures. This is another feature of the power of humans in gardening - we not only use transplantation of species, but choose where, and when, to locate them. There is a wide geographical spread of origins, including one representative found solely on an island chain.

As would be expected, there are no representatives from Europe in this list and the geographic spread is even wider than for the tropical summer border. It is worth pointing out that some desert plants cannot be grown outdoors in most of Northern Europe and fanciers of cacti and some succulents will need heated greenhouses for their collections. This is an example not only of human ability to transplant, but also to change the environment in which the imported plants grow.

Although a very large number of plants have been collected for gardens, some have escaped and invaded surrounding areas, mingling with the native flora. This represents a reverse of the position of weeds (wild, native plants) in gardens and, while many of the invaders from gardens provide an excellent “show”, some have habits which mean that they become a nuisance, sometimes dominating, and excluding, local plants that would not have to compete under natural conditions with these very recent invaders. There are many examples and I’ll just mention three.

Hedychium gardnerianum (Kahili Ginger - below, top) is native to the Himalayas and is a striking plant which has been imported both for its foliage and for its scented spikes. It produces sticky seeds that aid dispersal in its natural habitat and these also provide one of the means that encourage its spread elsewhere. It has become a serious invasive pest in several areas of the world and, once present, is difficult to remove. The same can also be said of my other two examples: Impatiens glandulifera (Himalayan Balsam - below, middle) and Fallopia japonica (Japanese Knotweed, below, bottom). As its common name suggests, I. glandulifera is, like H. gardnerianum, a native of the Himalayas and shares the same high dispersal ability. The balsam has attractive pink flowers which appeal to gardeners, and its success in dispersal results from the explosive release of seeds that scatter from the parent plant. As riparian zones of streams and rivers are especially favoured by these invading plants, the flowing water provides another excellent means of dispersal, as the seeds are carried downstream after being shot out. 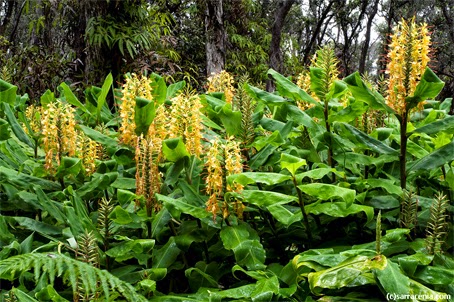 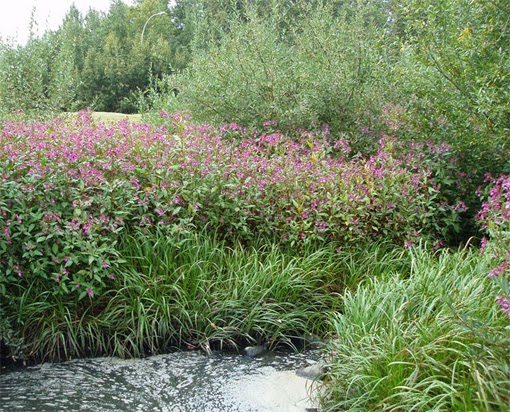 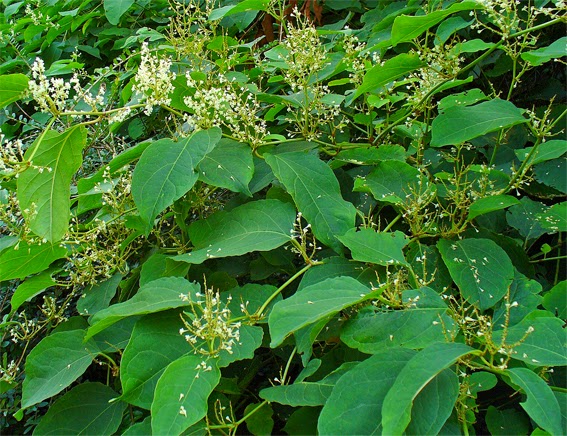 F. japonica colonises many habitats.  A hollow-stemmed plant, it shows rapid growth and produces many leaves, giving effective ground cover and, with its height, a means of hiding unattractive or derelict areas. Vegetative growth by means of rhizomes ensures that there is strong lateral spread and only a small section of rhizome is needed for the successful growth of a new plant, the rhizomes possessing such strength that they can cause damage to buildings and any solid structures with which they come in contact. Once established, Japanese Knotweed is very difficult to kill and it is such an effective plant that special operatives may be necessary to remove it.

The collection of seeds from plants that grow in very distant regions, and then bringing them to countries that are highly unlikely to be colonised naturally, is a means of dispersal that is markedly unnatural. It should therefore not surprise us when some plants - and animals - "escape" and reach pest levels. They have been transplanted from the regions where they evolved over millions of years and where they are part of different, complex communities that contain natural controls.  It is another result of humans needing to modify Nature, rather than feeling part of it.