Anyone keeping cats is familiar with adult cat fleas (an example is shown below, upper). They may be discovered while combing the fur of our pets, or we may chase individuals we see on bed sheets, sometimes after they have bitten us. The females require a blood meal to gain the nutrients needed to produce eggs and, once laid, these hatch into larvae that live among cat fur, or fall off on to carpets and upholstery in our homes. Although cat owners recognise the adult flea, and its prodigious jumping ability, few know about the larvae (shown below, lower) - or even know of their existence. 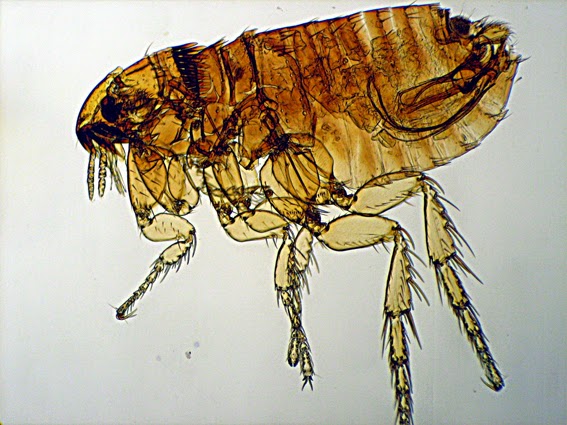 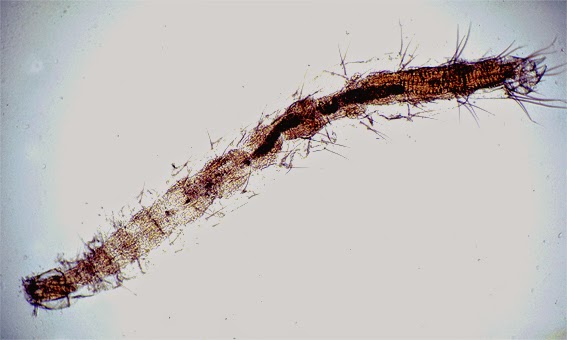 Jumping in adults is achieved by extending the long hind legs very rapidly by means of muscles, aided by a pad of a protein, called resilin, at the junction of the leg with the rest of the body. Resilin is one of the most elastic substances known; meaning that almost all the energy stored by distortion is released, with the protein returning almost perfectly to its original form. This is what happens when the leg is extended, contraction of the leg then distorting the resilin pad to again store energy. It is an extraordinary adaptation and, while this special protein is found in a number of insects, where it is associated with flight and the beating of the wings, it has “migrated” through evolutionary time to the hind legs in many types of adult fleas, like cat fleas, that are, of course, flightless. Whatever the explanation for the location of the awesome resilin, it enables fleas to jump impressively on to their hosts - and to avoid potential predators.

While we are annoyed at being bitten, and do all we can to kill fleas, we should remember just what extraordinary insects they are. They have complete metamorphosis, with larvae of quite different form to the adults, and a pupal stage in which the transition of forms occurs. That in itself is remarkable, but so commonplace that we lose our ability to be impressed by its evolution. Add in the structure of the hind legs of fleas, the presence of resilin pads, and their jumping ability and we should be even more amazed.

Chegoes are certainly amazing. Those who travel to tropical Africa, the Caribbean and tropical South America will be familiar with chegoes and readers of Charles Waterton’s descriptive books will have been both fascinated, and horrified, by his accounts of these insects:

The chegoe resembles a flea; and, had you just come out of a dovecot, on seeing it upon your skin, you might easily mistake it for a small pigeon flea; although upon closer inspection, you would surmise that it is not capable of taking those amazingly elastic bounds so notorious in the flea of Europe. [1]

Waterton’s observations on the jumping ability of chegoes is corroborated by other observers and may explain why they attack the lower parts of the limbs of their hosts and why they tend to infest similar regions in humans. I will not provide illustrations of the pathological effects of chegoes (they are not for the squeamish) but leave it to Waterton to provide a description of his contact with the insects during his Third Journey to South America in 1820:

It looks exactly like a very small flea, and a stranger would take it for one. However, in about four and twenty hours, he would have several broad hints that he had made a mistake in his ideas of the animal. It attacks different parts of the body, but chiefly the feet, betwixt the toe nails and the flesh. There it buries itself, and at first causes an itching not unpleasant. In a day or so, after examining the part, you perceive a place about the size of a pea, somewhat discoloured, rather of a blue appearance. Sometimes it happens that the itching is so trivial, you are not aware that the miner is at work. Time, they say, makes great discoveries. The discoloured part turns out to be the nest of the Chegoe, containing hundreds of eggs, which, if allowed to hatch there, the young ones will soon begin to form other nests, and in time cause a spreading ulcer. As soon as you perceive that you have got the Chegoe in your flesh, you must take a needle, or a sharp pointed knife, and take it out. If the nest be formed, great care must be taken not to break it, otherwise some of the eggs remain in the flesh, and then you will be annoyed with more Chegoes.. ..Sometimes I have taken four nests out of my feet in the course of the day. [2]

Unknown to Waterton, chegoes are indeed fleas - “a very sharply defined order of insects without close connexion to any other group” [3] - and they are the smallest fleas yet discovered [4].

After landing on a suitable host by walking, or jumping weakly, female chegoes (see below) burrow into the skin and end up with the mouth parts able to suck up blood and the posterior tip of the abdomen only protruding to allow excretion of the dark, blood-rich faeces (a micrograph of a buried female chegoe is shown below - taken from the paper by Eisele et al. [4]). It is thought that mating occurs when the female is embedded, but this is debated currently [5] and an alternative view is that females mate after taking a blood meal from a temporary visit to a host [5]. There is agreement that feeding on blood occurs before mating and, once embedded, a dramatic change in the body of the female takes place. Although he didn’t know it, the “nest” that Waterton describes is the greatly distended abdomen of the female adult flea and it has a volume 2000-3000 times the original and fills with eggs that are then “ejected with considerable velocity” [4]. Most observers find larvae living in sandy soils, where they feed on detritus and it is unlikely that the bloody faeces produced by adults are a significant source of food, as they are, for example, for the larvae of cat fleas. Five weeks after the initial invasion by the female chegoe, the remains of her dead body are expelled from the skin [4] and there is little further adverse effect on the host. 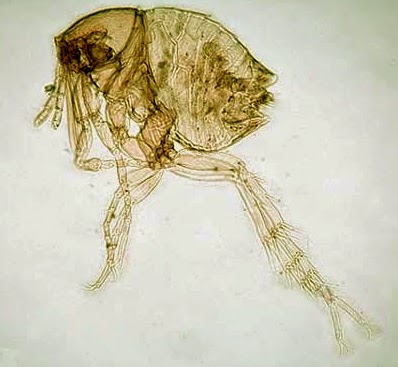 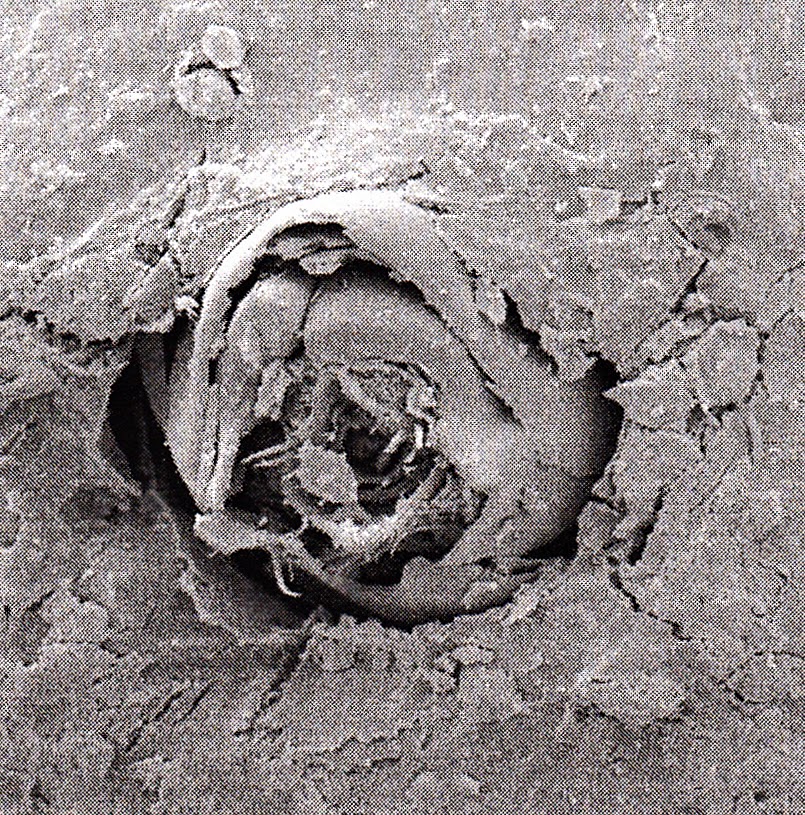 Whatever your reaction to chegoes, it is impossible not to be impressed by their natural history. Humans are very recent in evolutionary terms and the adaptations of these, and other, fleas precede our appearance by millions of years. However, we cannot ignore such organisms when they affect us adversely by their behaviour and we can feel that their attacks are deliberate rather than opportunistic. As a devout Roman Catholic, Charles Waterton’s fascination was certainly anthropocentric and related to his view of the wonders of Creation, although, unlike some other Nineteenth-Century Natural Historians, he did not preach to his audience on the topic. For those who find evolution to be a more pleasing explanation of the extraordinary adaptations of organisms like fleas, there is the perpetual - and intriguing - question of how it all evolved. Was it by a succession of very small changes, or were there sudden, dramatic changes in the genetics of organisms that then controlled their structure and behaviour?

[1] Charles Waterton (1870) Essays on Natural History (edited, with a life of the author by Norman Moore B.A.). London, Frederick Warne and Co.

[2] Charles Waterton (1973) Wanderings in South America, the North-West of the United States, and the Antilles, in the years 1812, 1816, 1820 and 1824 with original instructions for the perfect preservation of birds and for cabinets of natural history (edited with an Introduction by L. Harrison Matthews). London, Oxford University Press.