Creatures with a human torso and a fish tail have appeared in the folklore and mythology of many cultures. 1 We know them as mermen and mermaids and examples became a popular feature of travelling shows and museums, Henry Gosse describing his great disappointment, as a boy, to discover the advertised mermaid was “a shrivelled and blackened little thing which might have been moulded in mud for aught I could see”. 1 It must have looked a little like the specimen shown below. 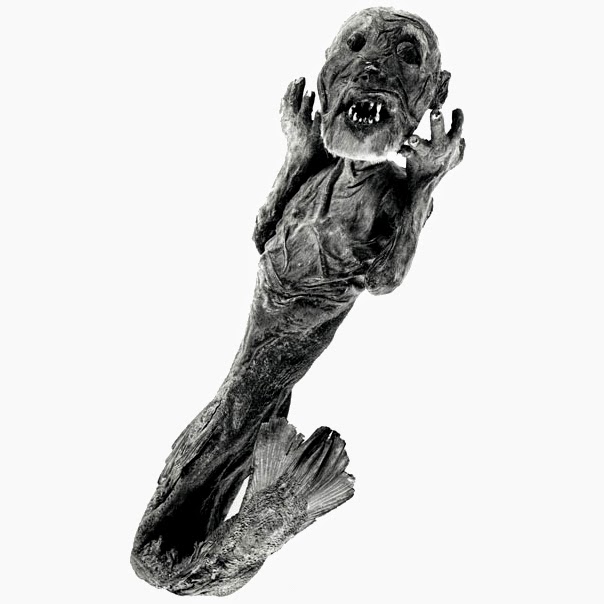 Frank Buckland, like Gosse an eminent writer and lecturer on Natural History, describes the body of merman he saw exhibited in London: 2

In the back parlour of the White Hart, Vine-court, Spitalfields, high and dry upon a deal board, lay this wonderful object - hideous enough to excite the wonder of the credulous, and curious enough to afford a treat to the naturalist. Such a thing as a merman or mermaid of course never really existed; I was therefore most anxious to examine its composition, which, by the kindness of the landlady (a remarkably civil woman), who removed the glass that covered her treasure, I was enabled to do. The creature (a gentleman, not a lady specimen of the tribe) was from three to four feet long. The upper part of its body was composed of the head, arms and trunk of a monkey, and the lower part of a fish, which appeared to me to be a common hake; and the head was really a wonderful composition: the parchment-like hideous ears stood well forward, the skin of the nose when soft had been moulded into a decided specimen of “the snub,” the forehead was wrinkled into a frown, and the mouth “grinned a ghastly grin;” the curled lips partly concealed a row of teeth, which in the upper jaw were of conical form and sharp-pointed, taken probably from the head of a hake, whose body formed the lower part of our specimen. the lower jaw contained these fish’s teeth, but conspicuously in front was inserted a human incisor or front tooth, and a vacant cavity showed that there once had been a pair of them. These were probably placed there to show the “real human nature” of the monster. The head had once been covered with hair; but visitors, anxious to obtain a lock of a merman’s hair, had so plucked his unfortunate wig that only a few scattered hairs remained: the relic-seekers are now, therefore, ignorantly treasuring in their cabinets [of curiosities] hairs from the pate of an old red monkey.

Buckland also examined a mermaid, about “half the size of her partner”. It, too, was formed from a monkey and a fish, but this time with glass doll’s eyes rather than the leather ones of the merman, that had pupils marked in black ink.

The popularity of such exhibits waned in the mid-Nineteenth Century and Buckland comments “The good folks of England are getting every year more and more educated, and mermaids do not take so well now as formerly..”. 2 The legendary P. T. Barnum advertised the mermaid in his museum with a highly imaginative painting to attract in customers. Of course, he knew the exhibit was not a mermaid and “Mr Barnum confessed that he did not pursue his studies in Natural History too far, or he might learn too much.” 2 Barnum justified the confidence trick by making no extra charge and there were many other things for visitors to see. He was a showman after all.

Any Natural Historian would see immediately that these exhibited mermen and mermaids were manufactured, yet reports of these creatures in their natural environment have been made by generations of sailors. These may have been sightings of sea mammals, especially manatees (left, below) and dugongs (right, below). One can only conclude that they were distant sightings to merit the belief that they were mermen or mermaids, or perhaps the sailors had been too long at sea and their imaginations had become overdeveloped?

Although no-one can believe in their existence in the real world, mermaids have had a lasting appeal in fiction, film and other media. After all, they come from another world and thus fit into the niche also occupied by angels, fairies and dragons. The best known story is The Little Mermaid by H C Andersen 3 and this formed the basis for the Disney film of the same name. Andersen describes how mermaids lived at the bottom of the ocean and had a class system, with at least one Royal Family that had six Princesses:

The whole day long they used to play in the palace, down in the great halls where live flowers grew on the walls. Whenever the high amber windows were thrown open the fish would swim in, just as swallows dart into our rooms when we open the windows. But these fish, now, would swim right up to the little princesses to eat out of their hands and let themselves be petted.. .. Each little princess had her own small garden plot, where she could dig and plant whatever she liked..

The story continues by describing how the princesses were allowed to swim to the surface of the ocean for the first time on their fifteenth birthday, reporting back on what each had seen. The youngest princess heard all the amazing descriptions, but had to wait and wait for her turn. When the day came and she arrived at the surface, she saw a handsome prince and rescued him from drowning after he became unconscious. The mermaid princess wanted to marry the prince, not only for love, but also to acquire immortality of the soul, as this was a feature of humans that mermaids lacked, but which could be acquired through marriage. The transformation from fish tail into “props” (legs) required a special potion prepared by an underwater witch - who improbably boiled the ingredients in “a caldron over the flames”. 3 The famous statue of the Little Mermaid in Copenhagen celebrates the transition to props from the fish tail and that explains why it appears like a nude of the period, with the outline of the tail barely visible. In the Disney film, which uses only superficial features of the complex story told by Andersen, the youngest princess appears as a mermaid Barbie Doll, with what appears to be a pull-on lower fish section and discretion maintained by having a bikini top. 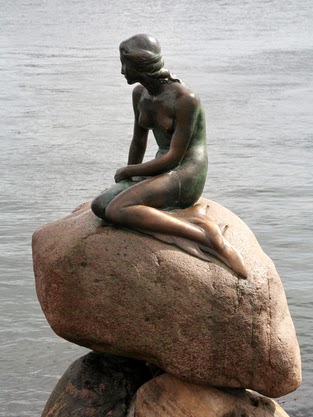 One’s rational side finds all this a bit much, but the mermaids and mermen in museums, side shows and literature are very obviously fantasy creatures and we can all enjoy that. In a wider context, there must be other imaginary things that we take to be real, but it is not always easy to see that this is so. Hopefully, Natural Historians are better able to differentiate the two, just as Barnum intimated.