Many Natural Historians in the Nineteenth Century faced a challenge when illustrating their work. Unless they were gifted painters, like John James Audubon or Philip Henry Gosse, they could either make “word pictures” of what they saw, or produce sketchy illustrations. Of course, they could commission an artist to produce work, but this could never have the personal touch conveyed by the Natural Historians themselves. Drawing and painting skills could be acquired, but constant practice and the development of technique was then needed. Even with this practice, success depended on talent, both for observation and for the meticulous use of brushes, pens or other tools.

In the age of digital photography we can all produce excellent images of plants and animals, although not all of us have the eye of someone like Matt Coors, and we can use photomicroscopes and electron microscopes to obtain images of minute objects. In earlier times we had photographic film, the first being produced in 1884, and before that plates had to be used. Plate cameras required long exposures and were therefore not suitable for obtaining images of moving objects, or even those which swayed gently in the breeze, and certainly not those which were only a short distance from the observer.

One solution to the problem of illustration for the Nineteenth Century Natural Historian was the development of Nature Printing, especially for producing images of butterflies and moths. These insects were collected enthusiastically by explorers, missionaries and colonisers, resulting in pinned collections of dead insects in drawer after drawer of cabinets, or mounted into an artistic display. We are all familiar with herbarium collections of dried plants and the use of pressed flowers in illustration but they are not permanent, whereas Nature Prints are. They provided descriptions of butterflies and moths for those who could not visit museums and other collections to see preserved specimens, and adherents of the technique believed it was superior to any painting or drawing.

A handbook for those interested in Nature Printing butterflies and moths was published by “A.M.C.” in 1879.1 He details five separate methods, the best known of which is the Gum Process, which had its origins in the preparations made by French missionaries in India. Firstly, a piece of high quality paper is folded and the inner surface coated with Gum Arabic (“the very best and clearest which can be had”) using a finger. The wings are then cut from butterflies (or moths) and laid on the paper which is then re-folded to ensure that each side of the wing is attached to the glue. Then begins a lengthy rubbing process to ensure adhesion of the scales and this ends with a rapid pulling apart of the folded paper. The wing membrane should now remain, with the scales of the upper and lower surface stuck into the gum. After drying, the paper is cut around the outline of the wings and each preparation is then ready for mounting.

Wonderful examples of Nature Printing are given in Joseph Merrin’s book Butterflying with the poets; a picture of the poetical aspect of butterfly life 2 produced in 1864, thirteen years before A.M.C.’s handbook. Thanks to Valerie McAtear, the Librarian of the Royal Entomological Society of London, I was able to look closely at a copy of this book and also take photographs, a selection of which is shown below. 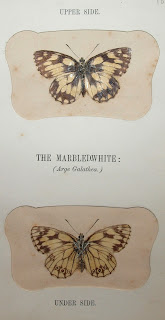 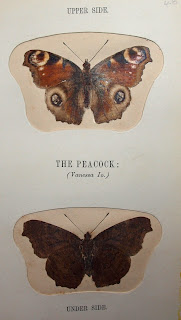 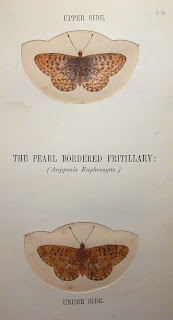 Merrin mounted each paper outline and then used pressed bodies of the butterflies to give a “realistic” appearance, although the antennae were drawn in ink in all the illustrations. It is a lovely book and the author writes:

... the process of Nature-Printing, as applicable to the Lepidoptera, which the Author has improved, rend[ers] possible the permanent transfer to paper of the scales, and consequently the colours, of the insects themselves. By this means all the delicate varieties of shade, marking, and colour are faithfully preserved, and a brilliant reality given to the representation, of which the most carefully finished portrait of the artist would be deficient. The number of specimens obtainable is, however, so limited, and the manipulative labour required to prepare the impressions from them so great, that the price of any work giving this novel and beautiful species of illustration, must necessarily be high and the numbers of copies executed very limited.

So, there we have the downside of using the technique and we can only wonder at the industry and patience that must have been required; all for little gain in terms of the few books produced. It makes handling a volume like Merrin’s a privilege, especially in our current age of instant, high-quality illustrations.

2 Joseph Merrin (1864) Butterflying with the poets; a picture of the poetical aspect of butterfly life. London: Longman, Green, Longman, Roberts, and Green.