As a boy, I attended Winner Street Baptist Church in Paignton with the rest of my family 1 and remember well the plain surroundings and pews shown in the illustration from 1943 shown below. However, there were changes from this view, as the organ was re-located to the left in 1951 and a new pulpit was positioned “as near to the front of the platform as possible, as several friends had difficulty hearing the preacher”. 2 It was in this modified form that I remembered the pulpit end of the church, until I left as a young teenager, beginning a new path away from organised religion. 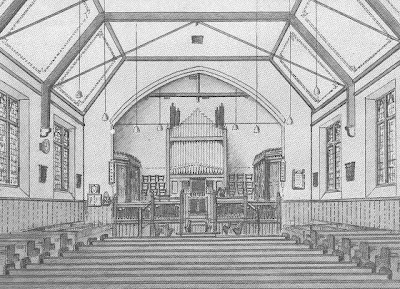 The minister during my time at Winner Street was the Reverend Leonard C. Wilson and he wore a suit, dark shirt with dog collar, and an academic-style gown when preaching and conducting services. As no academic hood was worn, the appearance of our Minister was as plain as his surroundings and some of the more evangelical Baptist ministers in Torbay wore a suit and tie, being indistinguishable in appearance from their congregation. Yet vicars in the Church of England, and priests in the Roman Catholic Church, dressed in special uniforms, as did the choirboys in those churches. The members of the choir at Winner Street, of which I was one, wore just Sunday-best clothes.

I’m impressed by the vestments worn by clerics in the Catholic and Anglican traditions, but have no knowledge of the significance of the different types worn. Bishops are distinguished by having copes and mitres (and various other bits and pieces) and these appear to come in a broad range of colours and patterns, while conforming to the same basic style: 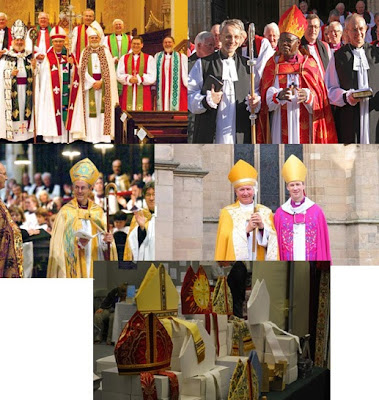 How are the garments chosen by the bishops - or are they chosen for them? Is it a matter of fashion, with some vestments being considered more racy than others, like the “1960s hotrod flames” on Archbishop Sentamu’s mitre in the illustration above (top right). Was that meant to be entertaining and thus “in touch with the people”, as that good man appears to be? Gold seems to feature as a colour in several of the designs, but is that a reference to wealth and power, or to something else? What is the link between the colours and patterns of the vestments and the singular message of Christianity - that Christ died for our sins? Is the colour scheme and appearance of the garments intended as some form of mystery? There are clearly very good answers to my questions and I am not tempted to go as far as Federico Fellini in suggesting that vanity may also come into play. The “ecclesiastical fashion parade” in the wonderful Roma struck a chord with me when I first saw it and, if you haven’t it, a clip from the film can be viewed here (please use the full-screen mode, if possible):

Of course, some of my bemusement stems from puritan roots and the plainness of Winner Street Baptist Church and its services. Yet Baptists enjoy visual myths from the Catholic tradition, such as angels being human beings with bird wings attached to their backs, so why not spice up their ceremonies with a bit of colour and dressing-up? After all, it’s about a theatrical performance, as anyone who has witnessed evangelical Baptists in action will agree.