In The Romance of Natural History, 1 Henry Gosse writes:

There is a sea-weed, the Nereocystis, which grows on the north-west shores of America, which has a stem no thicker than whipcord, but upwards of three hundred feet in length, bearing at its free extremity a huge hollow bladder, shaped like a barrel, six or seven feet long, and crowned with a tuft of more than fifty forked leaves, each from thirty to forty feet in length. The vesicle, being filled with air, buoys up this immense frond, which lies stretched along the surface of the sea: here the sea-otter has his favourite lair, resting himself upon the vesicle, or hiding among the leaves, while he pursues his fishing. The cord-like stem which anchors this floating tree must be of considerable strength; and, accordingly, we find it used as a fishing-line by the natives of the coast.

The quotation is from a chapter entitled “Vast” in this splendid book, written when Gosse was full of enthusiasm, 2 and it reveals his sense of wonder at the size of such a plant. However, the account was not based on Henry’s own observations and the dimensions of Nereocystis are exaggerated, something which would not have occurred if the description was first-hand. Some of the terms used - leaves and stem, for example - are not helpful, as Nereocystis is a brown alga and those terms are more commonly retained for more advanced plants. Each individual alga is anchored to the substratum by a holdfast and linked to the gas-filled vesicle and fronds at the surface by the very long stipe. The holdfast is not used for uptake, and there is little transport of liquids within the stipe, so the only analogy to the stem of higher plants is the supportive function, enabling the fronds, with their flotation device, to remain at, or near, the water surface. This allows the greatest capture of sunlight by chlorophyll in the cells of the fronds, but it should be remembered that the growth of the stipe from the substratum to the surface is also fuelled by photosynthesis. The algae can only grow in clear waters, and their rate of growth is impressive, with more than 10 cm per day being common. They rarely live for more than 18 months.

Henry Gosse was quite right in suggesting that the stipe needs to be strong and it must overcome both pulling and bending forces. To cope with these stresses, it has an interesting internal structure. Below is a diagram from my lecture notes and based on descriptions in a research paper by Koehl & Wainwright 3 (I always drew a copy on the board but, as is obvious from these sketches, my drawing skills were poor compared to those of Henry Gosse): 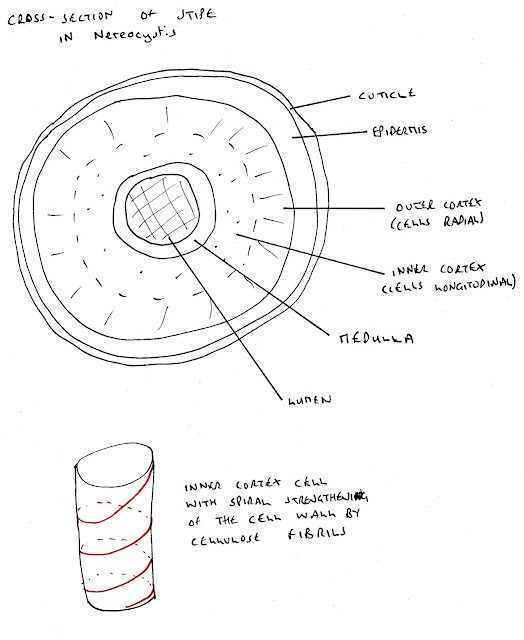 The cuticle provides resistance against abrasion, but the key structures are the lumen (space) running through the stipe and the structure of the cortex, which has two distinct parts. As in a scaffolding pole, the lumen provides resistance to bending pressure, so that it is much more difficult to collapse than would be the case if the same amount of tissue was used to grow a solid stipe. The cortex prevents breakage of the stipe, something which would cause the fronds to be washed out to sea or on to shore. In the outer cortex the cells are arranged radially and bending can cause these cells to split apart, absorbing some of the effects of strong lateral pressure. The cells of the inner cortex, in contrast, are arranged in parallel with the main axis of the stipe and pulling therefore causes them to stretch, a force which is resisted by the spiral arrangement of cellulose strengthening, transferring the force longitudinally and laterally. Put simply, the structure of the stipe is a very elegant engineering solution for resisting the forces that are likely to break it, although breakages do occur during heavy seas.

My description of Nereocystis in lectures showed clearly my sense of awe when considering its structure and, at this point, I always asked “How did this evolve?”. It is easy to see how such a structure could be designed by a highly skilled engineer, but how could it be done when the cells of the stipe are living and generate the whole structure by their own growth and reproduction - and without external tools? If that prospect seems extraordinary, then how did all the changes required occur through the evolution of ancestral plants? My question to the students was one that I was fond of making, to get the class thinking about the complexity of Nature and of evolution. Occasionally, a student felt that, by posing this question, I must be a Creationist like Henry Gosse, but I am not. I cannot begin to provide an answer and that came as a shock to one individual who, in the anonymous reviews completed by students at the end of each course, stated that it was my job as a teacher to provide answers to questions. If only I could.