Creation or evolution (again)? - The strange life of hydrothermal vents


Henry Gosse was at the forefront of the growing interest both in sea life and in aquaria during the Nineteenth Century. In The Romance of Natural History (1860) he wrote: “Almost as little known as the heart of Africa are the depths of ocean[s]. The eye penetrates in the clear crystalline sea a few fathoms down, and beholds mailed and glittering forms flitting by; the dredge gathers its scrapings; divers plunge out of sight, and bring up pearls; and the sounding-lead goes down, down, down, hundreds of fathoms, and when it comes up, we gaze with eager eyes to see what adheres to the tallow ‘arming’; the tiny shells, the frustules of diatoms, even the atoms of coral sand,-curious to learn what is at the bottom of the deep. But, after all, it is much like the brick which the Greek fool carried about as a sample of the house he had to let.”

How fascinated he would be by our ability to view the deep sea today, albeit just a tiny fraction of it. There is a huge volume of water in the oceans and most of it is in darkness, descending several kilometres to the ocean floor. Using submersibles, we can venture down to take a look, but it is very different to our ability to explore land, where travel is easy and there are no problems with pressure, or with a supply of air, or with lack of light. To extend Henry Gosse’s analogy, we certainly know much more about the heart of Africa today than we do about the deep sea.

It was only decades ago that we first discovered the presence of hydrothermal vents on the ocean floor and we now know they take various forms: http://www.bbc.co.uk/nature/habitats/Hydrothermal_vent All produce plumes of hot water, with the hottest having “black smokers” which exude water rich in chemicals from the Earth’s crust, the temperature of the plume being up to 400oC. “Black smoker” is a good description, as the column of water contains many small sulphide-rich particles which are precipitated as the water cools, forming a chimney around the vent and shooting a column of what looks superficially like smoke into the water. 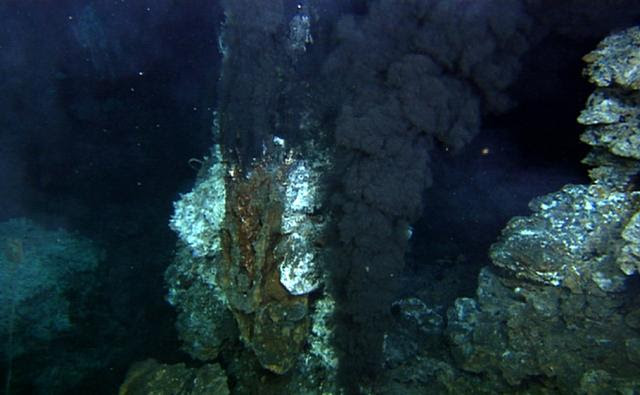 One of the characteristics of regions with black smokers is the abundance of animals that they contain and I will describe just one example - the vestimentiferan worms - that have come to characterise these communities (there are also many bivalve molluscs, crustaceans, and other types of animal).Vestimentiferan worms are long as adults (up to 2 m) and the anterior of each worm can be extended from its tube, and also withdrawn: http://www.noc.soton.ac.uk/chess/science/images/riftia_fish_hq.jpg

What would Henry Gosse have made of them? I think he would have been thrilled to discover these extraordinary examples of God’s Creation existing in such a remote location. They have characteristics of worms which live in tubes elsewhere in oceans, but the tube worms of ocean margins have feeding organs, covered with secreted mucus, which allow them to capture tiny particles. These particles (together with anything else which sticks to the mucus) are conveyed to the mouth by tiny moving hairs (cilia) and are then ingested. The package of particles and mucus passes through the digestive tract and it is from this that the tube worms gain their nutrition. Some of the particles will be algae and bacteria, some made up of dead organic matter, but all will have resulted originally from solar energy trapped by photosynthesis.

Close examination of vestimentiferan worms shows that they do not have a digestive tract, so what do they feed on and how do they gain the nutrition needed to achieve their large size? These are questions that would certainly have puzzled Henry Gosse and it took Biologists some time to provide answers. Like many soft-bodied marine creatures, the worms are able to absorb dissolved matter across their body wall and this is rich in sulphides from the water which emanates from the black smokers. These chemicals are concentrated in some hydrothermal vents, but will not supply much of the nutritional needs of the vestimentiferans. The secret lies in having large numbers of bacteria living within the tissues of the worms. These bacteria lie at the base of hydrothermal vent food chains and they coat all surfaces; explaining why sulphide particles are ingested by bivalves and also by crustaceans (both stripping off these nutritious coatings inside their digestive tracts). The bacteria use sulphides as a source of energy, just as surface-dwelling organisms use light in photosynthesis. It is termed chemosynthesis and the bacteria living and growing within vestimentiferan worm tissues are able to secrete organic compounds that the worms use for their own growth.

Of course, this leads to further questions: how did the association between bacteria and vestimentiferan worms arise and how did the relatives of surface water tube worms end up at hydrothermal vents? Henry Gosse would repeat that this was by the act of Creation and that is a convenient answer. If one doesn’t believe in this explanation, then how did hydrothermal vent communities come into existence and how did their association with chemosynthetic bacteria come about? I think I have the answers, but I’m not sure. That’s the problem with evolution; there are so many developments that we can only speculate about, as they happened over such a long time period so long ago.